Our usual routines involved working for Cencorp and Crocs, and doing housework, and yard work this week In addition- Jimi took Jennifer's and Tyler's Senior pictures.I have not seen the finished products yet, but a few of the raw pictures I saw are really good. Jimi has been answering freelance work from Craig's List. There is a lot of stuff out there, but also are a lot of responses to the ads. He is hopeful. I had dinner with my girlfriend, Brenda on Wednesday. She lives in Greeley and it's not often that we are able to get together. Our visits are few and far between. I signed up for a creative writing class at the college, which begins towards the end of August. I am looking forward to that.

We took a nice loop on the motorcycles from SW Longmont, to NE Boulder, to SE Lyons, to NW Longmont, and back home to SW Longmont; the trip took us an hour. It was the longest and farthest I have ridden my new bike; it was awesome - I loved it. There was some traffic out - not a whole lot; however, I think I did pretty well and I felt comfortable with the ride.

We went to the Ocean Minded/Crocs 2010 launch party. We only stayed long enough to glance around at the shoes, ate a few appetizers, and had a drink. Jimi found some shoes he may like and I will keep my eyes open for their release.

Our good friend and Jimi's long time friend, Matt, moved from Michigan to Colorado this week. We are happy to have him around again. We will have fun times hanging out together for sure.

Friday morning we took our little sailboat to Granby, Colorado. We camped for two nights and three days. Our plan was to sail for the three days also; however, the first day we had light storms. We got some really good sailing in on Saturday though. The waters were really rough and the wind was really blowing. The boat was doing nearly 7mph, which is relatively fast for a sailboat. I particularly learned a lot and for the first time was able to understand some of what I've read and put it to use. While I still need Jimi's direction - the light bulb got a little brighter. We started out with a full main sail and full jibb. WOW - we were flying and had to be on top of every little thing: the wakes, the wind change and even our placement in the boat. We stopped at the first island to walk around and get a bite to eat, at which time Jimi decided to take down the jibb all together and reef the sail. Reefing the sail means to only use a portion of it during sailing. We had never done that before and it proved to be the right thing to do. Once we set out again, we learned that we could go just as fast, with half the main sail and no jibb, and yet the boat was easier to handle and not as unstable. We took Miller with us on the boat and as usual he did fabulous. He was a little uneasy at first, but it only took him about ten minutes to get comfortable and it was like he's been doing it all his life. We woke up Sunday to calm waters. Waiting around for a few hours, we were hoping the winds would pick up and we could sail again before heading home, but mother nature sent us home. 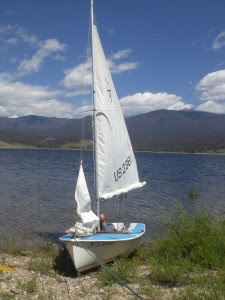 Two movies we watched this week were "i, Robot" with Will Smith (well, Jimi watched and I slept through it) and an old Alfred Hitchcock movie "The Birds". Both movies were good.

No more news on buyers for my house. I'm still receiving calls, but I have not received an offer yet.

That's all for this week folks! We trust all is well with you.