I have finally gotten around to writing you about our trip down the river.We spent four days on the river motoring Sanibel West across Florida 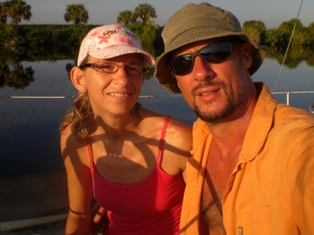 Our adventure began on Wednesday as we rushed to get everything together. We went to the grocery store buying enough nonperishable food for a minimum of four days. We piled everything we thought we would need in the living room and dropped the car off at our final destination.

Early Thursday morning we loaded the pickup and made the three hour trip to Indiantown. This is where the hard work began. We had about two hours to get the boat ready before the marina employees would come get her, but we had an entire days worth of work that needed to be done. Jimi worked aimlessly, while I filled the gas cans and put things away. He removed the battery from his truck hooking it up to the outboard motor and he got the bilge pump working. For a brief moment we discussed and considered cancelling the 'put in' and rescheduling it for the next day. But we decided to push on and go for it. We were scheduled for a 3pm 'put in'; the boat crane showed up at 3:30, giving us a little extra time. 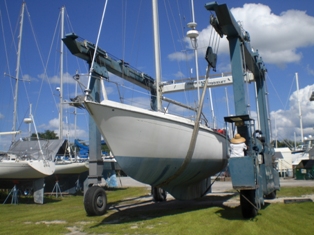 And then Sanibel felt the water on her back bone and belly around 4 pm. After six years of dry dock and neglect she sat there floating like a proWe were so relieved. Not once during the trip did she take on any water. She is solid and we couldn't be happier. 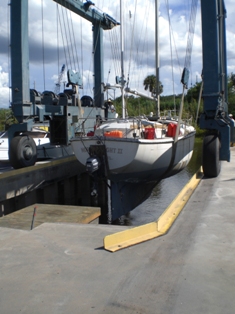 We stayed docked for a while, but then Jimi noticed weather heading our way and decided we had better get going to make it to our first destination. Just ten minutes down the river it began raining. It was a turental down poor, common for this area. Jimi looked so cute at the helm, soak and wet, as I watched from the cabin below. I wish I had taken a picture. Then it quit as fast as it began. Before long we reached our first bridge The bridge had a 51 foot clearance and our mast is 50 feet. It would be close. We were very nervous, but had no choice than go for it. We sat there speechless looking up wondering if our mast would clear the bridge. Once it was over, we just looked at each other in disbelief. We made it. Up ahead was our destination point. We veered right to tie up to some dolphins on our starboard side until we realized we were no longer moving. We finally figured out we were stuck in the mud. After several attempts to free ourselves including Jimi getting in the alligator infested waters, we settled for the evening and scheduled a tow for the morning 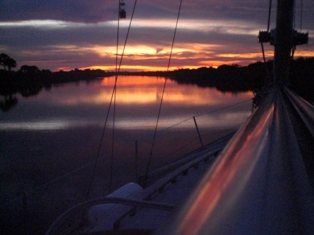 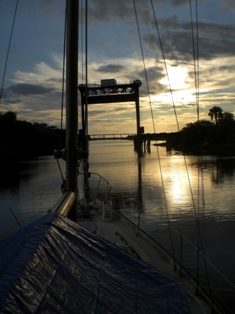 When we woke in the morning going about our morning rituals, we realized we were moving a littler free er than the night before; just a little sway here and there. We suspected we could free our selves and we did. I cancelled the tow and we headed on. Just ahead was the lock to Lake Okeechobee. Jimi radioed the lock master, who opened the gates for us to pass. I felt like I had just been released from prison. We went from the small river lined with trees and alligators to a vast free world of open space. What seemed like just minutes after passing the lock, the engine shut off and continued to behave poorly. I would restart it over and over again, but it was not happy. Not knowing what was wrong, Jimi changed the fuel tank and fuel line out. That did it. We had no problem with the motor again after that. It was tense however. Going through the lake we had to stay in the channel and without any kind of speed we had no steering. So, every time we lost the motor we lost any control we had. 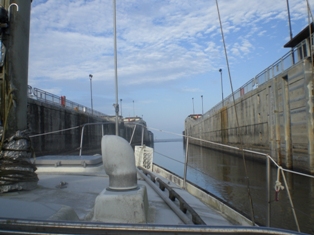 We got through the shallowest parts of the lake with ease. We were gracious enough to give a ride to hundreds of "love bugs". It took us about five hours to cross the lake 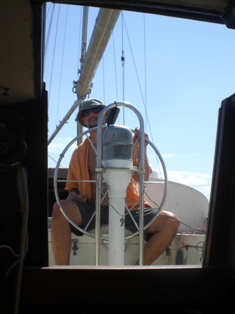 We went through a total of 5 locks, two of which were unique and brought us an array of anxiety and intense feelings. I call them 'fish tanks'. We entered the lock when instructed by the lock master and he closed the gates trapping us in a life size fish tank. Then they would drop the water level. In the first 'fish tank' lock they dropped it eight feet and the second ' fish tank' lock they dropped it 2 feet. Then they opened the opposite gate and we were free to go. Let me just say the second 'fish tank lock' lock went much smoother than the first. :-) The other three locks were gates that the lock master would open for us. We also passed under several bridges that had to be opened for us and some already opened. The railroad bridges mostly stayed open unless a train was coming; however, the highway bridges we had to radio ahead. The bridge master would stop the bridge traffic, open the bridge and let us through. It was really neat. We were lucky enough to get through all the locks and bridges quickly; upon arrival except for one, which we had to wait about an hour before they opened it.

Considering our experience and equipment, the trip went very well. The few hick ups we had hardly seem worth mentioning.

Sanibel weighs 20,000 pounds. Our purpose for the trip was to get her close to home so Jimi could begin her refit. We only had the skeleton of this sea worthy vessel. No instrumentation, other than a hand held GPS and some paper navigation maps, no lights or power to speak of, no running water, stove, refrigeration, and most importantly, no engine. We used a small outboard motor, which could get us up to 6 mph in some places, but had no stopping capabilities. Putting it in reverse did not have the effect a suitable size engine would have. Nevertheless, the outboard motor would get us from point A to point B with careful planning and watchful eyes.

On our final days as we traveled between the barrier islands in the Gulf, dolphins were all around us. A small pod swam along side our boat for ten minutes or so. I hung my arm and hand down the side as they swam with us. My hand was less than two feet from touching them. They blew their blowholes and let out some squeaks, They are beautiful creatures who swim with grace and ease 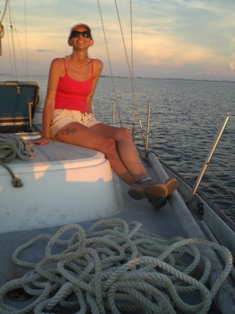 After 73.5 hours we docked at All American in Port Charlotte.

The scariest part of the trip was when we went through our first "fish tank" lock. We were instructed to tie up on the starboard side, but when we couldn't get the boat stopped we landed on the port side. Or maybe the scariest part was trying to keep Jimi from swimming with the alligators.

The most frustrating part was trying to anchor in the river on our second night - but after many many attempts, we did it. Or maybe it was those pesky hitchhikers - the "love bugs". I spent hours swatting at and killing them. They seemed harmless; didn't bite or anything. They just wanted to hang around and became very annoying.

The saddest was the cow who fell down the bank of the river and was stuck in the mud. We circled around trying to scare him to free himself, but he was obviously too exhausted.

The most exciting were the dolphins and the most rewarding was our accomplishment. We did it and we did it as well as could have been expected, if not better 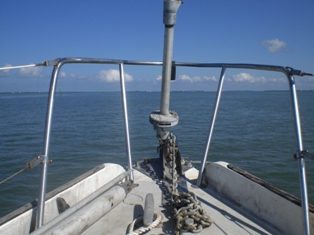 Love everybody,
Lorie & Jimi
Posted by Jim N at 5:51 AM No comments:

I am writing this email from my phone as Jimi drives. The truck is loaded with essentials we'll need for the next five days. We're on our way to Indiantown to finally get Sanibel. She's scheduled to once again float at 3pm today. Jimi is excited and I'm nervous. Lol

We're planning to go about 10 miles tonight. This will get us to the very edge of Lake Okeechobee. We'll anchor there for the night. Tomorrow we're hopong to make it all the way across the lake. We really have no idea how long it will take us to make the 175 mile trip; but we are hoping to be home sometime on Monday.

In other news.....
We did not do anything special for Labor day; just the usual for us. We had a "Planet of the Apes" marathon, watching all five original movies. I painted some garden furniture and we prepared for our trip.

We went to our scheduled court hearing to retrieve money from our last landlord. Rather than going to trial, we opted to settle and are happy with what we got back.

We found a resturaunt down the road from our house, which turned out to be fabulous. Caribean style dining inside or outside on the beautuful covered patio. There was a man playing a metal drum on the patio. It was soothing and relaxing. The wait staff was fast, courteous, and attentive. The food was reasonably priced and, as Jimi would say, off the hook. We'll be going back for sure and hopefully taking friends there in the future.

Jennifer and Tim found an apartment. They're putting down the deposit and will move in next week. With both having full time jobs now, they should be ok. They still need a vehicle to assure they can get to their jobs. But for now Tim has been able to ride with a guy from work and Jennifer has been walking. Continue to keep them in your prayers.

Last I heard from Daniel, he was working 3 jobs. He works at the Dodge dealership from 6am until 1pm. He loves driving all the new vehicles. Last week he posted he got to drive a new 2011 Dodge Charger. He got it up to 5mph in under a second. Haha. He then works another job from 1pm to 5pm and yet another job from 5pm to 9pm. If nothing else, he's keeping busy.

That's all for now.
Love everybody,
Lorie & Jimi
Posted by Jim N at 5:40 AM No comments: