It's been two full weeks of working full time with Jimi on Sanibel. Although things take much longer to accomplish then one would think, we are getting somewhere. Now with me at the boat I am able to take more progress pictures.

Painter George, our boat yard neighbor and friend, was finally able to paint the finishing coat to the upper side of the hull. He sprayed three coats and, man-oh-man, is she shiny. 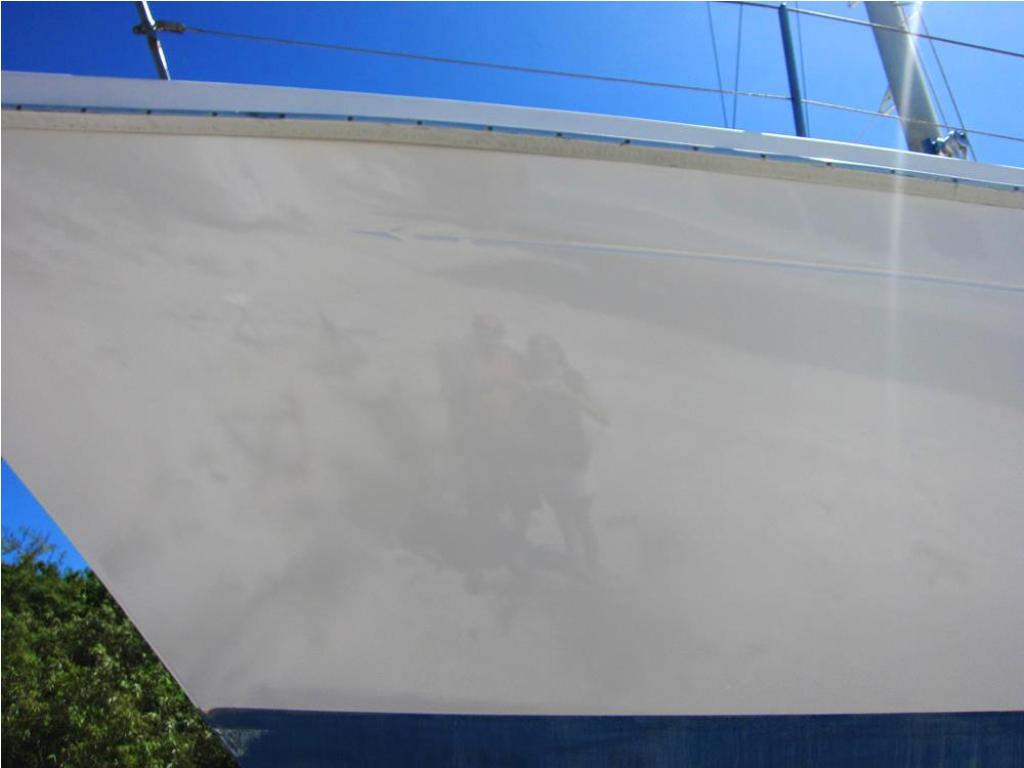 We stare in awe everyday we pull up to work. I've attached a picture; if you look closely, you can see our reflection.


We love it. We've designed the letters, ordered and cut the vinyl of "Sanibel". We'll attach those as soon as the timing is right. Since we'll have our self steering wind vane hanging off the stern, we are not able to signature "Sanibel" on the transom. Instead we'll display it on each side towards the aft. That's all I'll tell you for now - you'll have to wait for pictures.


So, what have we accomplished in two weeks? The first thing we did was follow every wire through out the entire boat either marking it for identification or ripping it out because it was rotten or not needed. This took about two days.


Next we began accessing the 110 situation. We decided on five 110 (AC) outlets: one in the aft vanity, one in the navigation station, one in the saloon, one in the forward vanity, and one in the galley. Even though she will be set up for 12V (DC) power, we'll want to have 110 available in case we need it. We marked, cut and installed all five outlets including running wires from the engine room, where the breaker lives to the terminals and to the outlets. Only five outlets you say - my point exactly when I mention that things take longer than someone might as 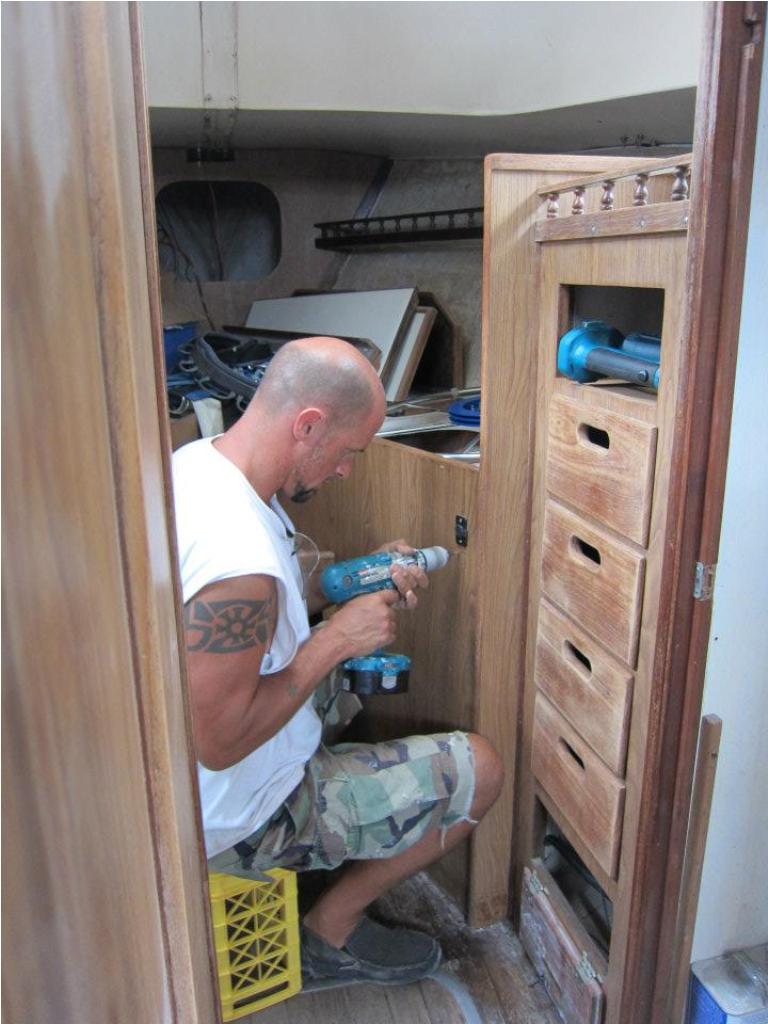 
We have eight 12V outlets: two in the aft berth, two in the navigation station, two in the saloon, and two in the forward berth. Same procedure as the 110, we cut holes, mounted outlets, terminal blocks, and ran the necessary wires.


Additionally five fans will occupy the vessel: two in the aft berth, two in the forward berth, and one in the main cabin area. The wires are run and awaiting mounting. 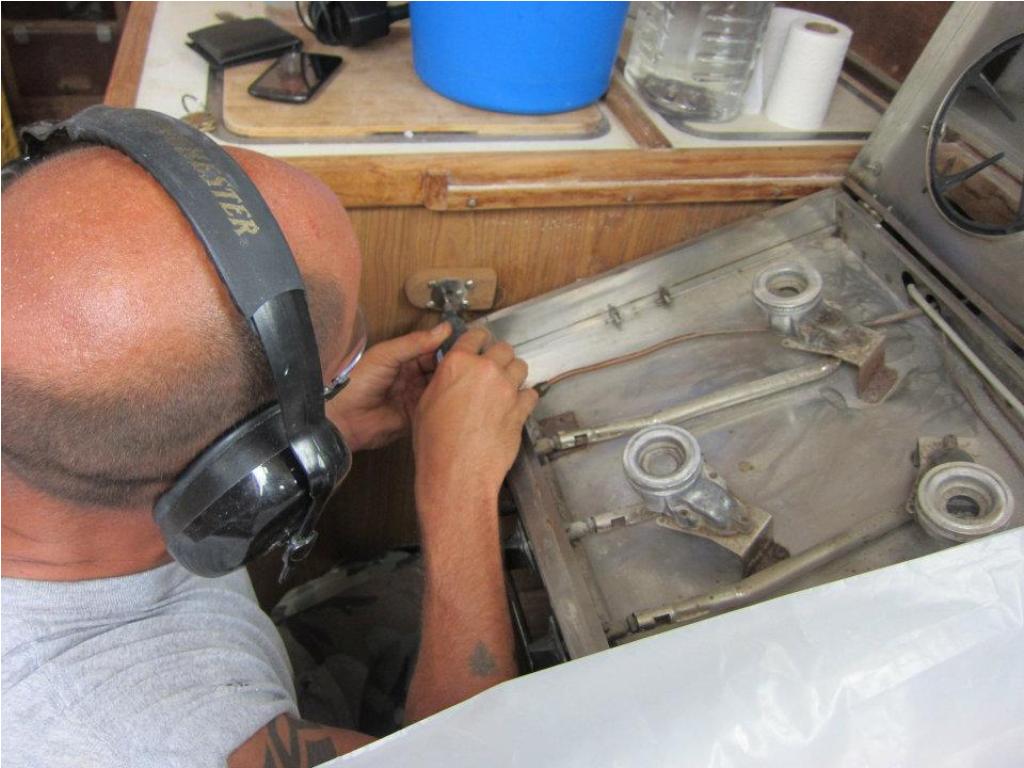 Now for the lights. We had to decide where we wanted lights and run the wires for those accordingly. And how do we turn those lights on? with switches - process repeated again and again. Jimi f 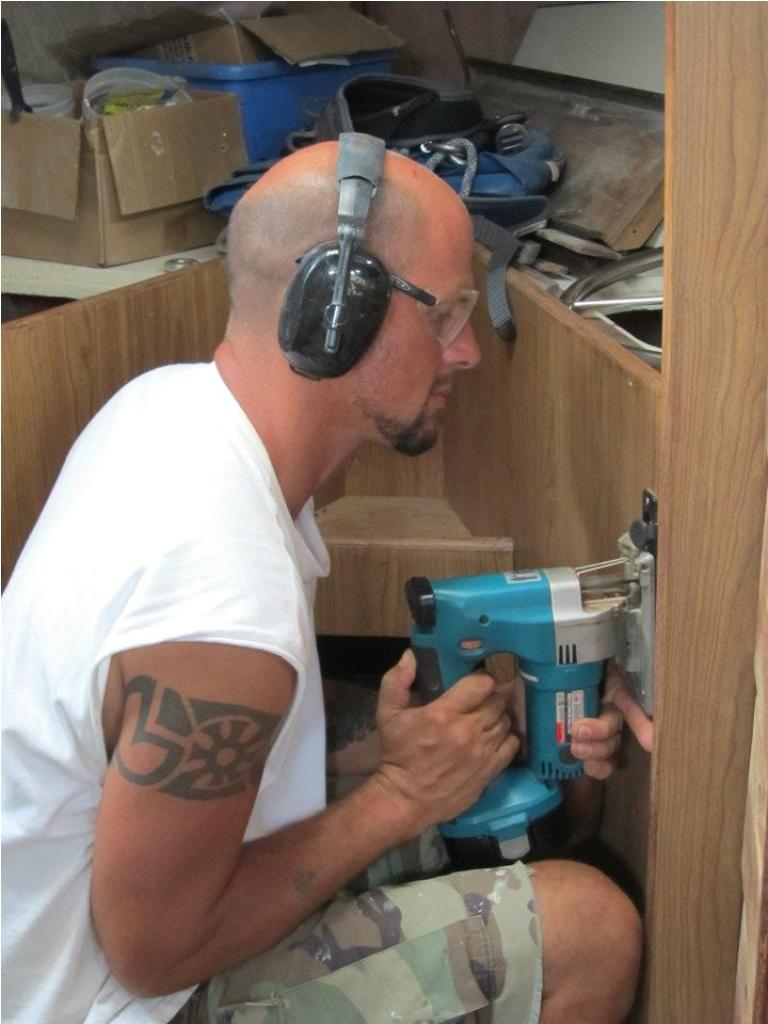 ound these awesome 12V LED lights that can be mounted and hidden under ledges. The bulbs are less than a quarter inch square, each strip has three bulbs embedded in apoxy. As many strips can be mounted together for any length; they are economical and perfect for Sanibel. There are two sets of lights above each side of each berth, each vanity, each head, and four sets in the galley. The navigation station has two sets plus a small lamp. The saloon has an original fixture we decided not to part with and are converting to an LED bulb. The LED bulbs only use 1/10th the power of the original incandescent bulbs which is great for living on battery power. We'll also need to mount some lighting in the work bench area and engine room, but Jimi has not decided on those yet.


As Jimi began to mount the LED lights, he decided he wanted housing for them. Even though they would be mostly concealed, some could be slightly visible. He wanted a more finished touch. He made housing for each set of two from scrap teak. He did a great job; they look fantastic. Of course, they will need to be stained and varnished, which will come la 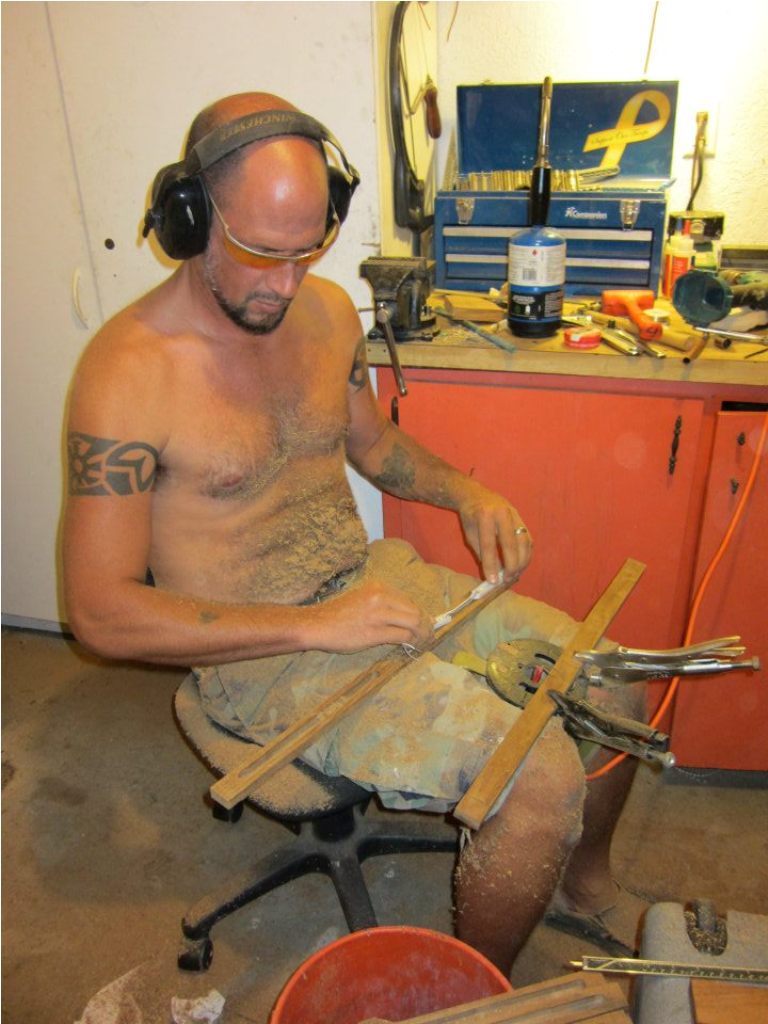 
We ran both 12V and 110 to our refrigerator; however, it is not quite finished. Both the propane lines to the stove and grill have been ran and tested for leaks, as well as the electrical line to the stove/oven. Then we mounted our gas grill just outside the cockpit and set up the propane locker. We also ran various wires to the HAM radio, VHF radio, and the transducer. 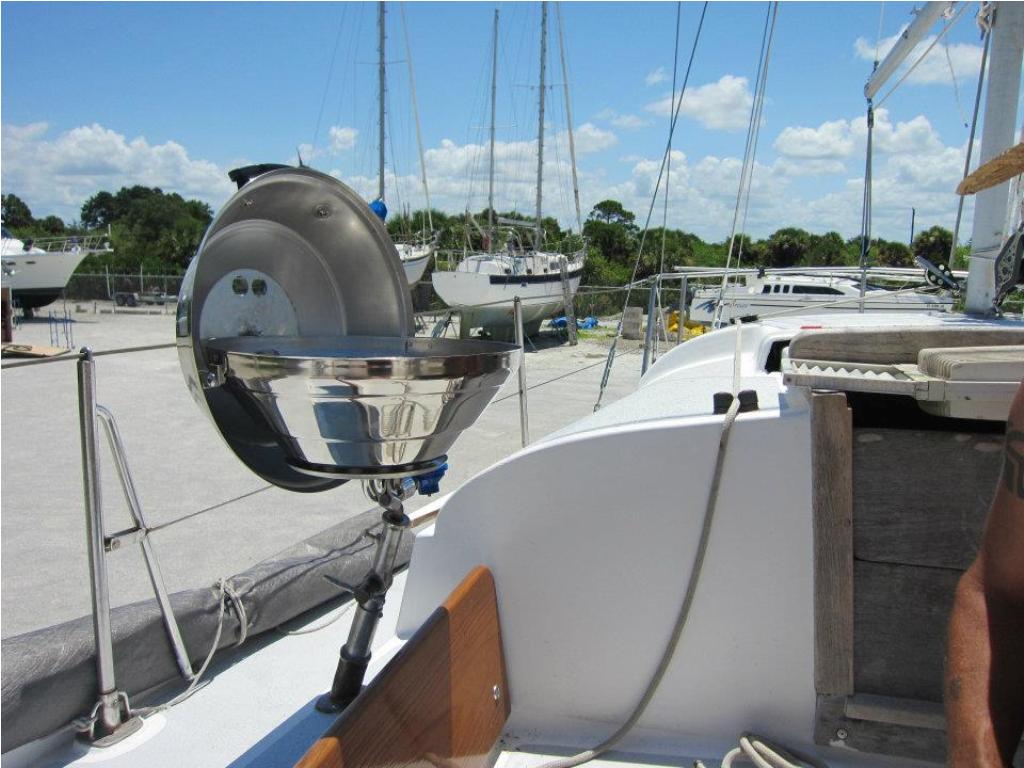 Running these wires was no easy task. The spaces are small, areas are not easy to get to, and there is always the safety factor for the lines to consider Currently everything goes in to the engine room waiting to be hooked up to the breakers. Jimi tells me what we've accomplished so far is actually the easy part. Once we begin working in the engine room it's a whole different animal; to the breaker, from the breaker, to the batteries, solar panels, alternator, engine and the list goes on and on. Something I have to look forward to. :-) Woohoo. 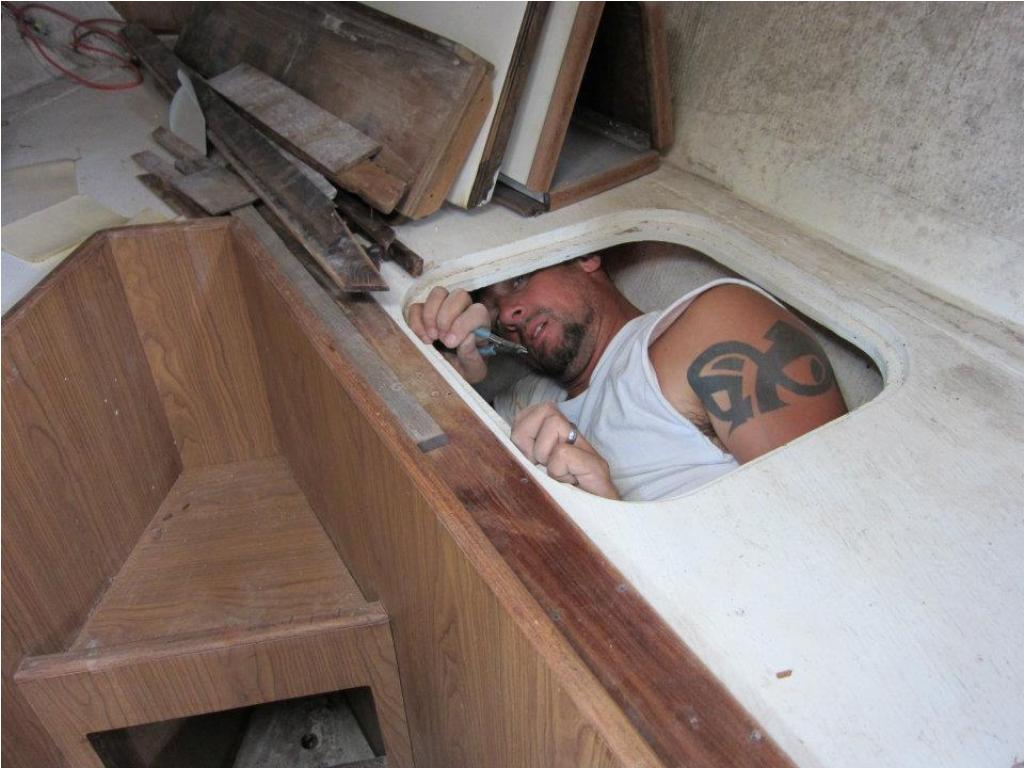 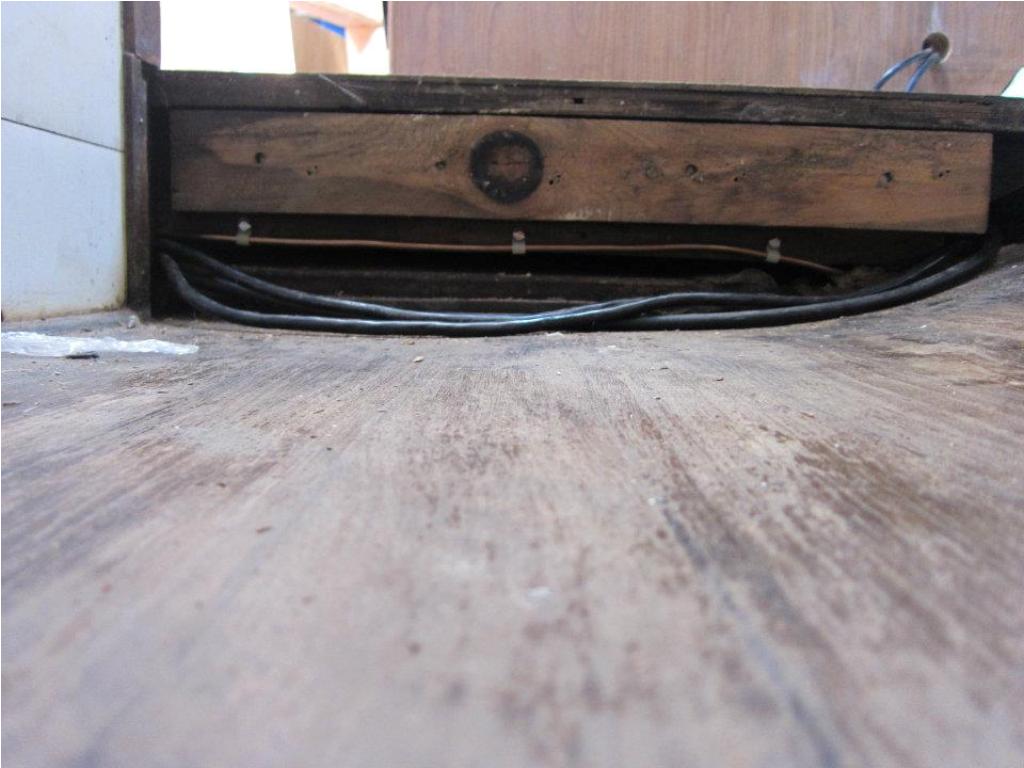 
We sanded and applied the first coat of stain to the remaining teak on the deck. Wow - it's gorgeous. I'm not going to send a picture until it's finished. But, you will be surprised. We made a couple of new boards for our companion ways with a locking system. Now Sanibel is secure and this gives us ease of mind.


I spent the good part of half a day cleaning and organizing, as things were hard to find and cluttered. Now it is so much nicer to work in there and one of my jobs is to keep it that way. We've had cooler weather and some off and on rain lately.


Check us out on Facebook; Sanibel's page is active; you can get fast updates and photos there. Like us and you'll receive notices on your FB newsfeed: We are S/V Sanibel.


A number of pictures are attached this week.

.A quick update this week to bring you up to speed on a few things.


My last day at Cencorp was Wednesday, June 6th....or was it? Not exactly. It was my last day as a full time employee, but I have been convinced to stay on working a few hours each week helping with some miscellaneous tasks.  I will work an hour in the mornings before we head off to Sanibel.


We had a BBQ with friends a couple of weekends ago. Last Sunday we spent the day snorkeling at Siesta Key. It's the perfect time of year for an ocean swim - I love it.


I began my next TEFL class: Teaching English to Young Learners (TEYL). This class will specialize my certificate into the five to thirteen age group.


That's really all we have for you right now. Here are a couple of pics from the beach.

We'll be sure to take more of Sanibel's refitting.