Our week was busy, which in turn made it seem short; though, we enjoyed it.

Jimi went snow boarding with his friends Jussi and Juri on Monday. Monday evening he met up with some class colleagues at the coffee shop for web design talk. I spent the evening working, as well as unpacking, doing laundry, and working around the house.

Rest of the week Jimi continued to work on his studies. He also cleaned out the garage making room for my grandfather's car. I went to work everyday and worked mostly on my scrap booking in the evenings.

Our highlight of the week was from my mom, dad, and great niece's visit. They left Nebraska Friday morning and arrived at our house Friday evening. They brought us a car that had belonged to my grandfather handed down to my father and now handed down to me. It is a 1967 Ford LTD, and being garaged all of it's life, is in very nice condition. The car measures approximately 18'x7'. the garage length and doorway measures approximately 20'x8'. Jimi spent a lot of time earlier in the week making room for it. He had to get rid of a work bench, which we gave to my father, and he had to rearrange other things including his motorcycles. The car is nice and I know we will enjoy having it, but the real treat was mom and dad's visit. 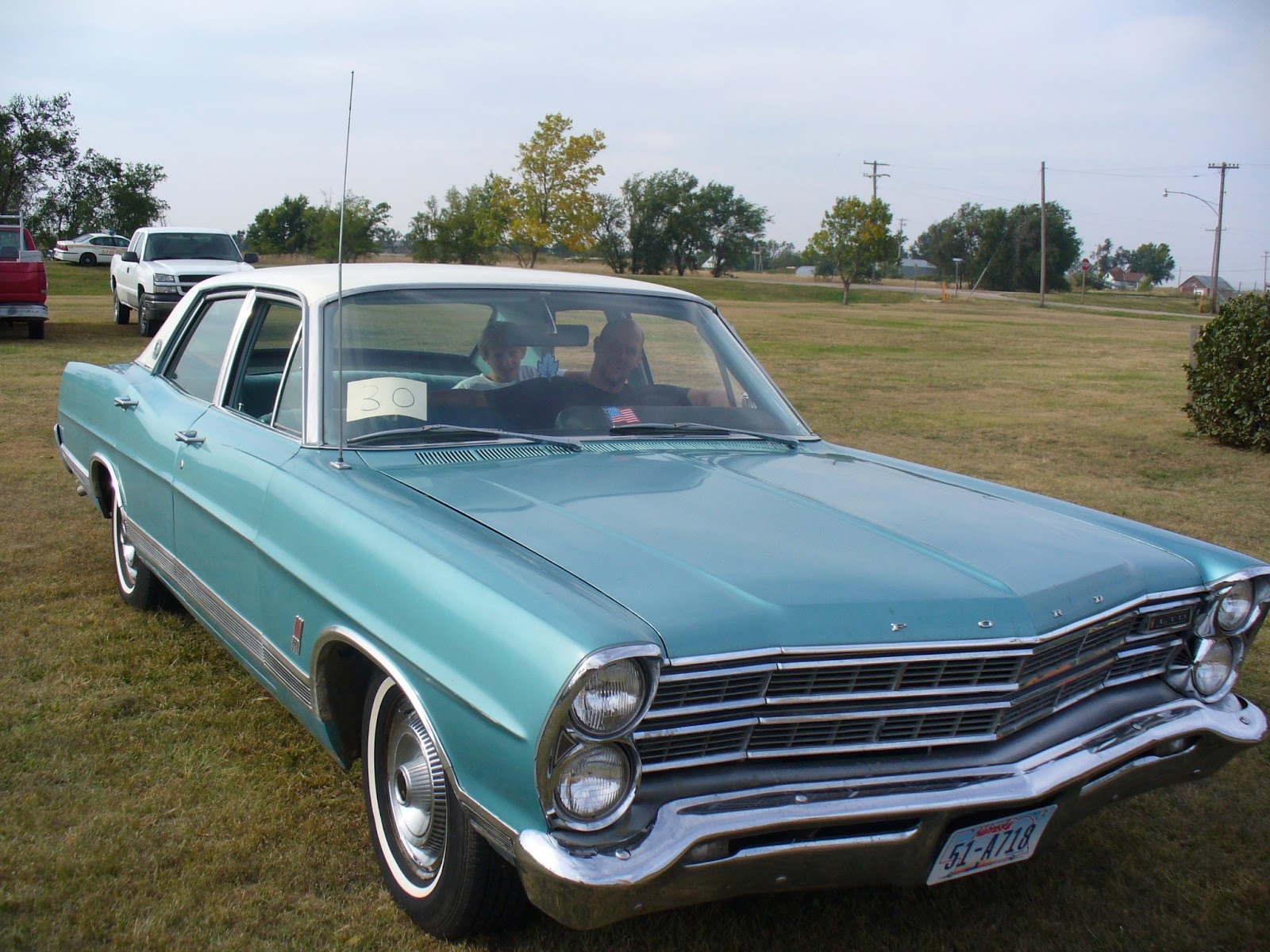 Friday night we visited, and watched a movie. Refreshed on Saturday morning, we took everyone to our favorite breakfast spot, Lucille's. My great niece, Brittany, had never been to the mountains before, so we took a drive up the Peak to Peak Hwy. We made several stops so Brittany could get out and climb a few rocks, walk on the frozen river, and pond, and we toured the 'Chapel on a Rock'. We also stopped in Estes Park for pizza. Brittany was just amazed at the beauty of the mountains. We really enjoyed our day. Jimi really enjoyed the climbing and exploring he and Brittany did. That evening we watched another movie and then went to bed.

Up bright and early Sunday morning, mom, dad, and Brittany packed up for their journey back to Nebraska. Jimi and I went snowboarding for a couple of hours. That afternoon we took the LTD to the car wash and then drove it over to Gunther Toodys (a 50's restaurant) for lunch. Rest of the day/evening was spent on preparing for the week, getting groceries, etc.

Between all of our activities, Jimi would work on trying to recover and restore his laptop. On Thursday his machine bombed out. He lost everything including all his school work, pictures, his portfolio, and even the operating system. He handled it better than I would have. He worked diligently to put everything back and get back on schedule. Of all the files lost, less than 10% were recovered.  I'm sure he will spend a lot of time this week on the recreation. Thinking of you all. Have a wonderful week.
Love Everybody,
Lorie & Jimi

Happy (late) Valentines Day to you!!

The beginning of our week consisted of work, school, and preparing for our three day trip to Las Vegas. We had a fabulous time.

We left about 5am Friday morning and met up with our friends from Michigan, Matt and Alisha, around 10am.

We stayed at the Monte Carlo, which was quite nice. On Friday we settled in our rooms, walked over to Planet Hollywood for lunch and window shopping and stopped at a patio grille for drinks. Jimi & I shared a 'Rum Keg", while Matt & Alisha drank margaritas. We went over to the Bellagio to get our hands wet at gambling. I broke even and Jimi played $10 on roulette and won $50. That evening we went to see 'The Ultimate Variety Show". It was a great show consisting of comedians, magicians, trapeze artists, and gymnasts. After the show, we were all beat, so we called it a night. 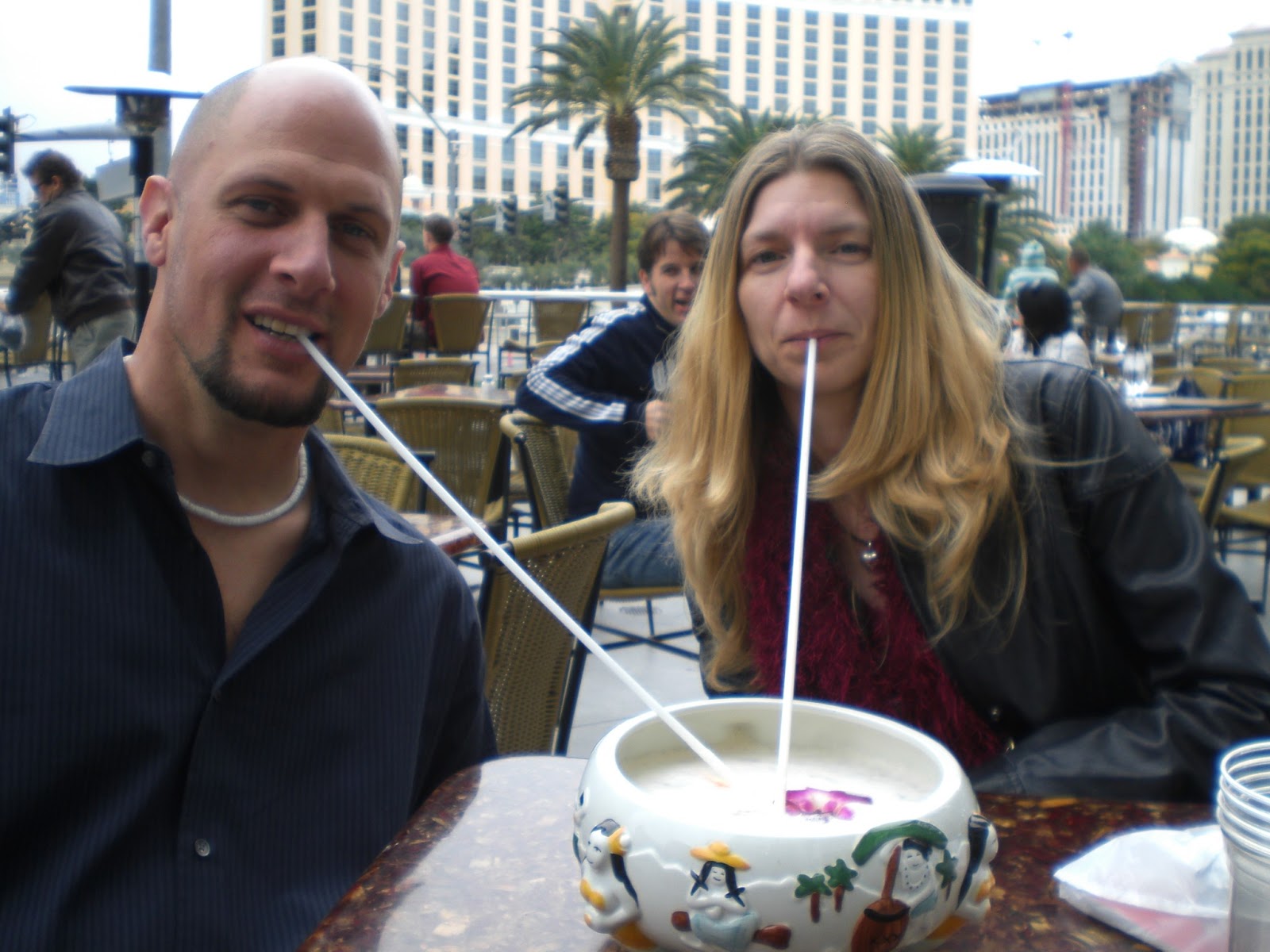 Jimi & I woke early the next morning and went to the casino to film footage for a school project. We also gambled a little: I lost 10 of Jimi's dollars on roulette, as did he. We also got a couple of coffees from Starbucks and some pastries for breakfast. We met up with Matt & Alisha about 11am and headed back over to Planet Hollywood where we ate lunch and began consuming cocktails. We gambled at Planet Hollywood for a while and then at the Monte Carlo. Again, Jimi was the winner. He started with $1 in the nickle slots and won $10. Then he took that $10 and played it on roulette winning $152. After a while, we decided it would be a good idea to take a nap before dinner and the club, as our plans included going dancing in an all night club. We took our naps and then went to eat at an all you can eat Brazilian restaurant; however, Alisha was not feeling well and I was not feeling up to par for the club scene, so after dinner, we took Alisha back to her room, while Matt, Jimi, and I went to the casino lounge. We had a few drinks there and before we knew it it was 1am. I was really sleepy, so we retired for the evening. 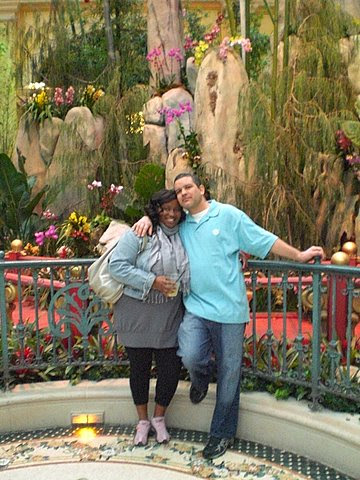 Sunday morning Jimi & I were again up early and went to the casino for coffee and some breakfast. We met up with Matt & Alisha at 11am, which was checkout time. After checking out we stored our bags with the bellhop and set out for the town. We went over to New York New York, the MGM, and Harra's Casino. Finally after years of faithful fan following I got to go to Toby Keith's I Love this Bar and Grill. I was so excited. Alisha, Matt and I all agreed it was the best food we ate while in Vegas and the prices certainly were the best. We hung out there for a while. We gambled a little at Harra's casino and then headed back to the Monte Carlo to collect our bags and then grabbed a taxi for the airport. 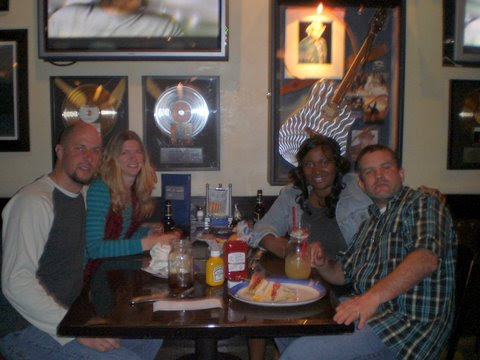 All in all, it was a fabulous time and while we were not able to see everything, for Jimi and I it was enough. We were glad to be back home. We pulled in to our driveway about 11pm, exhausted and without even unpacking we were in bed snoozing.

The morning of Valentines day was very nice. Jimi woke me with "Happy Valentines Day Sweetie, I Love You". I had taken some modeling type photographs of myself (I've been working on them for months) and gave them to him in a photographers proof book and he gave me the perfect card and a beautiful sea turtle necklace.

We hope your Valentines Day was just as wonderful as ours. Happy Valentines! 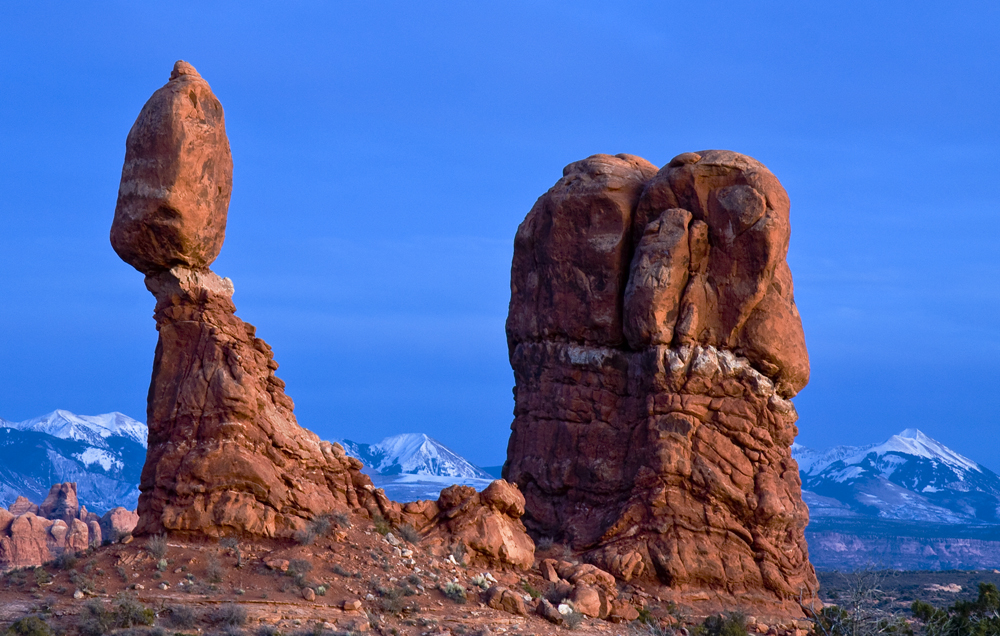 Our weeks will begin to look up again. Jimi has been gloomy because we have not been as active as we normally are, so I tentatively filled our weekends on our google calendar from this weekend through August 2009.

Jimi went to his classes all week as scheduled, just as I worked for both Crocs and Cencorp.

Wednesday night I had dinner with my girlfriend, Brenda and Thursday night I met my girl friend, Jennifer for coffee at the coffee shop.

Jimi picked my daughter up from the airport on Friday. She stayed home for a couple of hours and I did not see her again until Sunday at noon. She had a busy weekend catching up and hanging out with her friends. We spent a few hours together setting up her room, etc..

Jimi and I went snowboarding at Eldora on Saturday morning. We didn't stay very long, but it was a good time anyhow. I am so out of shape and the sport requires a lot of leg strength. Three hours and 7 runs later my legs were like wet noodles. Getting back in to it gradually is the best way to rebuild my muscles and improve my skill. Jimi went on several runs on the black slopes by himself.

After snowboarding we made some very yummy homemade burritos together. We have our technique down and they are gooooood! After eating, we went to my girl friend, Jennifer's house and played Monopoly with her and her boyfriend, Darcy. Jimi and Jennifer had a good time squabbling back and forth. I'm sure I do not need to tell you the outcome of the evening, but I will. Everyone ended up bankrupt and Jimi, again, owned the world.

Sunday morning we met Jennifer and Darcy at the bowling alley. We bowled for a few hours and again, enjoyed ourselves. Rest of the afternoon Jimi immersed himself in his studies, while Jenn and I spent mom daughter time together settling her into her new home. Jennifer then went out with her friends, Jimi continued working on school work and I was left on my own. I watching a couple of movies, painted my fingernails, and played on the internet.

This morning we finalized Jenn’s classes with her counselor. She is enrolled in school and once again attending Longmont High School, just as she was when she moved

It was a fun week and weekend.