It's been just over two weeks and I figured I better give you some kind of update, plus we have some pictures to share.

Jimi found a fairly large crack in the bottom of the bilge; it runs through the middle of the keel and the lowest part of the inside of the boat. After some initial concern, it appears to be non-structural; however, he will assess it more in the future.


He continued to align the prop shaft.


He finished assessing all the standing rigging, wires and their attachments and placed a very large order - three grand worth. It's a big expense but worth the piece of mind at sea.


It's becoming more comfortable climbing to the top of the mast. Attached is a picture Jimi took looking down. If you look closely you can see me on the bow of the boat (right side of the picture). 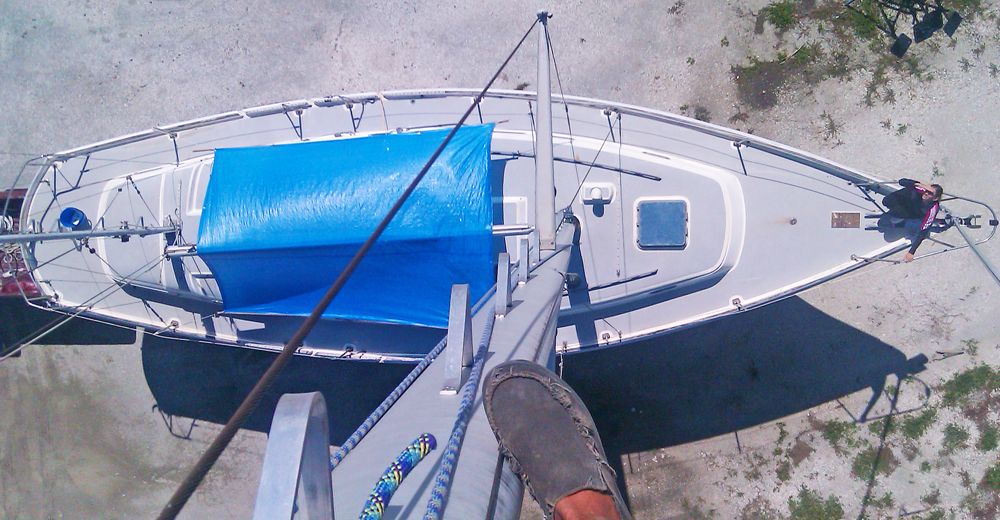 Jimi found a good wind generator on EBay which he will attach to the mizzen mast.


He removed the gimbal stove from the galley and brought it home. He cleaned it up and tested it in the garage. We are pleased to report it works great. He has since re installed it. A gimbal stove is a swinging stove. When not locked in to place it swings as the boat rocks keeping the burners level, so the pots don't fall. It also has rails to keep them in place.


Jimi has done a lot of research on 12 volt refrigeration/freezers. We'll plan on making this purchase from Australia. A product normally used in the outback and draws under 30 amp hours per day of electricity. It will fit nicely in the spot we have for it.


Jimi ordered 600 feet of rope. We only need 400 feet of this rope, but buying it in bulk came out to the same price.


Two weekends ago, we spent the day at Blind Pass Beach. I am amazed at the amount of new shells and shark teeth that wash up. They are so beautiful and never ending. We must have collected a few dozen shark teeth in only a couple of hours.


Last weekend we checked out a new beach and snorkel spot. This place was absolutely amazing. Jimi tried to go out to snorkel, but the visibility was poor. Instead, we explored the beach and rocks. We saw an abundance of sea life including a octopus about 3 inches long. 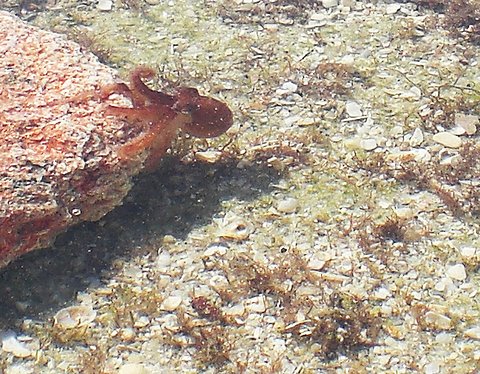 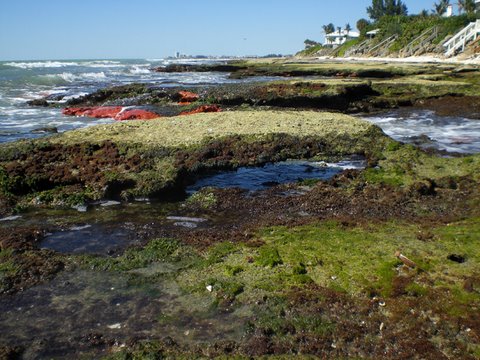 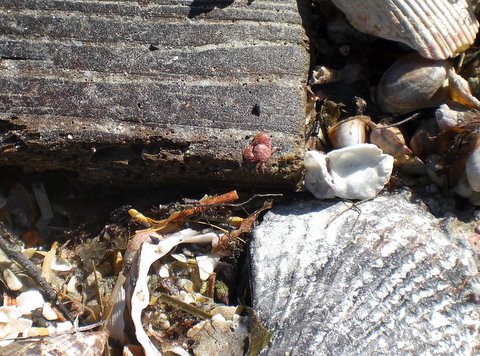 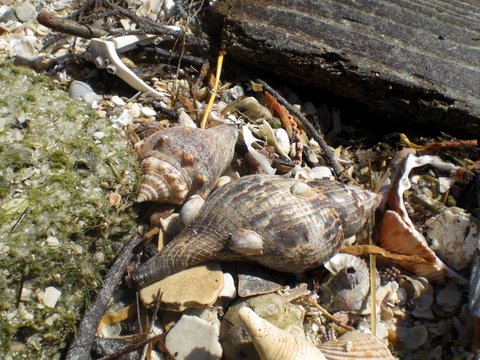 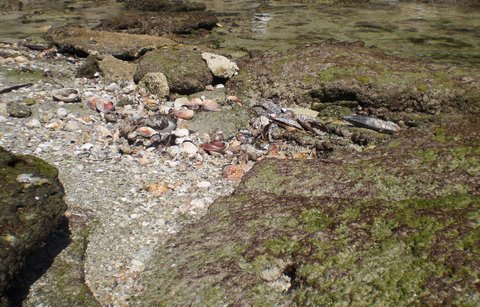 
We celebrated Jimi's birthday on October 15th by going to dinner at our favorite little restaurant here is Englewood.


Well, I suppose that's about all I have for you right now. In the meantime take care and I'll write more later.

Dear Friends and Family,
Just a quick and short update, as requested by a few people. :-)
Progress on the boat: Jimi got the engine running just hours after last week's update. It now pures like an ornery lion.
He finishing installing the mast steps. However, the day he chose to complete the project we had high winds. Jimi was dangling 50+ feet in the air by a rope with tools in hand trying to attach the steps straight and secure. I wasn't there to watch, but I've got a pretty good image in my head. I have to look past the panic of danger and try to picture a humorous scene.
Jimi purchased a newer auto pilot system from our favorite consignment store on the gamble that he could merge it with the existing system on the boat. After playing with the electronics, it's looks at though he will be able to merge the two systems and they should work fine once installed.
He is preparing to address the standing and running rigging, also know as the cables and ropes. More to come on this later.
I am preparing for our wedding, as the day is fast approaching. We are most excited to see our friends and family. I've also been spending time advancing my skills at making embellishments with my Slice. It's fun! I've got cards for sale in a mariners trading store in Port Charlotte. I began with 10 nautical cards to see how they do. I've talked to a little beach boutique shop who is interested in taking a look at placing them in their touristy store, but I've been lazy and haven't delivered them yet. And I have another potential location that I'm also looking in to.
We went to Venice beach to snorkel and collect seashells over the weekend. It was chilly, as a storm was rolling by. Once I was finally able to get in the water I was fine, as long as I kept swimming. Unfortunately, we weren't finding many shells this time. Jimi was able to observe several larger crabs in their shells moving along the bottom of the ocean. When we  got out of the water and dried off, the sun came out and we sat for a long time soaking it up. It felt so good on our bare skin.
That concludes the past week. All is well here in Florida. The weather is getting cooler - 60's by night and low 80s by day. And we haven't had much rain in the past week.
Love everybody,
Lorie & Jimi
Posted by Jim N at 11:21 AM No comments:

We've done nothing of great excitement in the past two weeks. At least nothing to top our last update (moving Sanibel). Jimi has worked hard everyday on the boat. On most days he gets up in the mornings, drinks his coffee and grabs a bite to eat. He packs a lunch and heads over to the boat yard. I do the same except I head over to me desk.LOL Sometimes he has projects to work on at home and spends the majority of his time in the garage. For this update I will briefly tell you what he's been working on.


Besides cleaning out the inside of the boat from our trip, the first thing he did was remove the outboard motor bracket. That made quite a difference in her look. She looks a little more like a respectable sailboat and not so ghetto. He also constructed a cover or awning over the cockpit to provide shade and keep the rain out. He says it has made a nice difference.


He designed about built 32 mast steps by hand. He purchased bar stock aluminum, made a jig and bent each step himself. Doing it this way cost us $3 per step verses buying them already made for $20 per step. He installed about half of them until he dropped his Makita from 30 foot up. However, a little attention and JB Weld and it's working good as new again. 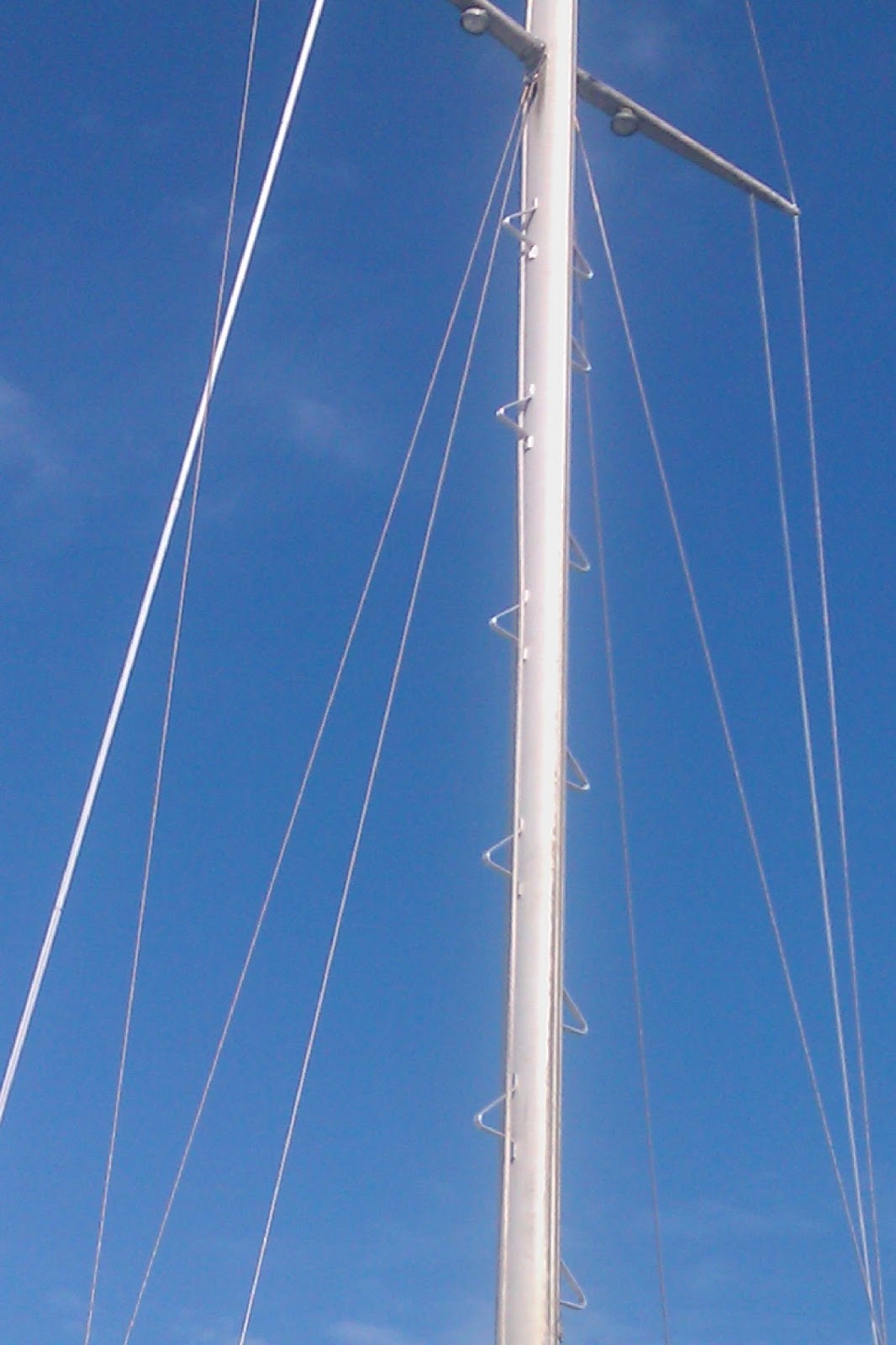 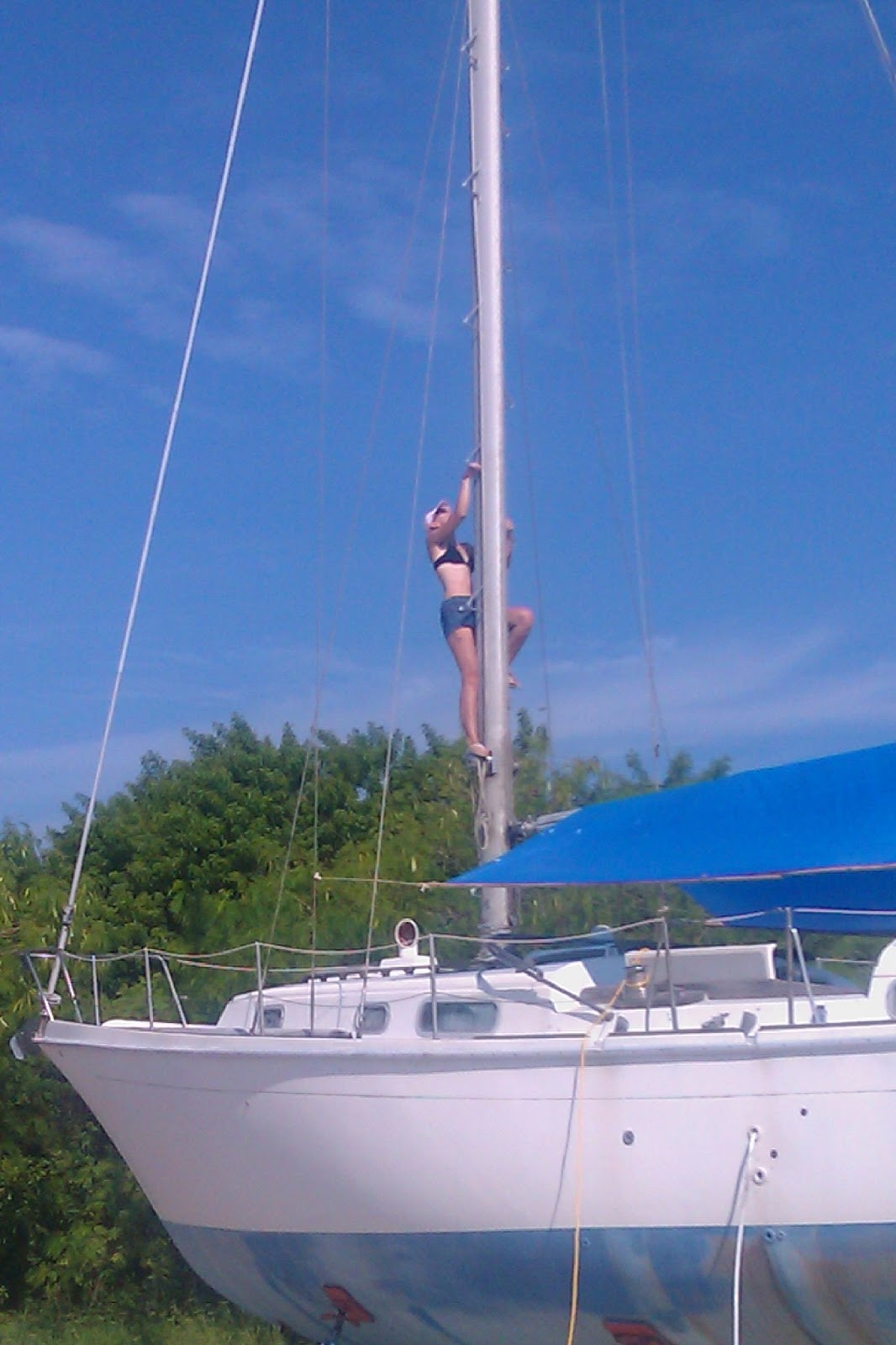 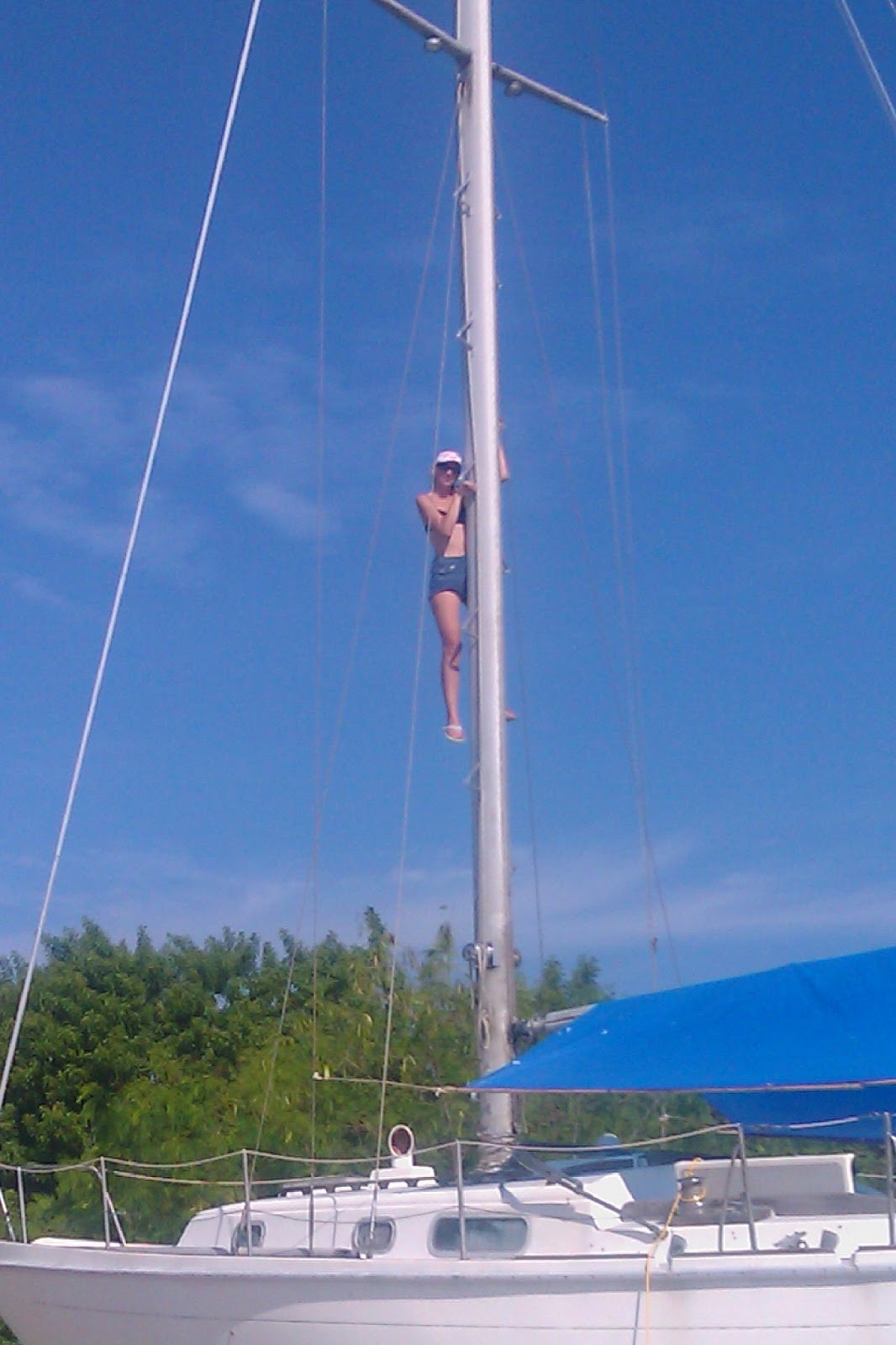 The big focus was the engine. Six years of water dripping and mild steel rotting, he removed everything from the engine he could to better access the damage. He ordered fuel injectors, a starter, rebuilt the transmission and put everything back together. He brought it back to life for the first time in six years. It runs and looks like it will survive, but it's not quite purring, so he'll continue working it. In addition, it needs to be wired in, a cooling system added, and a fuel system built because it was not the original engine to the boat.


He found and rebuilt a windlass (motor to pull the anchor up) off Ebay.


He scrubbed the top side of Sanibel to be able to access any damage. I helped him scrub her bottom side over the weekend. Now all Ghetto is gone and she looks like a whole different boat. We're like prouder parents everyday.


He completely removed the helm (steering wheel and pedestal). He rebuilt it in the garage and spent several days painting it in the lanai. It's looking really good.


Numerous trips to Home Depot and ACE Hardware. In most cases ordering parts on line has proven to be cheaper and he does that too. UPS comes to our house almost daily.


We found a great mariners trading store. They sell used items and most of the time the prices are really good. They have all kinds of little parts we would never dream of being able to find. They also sell a lot of books and nautical items that are fun to browse.


This email does not do justice for the work Jimi has done for the past two weeks. Reading it, it appears he hasn't done much, but he has and he's been so busy and working so hard everyday.


We did make it to the beach on Sunday. The wind came from the North and was cooler than we are used to. I stayed out of the water for that reason, but enjoyed my time reading. The waves brought us piles and piles of new shells and Jimi collected a few dozen shark teeth in less than a few hours.


We also made our way to the jewelry store and bought our wedding bands one evening.


Jimi says he'll give updates periodically and he promises to even put in a guest writing. That's all for now.