The past two weeks has been a whirl wind for me and WAU (work as usual) for Jimi.


Jimi is excited to report that all the soft spots and holes on the deck are fixed and filled. He has begun working to apply the gel coat and has also sanded the top half the entire hull. This is exciting and finally, after months of the 'same ole thing', a sign of progress and accomplishment. This goes without saying "we still have a long way to go".


I, unexpectedly, spent the last two weeks in Texas. I tried to concentrate on my studies in the hotel while away, but as it turns out I spent  9 hours a day in the office and another 1-2 hours at business dinners with our CEO and Accountant from Finland. I was so exhausted by the time I returned home. Now I am busier than ever. I went from 0 to 90 in 30 seconds flat. Haha. Seriously, my work load had increased dramatically and I am barely able to find time to do my school work. I am hoping it is temporary though.


Jimi and I went out for a few drinks to celebrate St. Patty's Day. It was nice and after a few drinks, Jimi even admitted being around all those tourists wasn't so bad after all. We spent a couple of hours at the beach on Sunday taking sightings with the sextant. We first ended up in St Louis, second try we were in Colorado and the third try we were in Washington DC. It sounds to me like we've got our longitude correct, now if we can move south to find the right latitude, we'll be good. 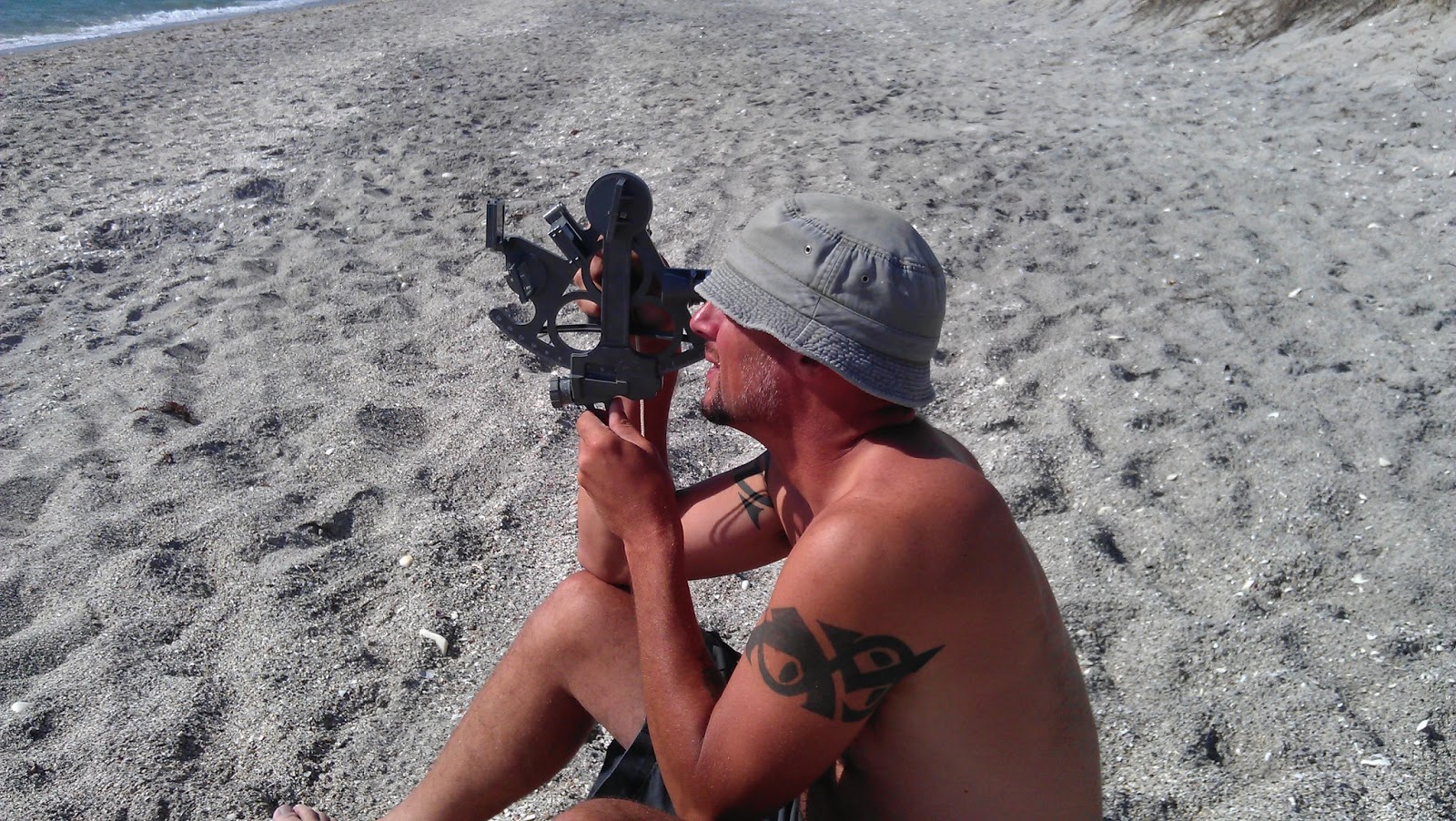 Jimi had planned on taking a swim in the ocean, but forgot his swim trunks. Haha - that didn't stop him. When no one was looking, we dropped his drawers and ran into the ocean in his underoos. Of course then he had to wait until gain no one was looking to get out. It was funny.

Dear Friends & Family,
Not a lot has changed since I wrote two weeks ago. Jimi is still working on the deck, however, he is making progress. He completed the repair to the internal support arch under the mizzen mast and reset the mast, actually called stepping the mast. He now continues with the port holes and other miscellaneous deck work. Jimi ordered and we received our main chart plotter for navigation, which will also handle important instrumentation, most importantly depth and boat speed in the water. He is sorting out the navigation charts we need to get them on the unit.
School is going well for me. I slowed down the last two weeks, but am hoping to pick things back up again.
Last weekend I drove to Orlando to visit my girlfriend Melody. On Saturday, we unexpectedly drove to her brother, Rick's house in Jesup Georgia for the night. It was a real honor to spend the weekend with her and her family. They laid her brother, Darold to rest on Friday, March 2nd. Darold was loved and will be missed. I wish him a peaceful rest and serenity to the family.
His obituary:http://www.newcomerorlando.com/obituary.asp?src=value&obitid=55393&name=Darold+William+Chrysler&city=Orlando&st=FL
Jimi and I went to Sarasota this past weekend to buy more teak (that stuff is expensive) and pick up some boat parts at the marine surplus store and then spent some time at the Siesta Key Beach. It was nice to get out. The weather on Saturday was absolutely beautiful; however, on Sunday it was cold and windy. We took the car to the car wash to clean it up. Jimi will list it on Craig's list.
That's all we have for this update. More later.
Love Everybody,
Lorie & Jimi
Posted by Jim N at 7:36 AM No comments: