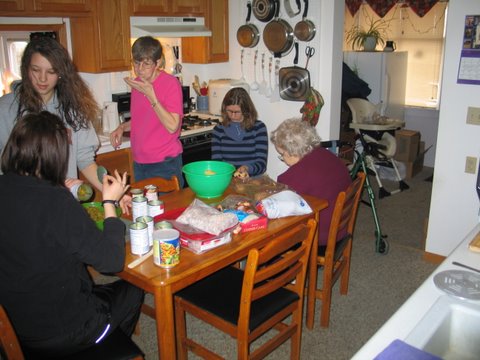 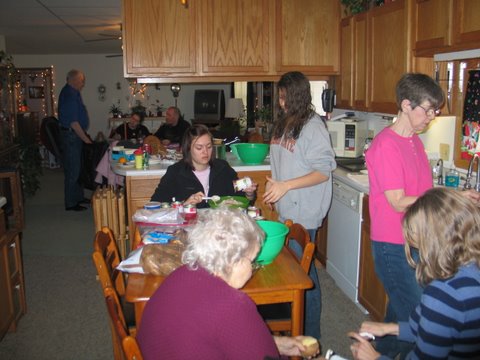 It seems that every year the week of Christmas comes and goes as fast as we blink. And this year was no exception. Jennifer spent Monday, Tuesday, and Wednesday in Loveland with her friends, while Jimi and I worked to finalize our plans for Christmas. I baked (or tried to bake) Pecan Tassies. They were tasty, but looked nothing like they were suppose to. However, I took them to Nebraska anyhow. I also baked red velvet woopie cookies with peppermint filling - OMG they were soooo good. And I baked a red velvet cake for my mother's birthday.

We left Thursday morning for Nebraska had and a fabulous Christmas. Daniel was the only family member not present for Christmas. I know hind site is 20/20, and kicking myself for not flying him out won't do me any good, but I'm kicking myself anyhow. I so wish I had just done it. I love my family and am so blessed. I was especially happy to have Jennifer home.

I presented my sister with a family tree album of our father's tree, our mother's tree and her biological father's tree going back to the 1600s. Mom and dad also got their own copies. And a took all of my father's military certificates, records, medals, pictures, and documentation organizing them in an Air Force emblem album. It turned out to be a huge book and barely closes, but its pretty awesome.

Christmas was about family this year. Jimi and I are grateful for the time we shared over the holidays. 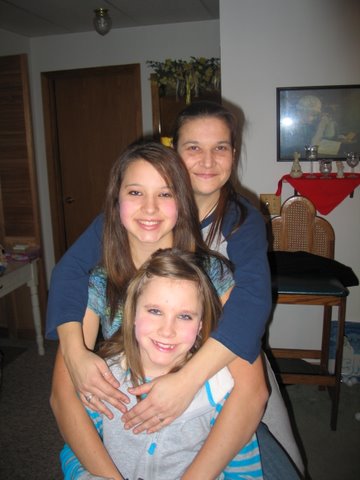 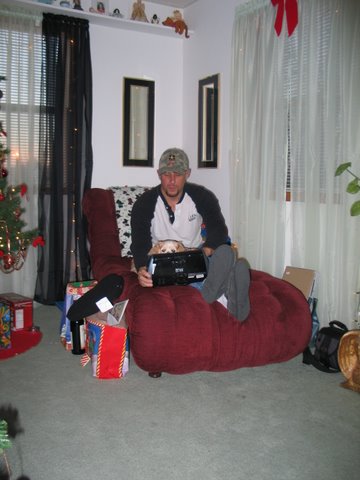 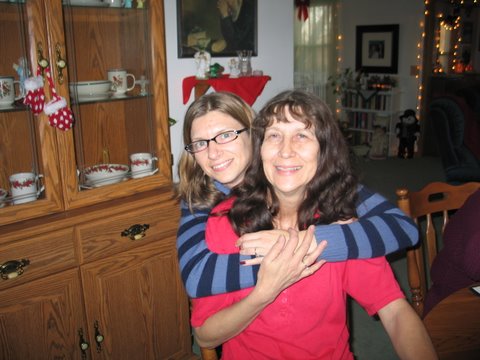 
We had a fabulously busy week. Jimi painted all the ceiling fans on the main level of the house to give them a more modern look and a less 70's look. It really helped. He also painted the kitchen cupboards, repaired a few wall cracks in the plaster painting over those, and did some other painting projects


Jimi and Matt had a awesome day on Tuesday snow shoeing in the mountains. Jimi was also able to get a few back country snowboarding runs in. 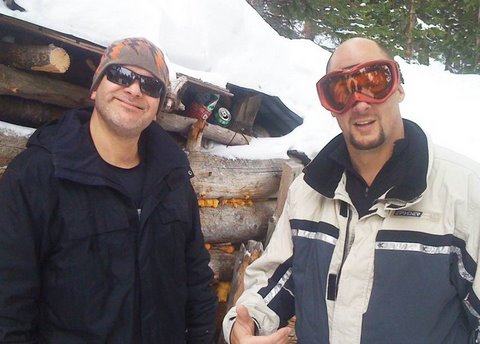 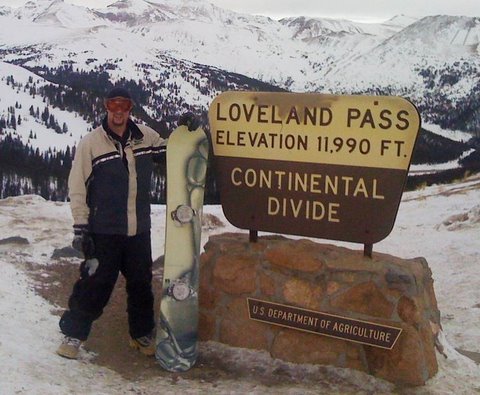 Rest of our evenings during the week consisted of preparing for Jenn's visit, Christmas, and relaxing with movies. A couple of movies we watched were Toy Story and Cole Minors Daughter.


On Friday, we waited at the airport for 45 minutes or so watching for Jenn in her camo and finally we saw her coming up the escalator. I think I embarrassed her a little. When I saw her, I began jumping up and down (slightly) and hollered "there she is". Jimi immediately began snapping pictures like the paparazzi. I waved my hands in the air screaming her name with uncontrollable excitement and motioned for her to come to us, but she smiled, lowered her head, and went the other way. Ha-ha. Jimi and I ran over to her and gave her the biggest hugs. She looked great! We got some grub at Chipotle and then went home to visit. Jenn was asleep before 8pm and then awake at 5:30am the next morning. 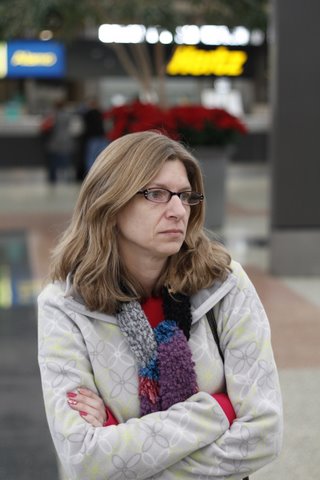 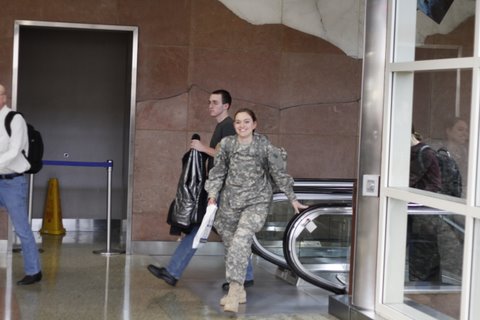 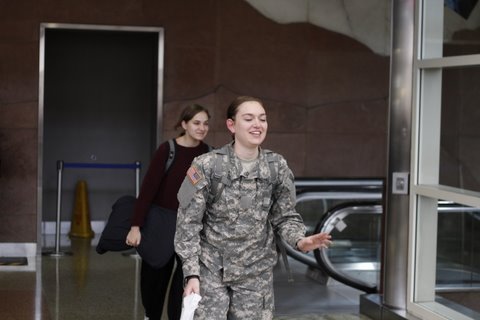 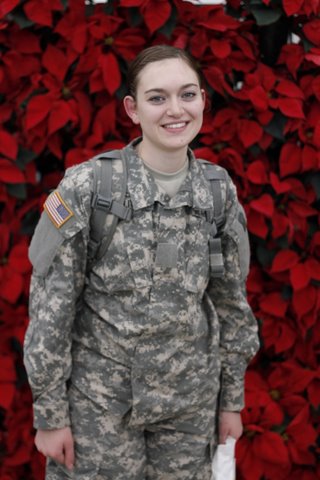 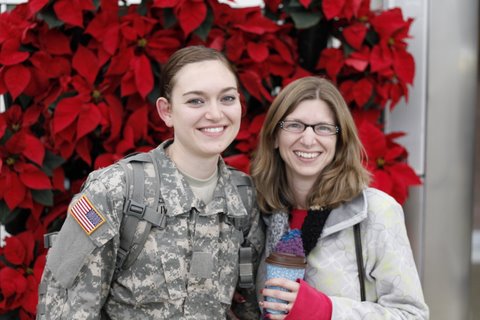 I made breakfast for all on Saturday morning before Jenn and I headed our for an all day mother daughter adventure. We went to the nail salon, did a bunch of window shopping, saw the movie "How Do You Know" and then got goods for baking at the grocery store. She was again in bed early and early to rise on Sunday.


I baked Puppy Chow and Peanut Butter Kiss cookies in the morning. That afternoon, as I was working on a homemade Christmas gift when I sliced a big chunk from my left index finger. It took an an hour for it to quit bleeding and even when we unwrapped it to clean in this morning, it began bleeding again. Jimi quickly wrapped it back up again. It will have to stay wrapped until it seals itself. I probably need a stitch or two, but that isn't going to happen. It's quite difficult to do things without using that finger - Ugh - but I'm managing. 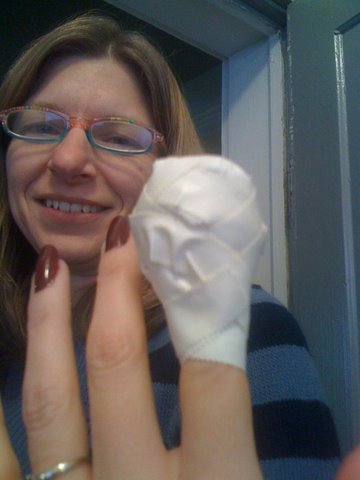 Anyhow, that's it for now. We are finalizing things for Christmas and our trip to Nebraska this week.


HAPPY HOLIDAYS TO YOU AND YOUR FAMILY!

After coming home, I was excited for a quite leisurely week; however, it turned in to a bit more.

Monday evening we did stay home and watched Ghost Busters. Jimi ran the dish washer, but the hose came undone and water was everywhere on the kitchen floor. It was also running into the basement through the light socket. So, Jimi turned off the electricity in the basement until things could drain and dry out. Unrealizing to us, he also shut off the pump to the furnace. We woke up to a 55 degree house - it was cold, but only about 12 degrees less than what we are used to. We didn't notice it when we were snuggled in bed.

Wednesday night we played pool with Vicki and Jason. It was fun. We also got to play with Jason's Cockatoo. This bird is larger than our cat and quite smart. The bird gave Jimi a kiss on the lip, ha-ha; it kind of freaked him out a little. It was fun.

Thursday night was Cencorp's annual Christmas Dinner. We ate at the Boulder Cork. It was a lovely evening and we had a really nice dinner.

Between Friday and Saturday, we finished up our Christmas shopping; although, I am still working on some crafty things.

And Sunday we went for a long brisk walk, I picked up pictures from Tammy and Greg's wedding, and then we relaxed with a large crock pot of homemade chicken noodle soup. Yummy!

That's all for now. Happy Holidays!

There was nothing special about my week in McAllen. I went to the movie theater while there to watch the new Harry Potter movie; it was very good. I also cut all my hair off. O.k., well maybe not 'all' of it, but it feels like it; I cut off about seven inches. The people who know about it, keep bugging me for a picture; however, I am in hiding until it relaxes or grows out a bit. I really wonder what the heck I was thinking. Lol. My flight home left at 6:20am, which meant getting up at 4:30am. Jimi picked me up from the airport at 9:50am. I was so tired that I took a very long nap Sunday afternoon.

Jimi began working at the annual Croc's warehouse sale; however, on Thursday they told him he needed to stand on the side of the road wearing a sign advertising the sale. He politely told them he could not do that, so they told him he would have to leave. I've heard from other Croc's employees that the temporary agency in charge are not pleasant to work with this year, unlike last year. Too bad for them, because Jimi was an asset to the sale. When he left he had a few name tags in his pocket; you know the stick ons that read "Hello I'm". Jimi walks around the house repeating "Hello I'm Johnny Cash", so I told him to put his name tag on and walk around in public - ha ha - including shopping at the Croc's sale. Toooo funny. Yes, we are cheaply and easily amused. Lol

Jimi did get a free pair of Crocs for the days he worked and he bought a back up pair too. I am hoping to get over there next weekend. Jimi met up with friends Jana and Juraj Saturday night in Boulder for a few drinks. We had a couple of showings on the house over the past two weeks, but still we wait for a buyer. Our cat Molly must have gotten in to a scrap because she has some wounds on top of her head. We are treating them hoping she will heal quickly.

Upon arriving home and going through our mail, we had about seven letters from Jennifer. We are very proud of her. She says it is hard, but she is doing well. She likes her drill sergeants, and has made a few friends, Her nick name is 'Sully', just like her father. We imagine this nick name will follow her through her entire career now. She made her travel arrangements for VBL (Victory Block Leave or Christmas break). She arrives at DIA on Dec 17th at 1:40pm. We are excited to pick her up and will be waiting with a large poster board sign and camera.

As always, I am glad to be home with Jimi.