We’ve been at Marco Island for nearly a month now. We had no intention of staying here that long, but when we find a good thing, we may as well go with it.

This little bay is tucked away, free from wakes and swells and we are close to shore with a free dinghy dock at the grocery store. Laundry is close by and we’ve managed to find a few things to do for entertainment. Thursday nights, CJ's on the Bay has live music. The downside is it’s the exact same songs in the same order every week. We've only gone once, but can hear the music on Sanibel. 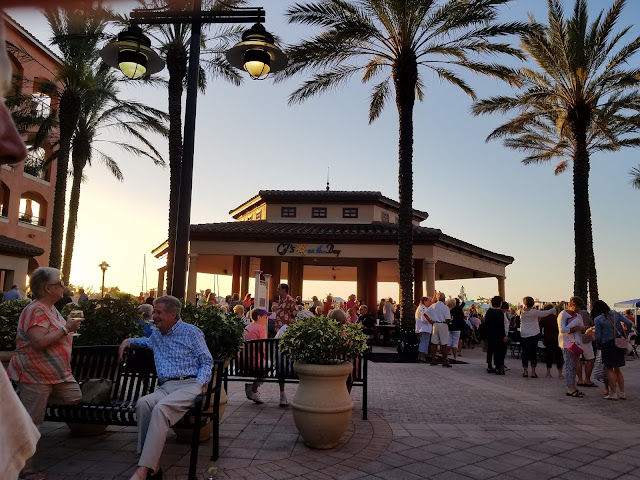 It looks crowded and it may be over by the bar and musician. We sat back a bit, on the edge of the fountain. It was nice. 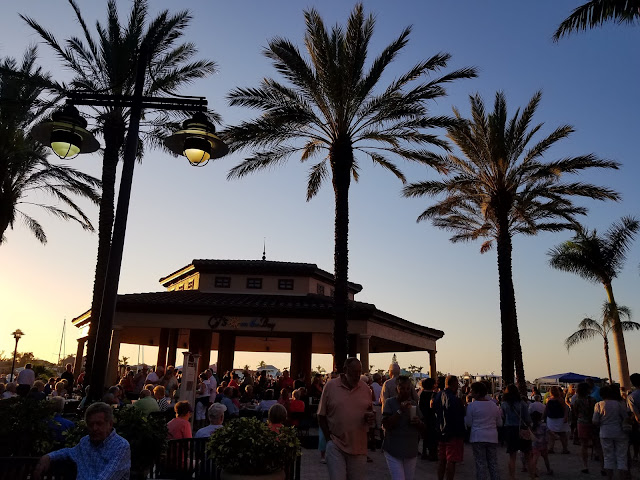 There’s a great farmer’s market on Wednesday morning and we’ve found our favorite coffee shop in the area named ‘Wake Up Marco’. It’s quiet and quaint. There has been an Antique Road Show (but we didn’t go), a Strawberry Festival (but we didn’t go) and an Art show. We’ve splurged on Cold Stone Ice Creamery twice – yummy! And we’ve gone for a lot of walks to the park and Bealls Outlet (my favorite store right now). 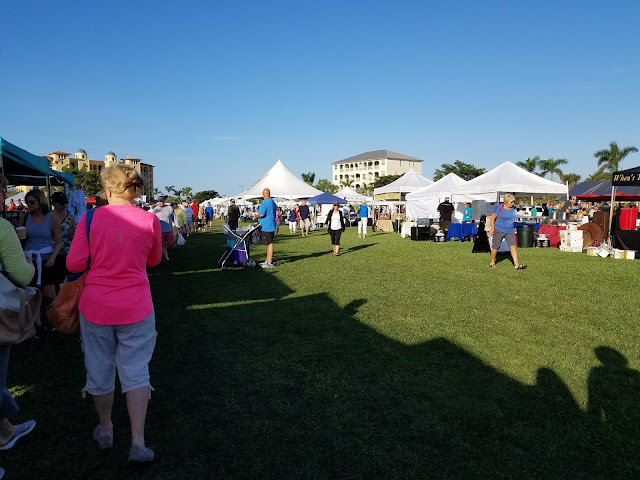 The market is massive. 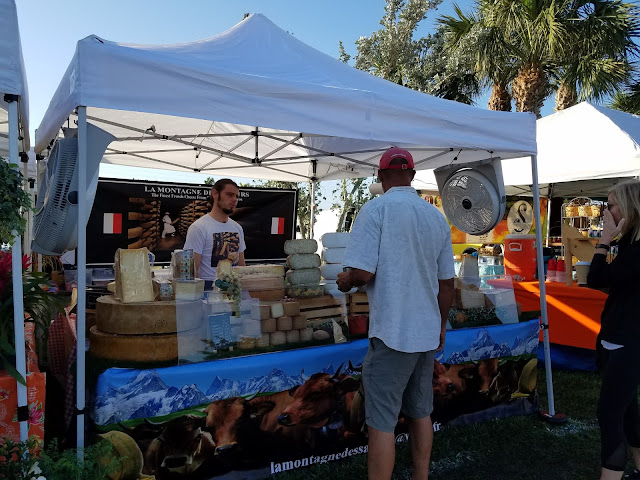 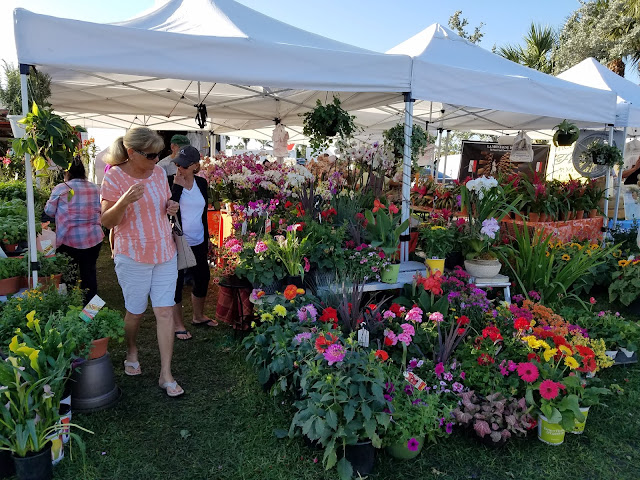 The flowers are beautiful. There are probably five or more floral vendors. 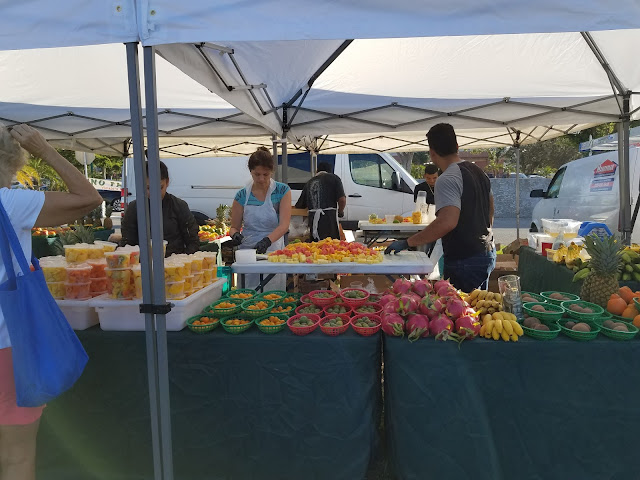 Dozens of fresh fruit and vegetable vendors all at good prices. 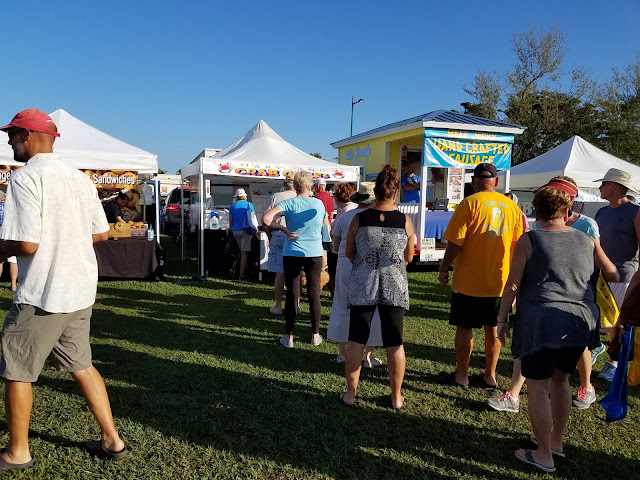 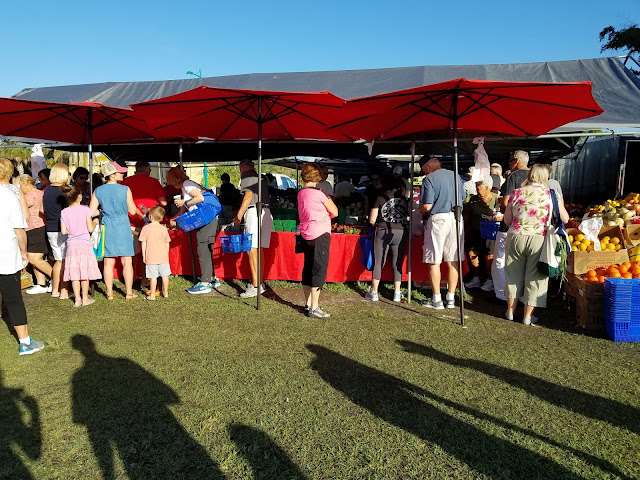 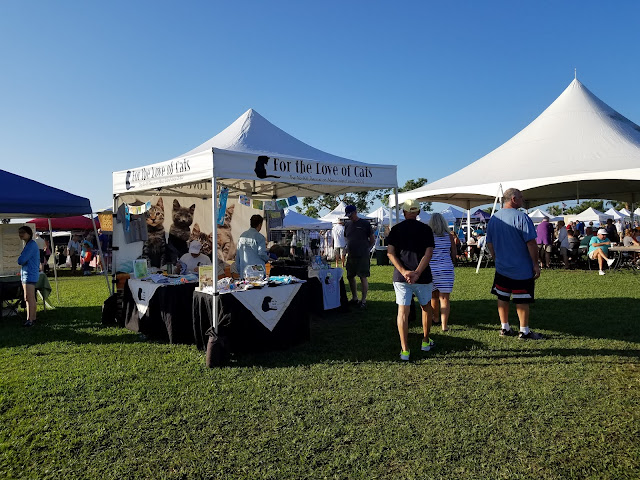 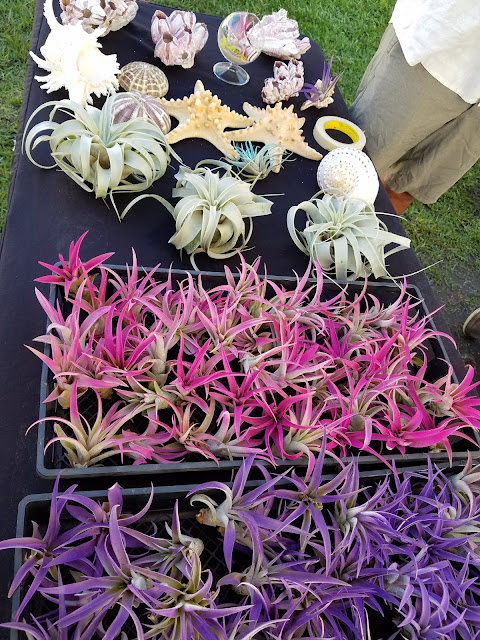 Jimi and I fell in love with the plants and of course, I bought a couple. 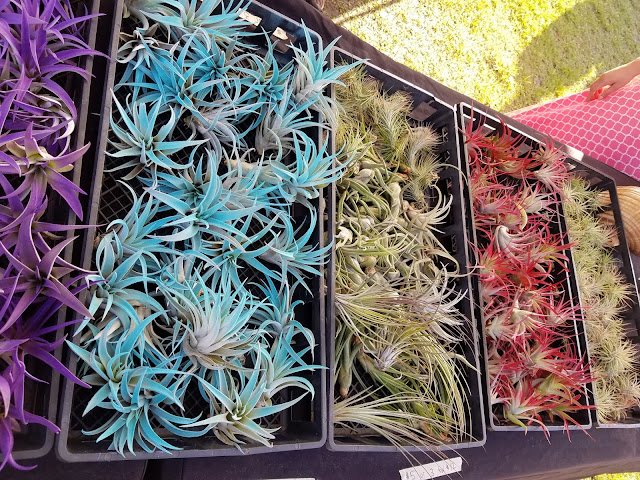 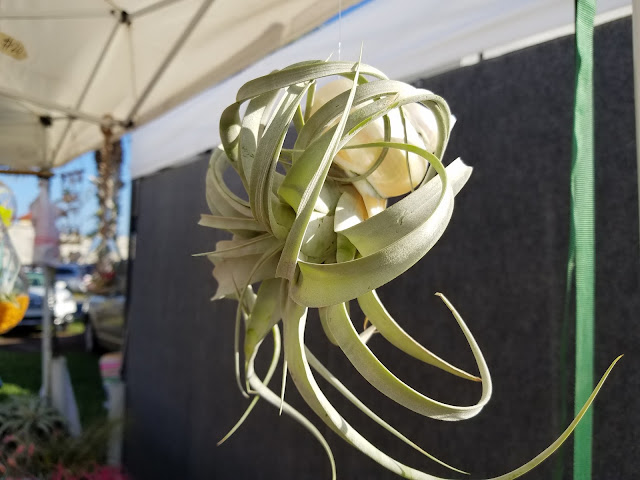 This is the one Jimi wants, but he hasn't purchased it. 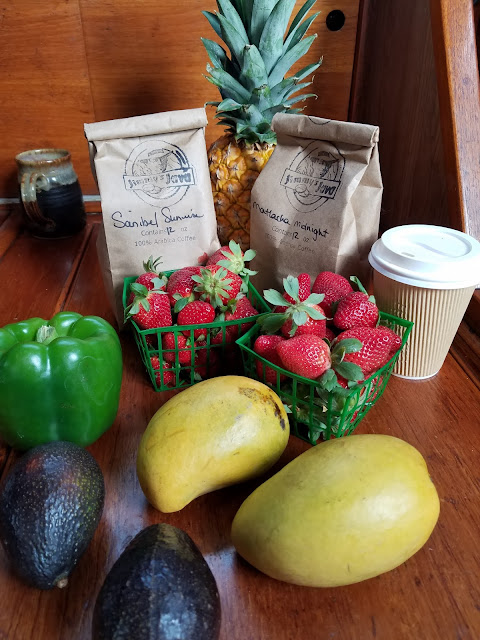 Our score the second time we went. 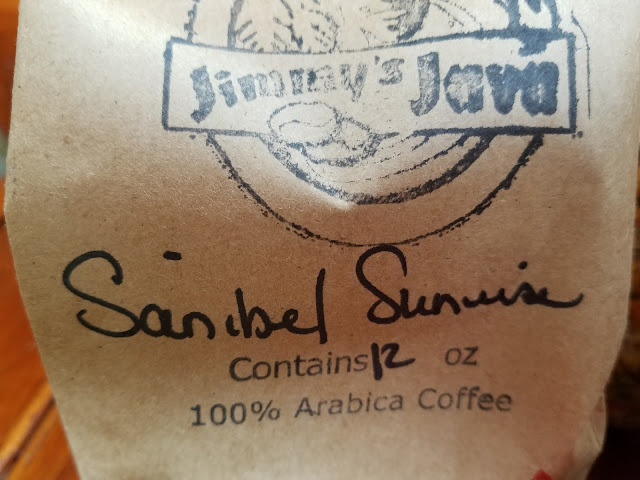 And look at the name of this coffee - fitting.

We, however, are on the low end of the totem pole. This is a very rich area and we are a bit out of our league. We are surrounded by privately owned vacation condominiums, big yachts and power boats. We haven’t met any other cruisers here. We’ve seen some and talked briefly in passing, but it seems people typically stop through here for a night or two rather than staying like we have. 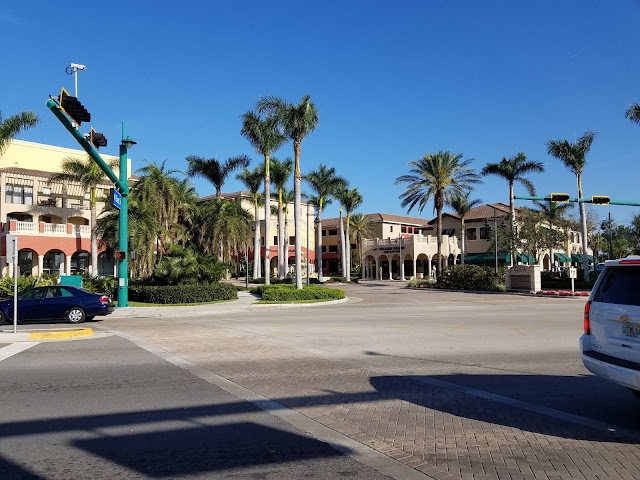 This is the entrance to the Esplanade. It's full of shops and restaurants.  The second floor and up are the condos. The Bay to this is where Sanibel is anchored. 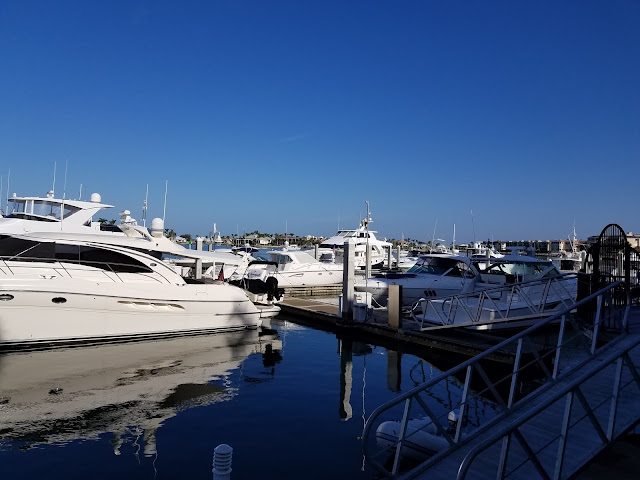 See our tiny dinghy compared to the large yacht? 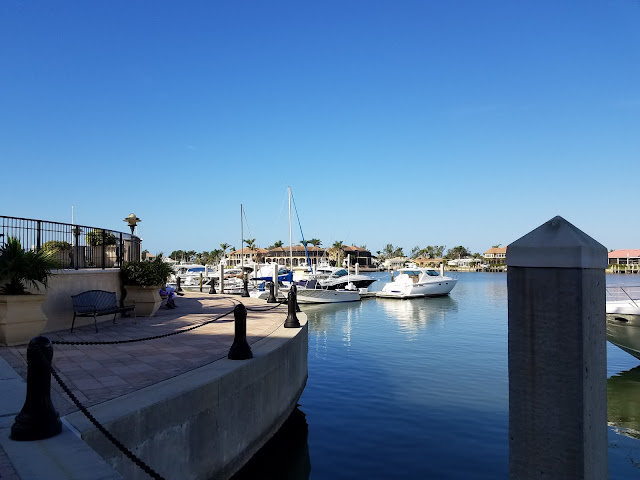 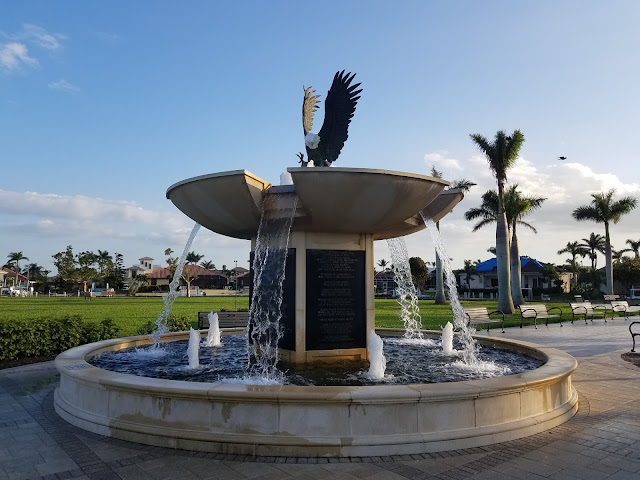 Eagle, fountain and Vet Memorial at the park. 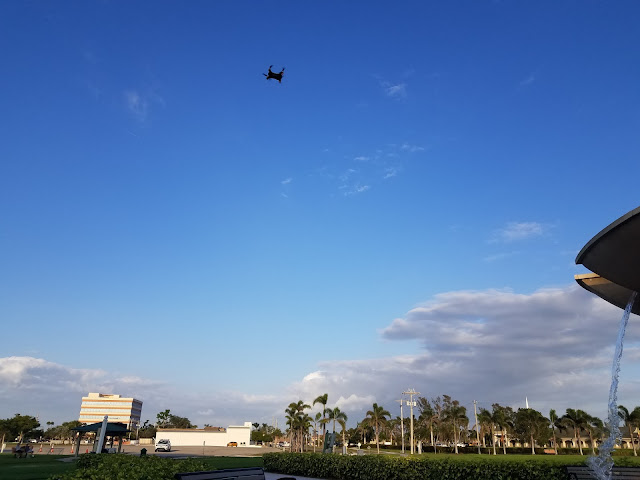 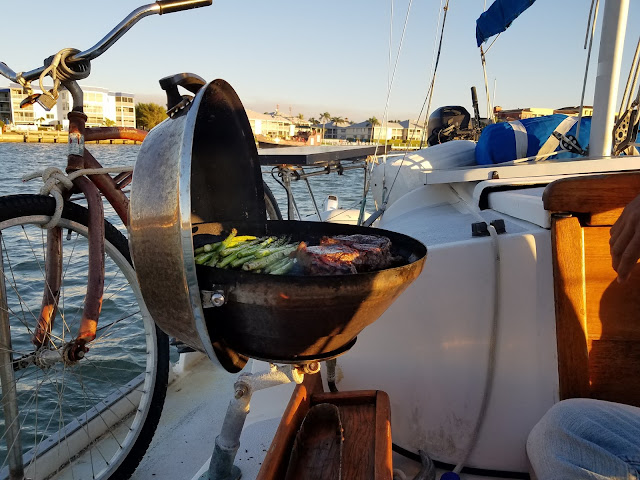 Supper on the grill. 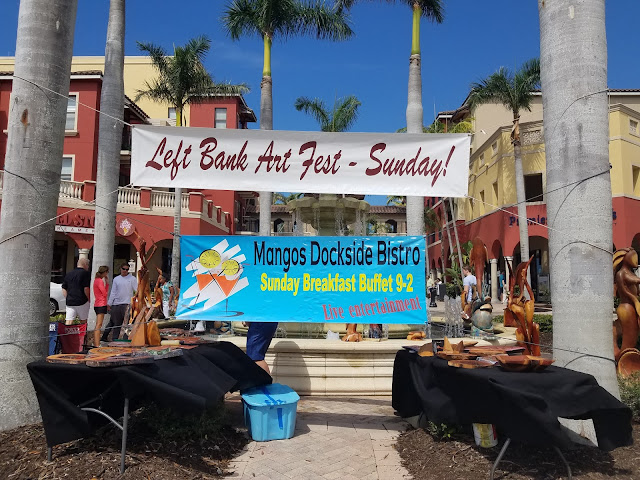 This is the Art festival at the Esplanade. 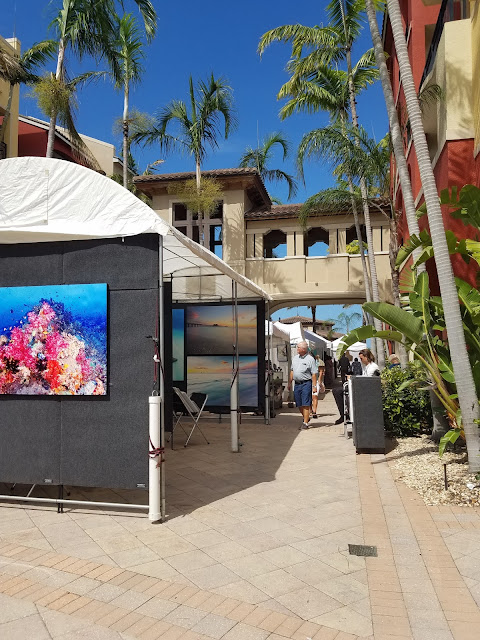 Yesterday, we got word that a fulltime live-aboard friend of ours was involved in a boating accident. His body is missing and he’s presumed dead. His name is Farroh. We first met him five years ago in 2013 in Clarence Town of the Bahamas. At that time he was in his early sixties. He was born and raised in Iran. At the age of nineteen he came to the United States of America with his parents and started a new life. He went to college and became a Professor working at CU in Boulder, Colorado. And then he retired and began sailing the world by himself. We spent some time together and were practically inseparable. The last time we saw him, we were in Rum Cay. However, I kept in touch with him over the years via email. His son emailed me with the news and it breaks my heart to hear it. R.I.P Farroh, my friend. 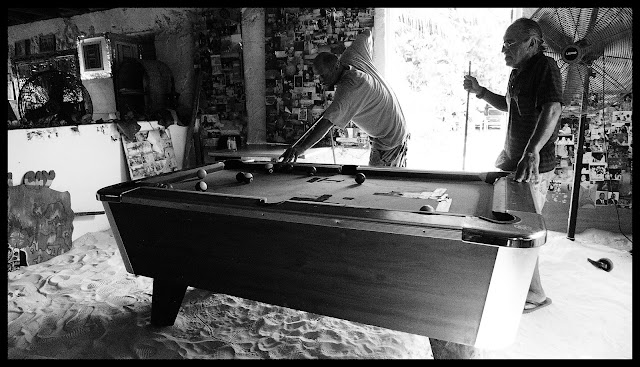 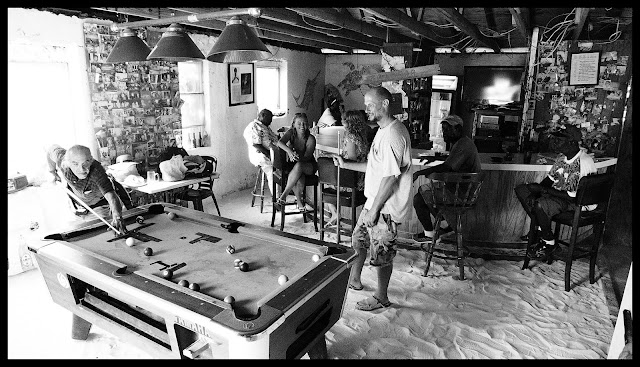 While we've been here, Jimi has worked on the VHF antenna. Our reception wasn't as good as it should have been. He discovered that the cables had some water intrusion and needed to be replaced. In an attempt to replace the cable that runs down the mast, he discovered that our mast is filled with packing peanuts. This is common to ket the cable from rattling; however, he is not able to run a new cable down the mast now and has to come up with a new plan. 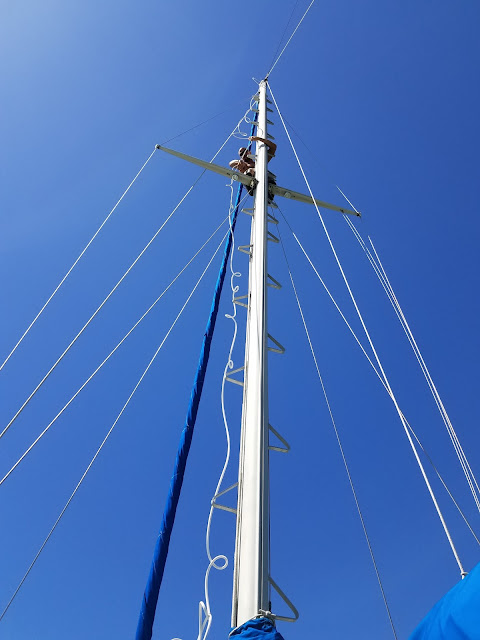 He also rebuilt the alternator. It quit after we left Marathon. He ordered the parts and got it all fixed up.

Every evening at 6-ish the Black Pearl comes by, loaded down with tourists singing the YMCA. The boat always stops at the apartment/condo where residents are waiting to sing with and cheer them on. 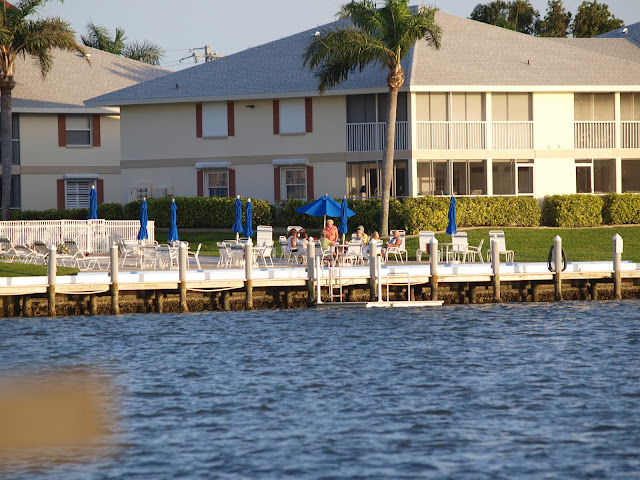 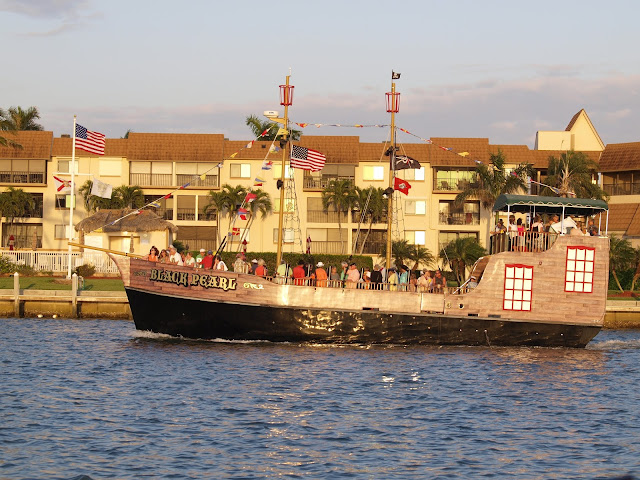 We’ll head on to Fort Meyers Beach as soon as we get a weather window.

Posted by Lorie Nicolaus at 8:10 AM No comments: