There's no place like home. In my case I have two homes and can always say "there's no place like home" and mean it. I arrived home last Saturday night around 9:30pm. Jimi put me to work right away on Sunday...lol, not really. We had to do a few things to prepare Sanibel for the hurricane. Since he used the actual anchors to tie her down and one of those anchors was anchored in the middle of the road, we tied a bright red gas can to it, so no one would drive over it. 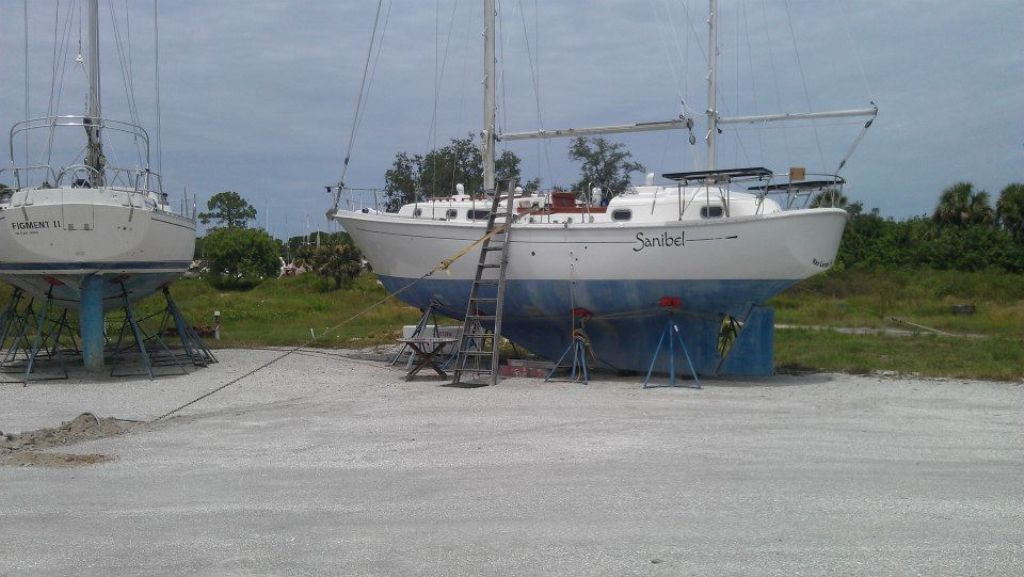 We also removed the solar panels and tied down any other lose items. Later that evening the hurricane turned away from us and headed West. It's always better to be safe than not, right?

I've stayed home these past few days working on home projects to do with the cockpit and saloon cushions. While I was out of town, Jimi ordered the fabric for the cockpit cushions and the other night we found fabric for the saloon cushions. Jimi ordered special thread which will be used on anything not inside the cabin. We are waiting for that to come in.

Jimi says the electrical is almost complete and he has a good handle on it. He's having trouble with the battery chargers. He's purchased two so far (we only need one), but none of them are working.He continues to troubleshoot trying to figure something out. He wired up the wind generator and the solar panels. Both are producing plenty of electricity for our needs, even on cloudy and calm days. The refrigerator is wired in and working as it should. All of these little things he gets done are exciting for us. To finally knock something 'complete' off our list, as simple as it may seem, is such an accomplishment. One thing at a time and one day at a time. 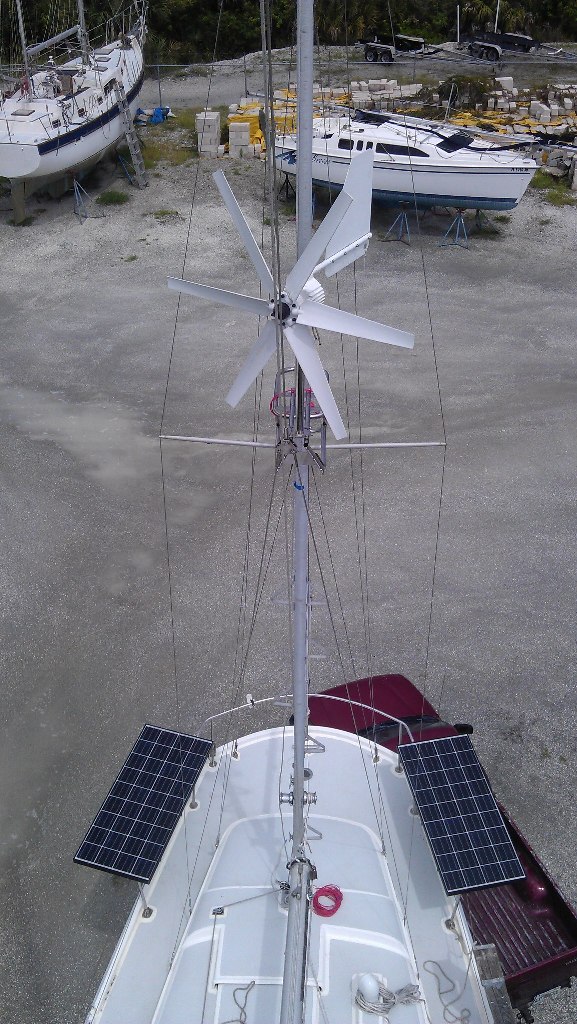 We have roughly 3 months to go. I'm sure I've said it before and I'll say it again "it's going to come and go quite fast". We've got to begin clearing the house out. We have things to sell on ebay, decide what we have room for to keep and haul off the rest. This will be a part of my home projects.

An alligator had made a home in a ditch just a few blocks from our house. We unsuccessfully tried to get a picture of him a couple of times. As soon as we drive or walk up, he scrams. Finally on the third attempt Jimi snapped this picture. 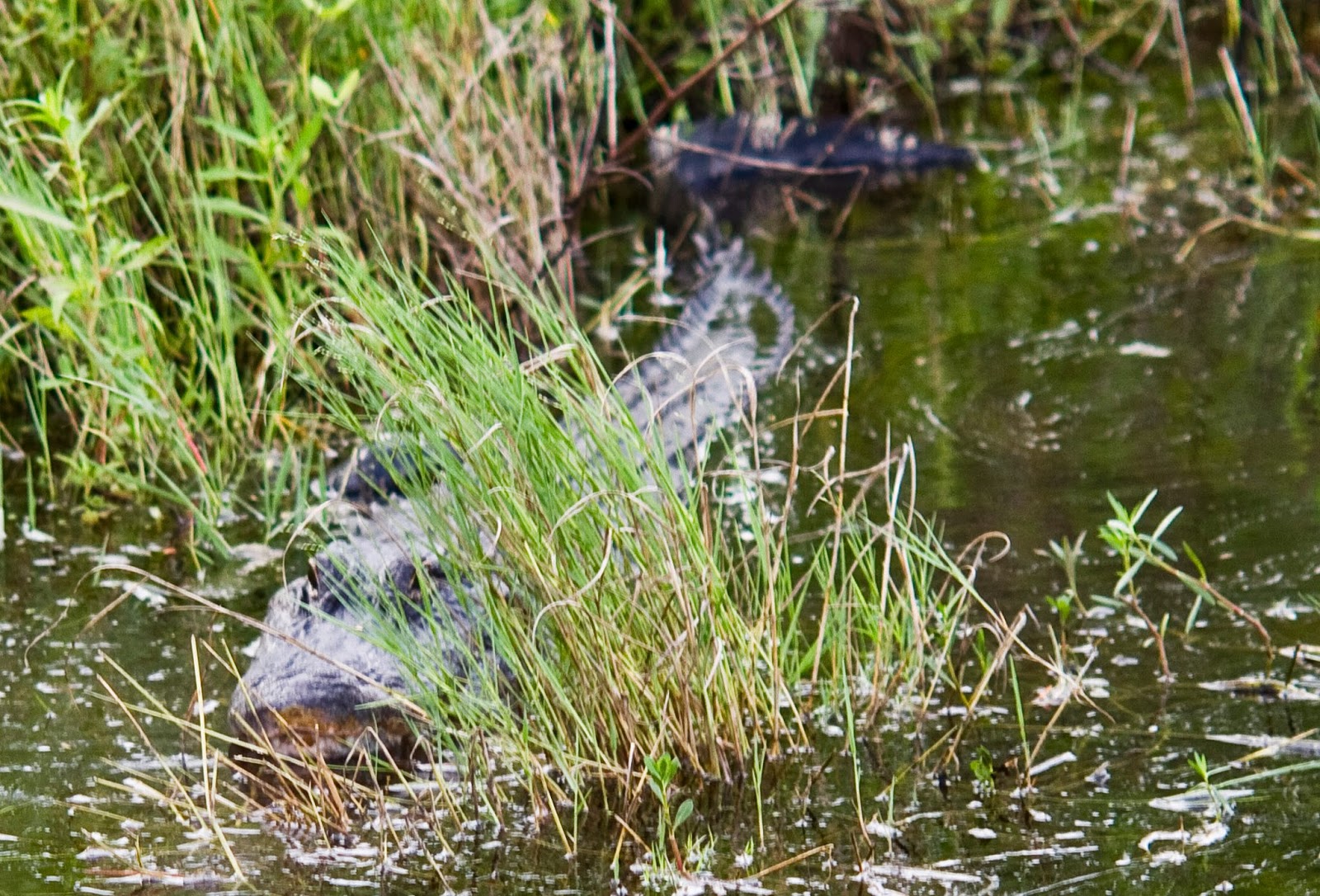 Here is a  picture of our new dingy. 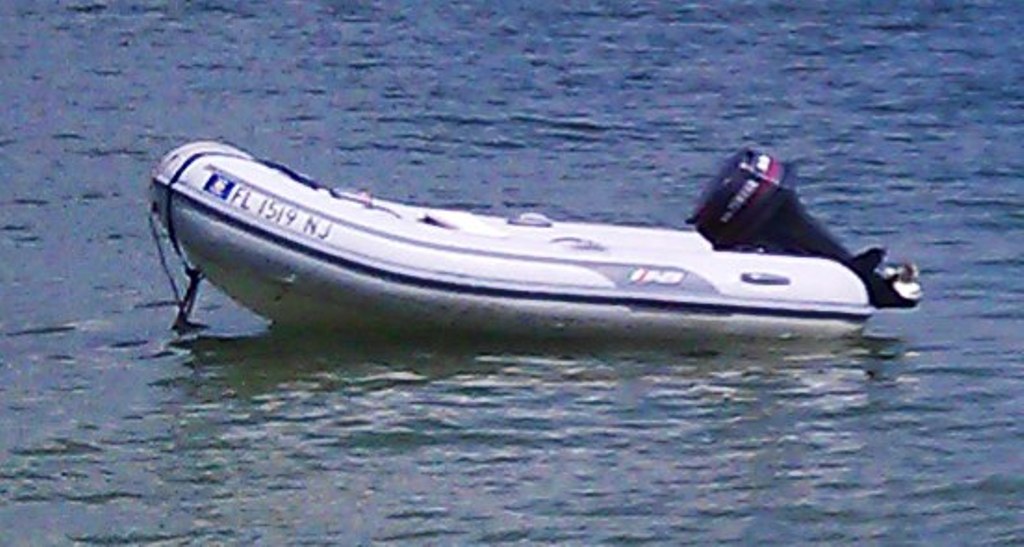 I know..I know, it's been nearly two months since I've written. And where are we, you ask? As I sit down to write this email I'm not really sure; it's been so long since I''ve written and I haven't been home, so to give you much detail is difficult. I do know we've been busy (uh mostly Jimi) and I just can't believe how quickly the time is going.

Jimi continues to work on the electrical. It's not completely done, but it's getting there. The mess of wires in the engine room is beginning to take shape and look organized. 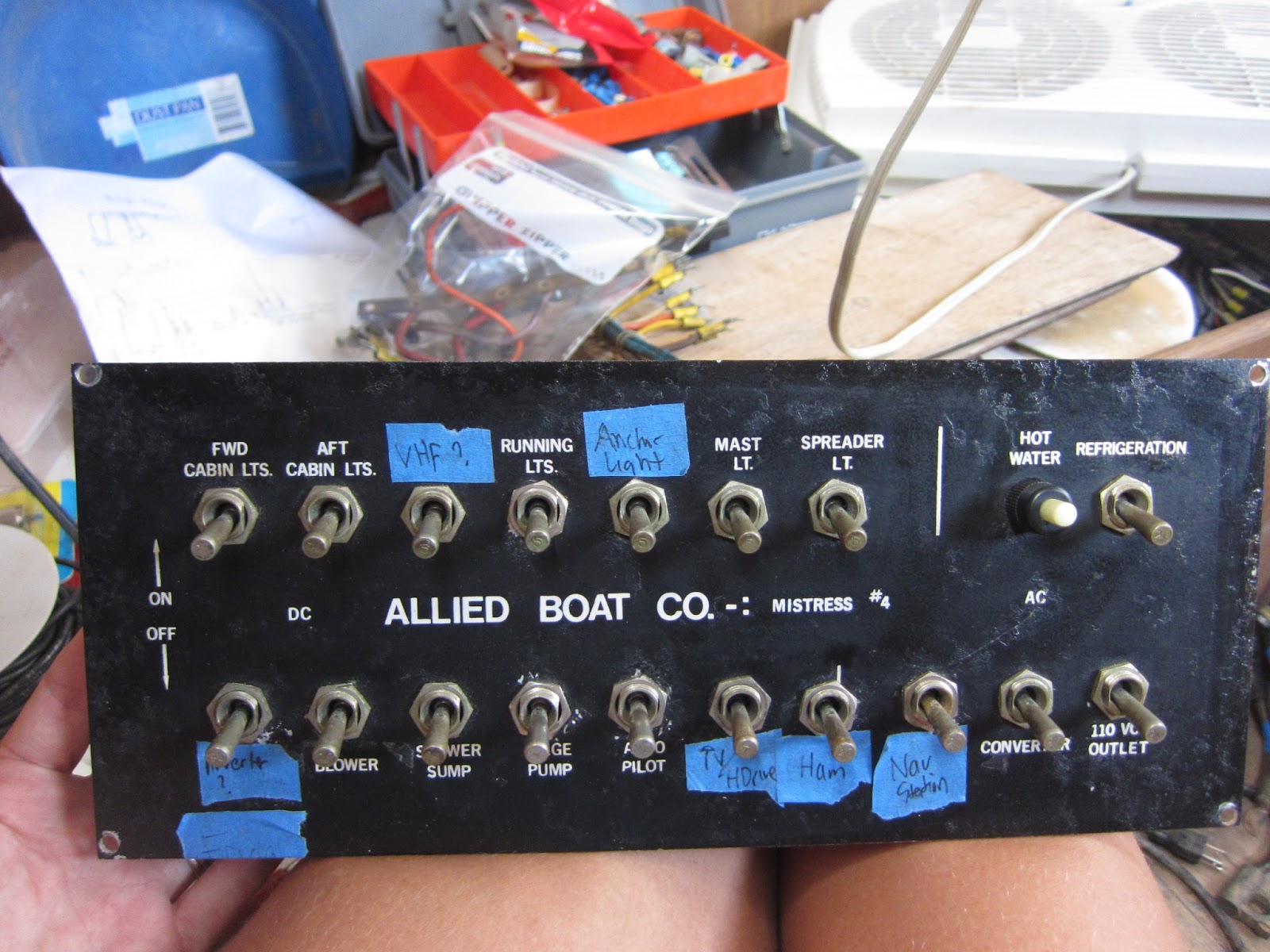 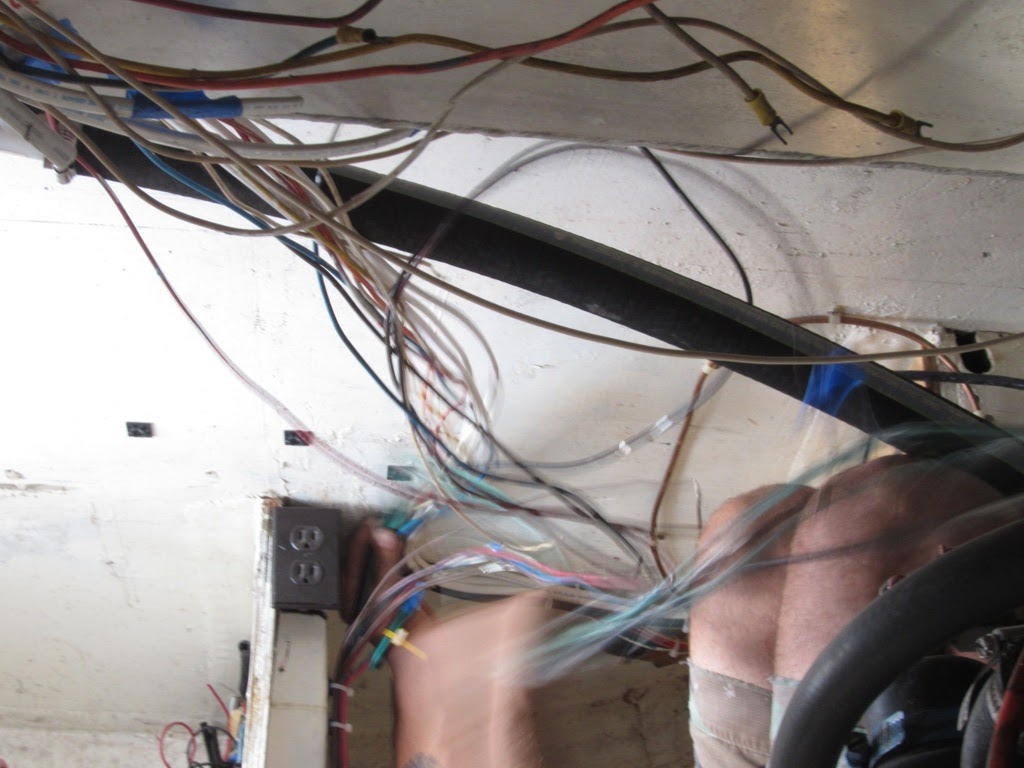 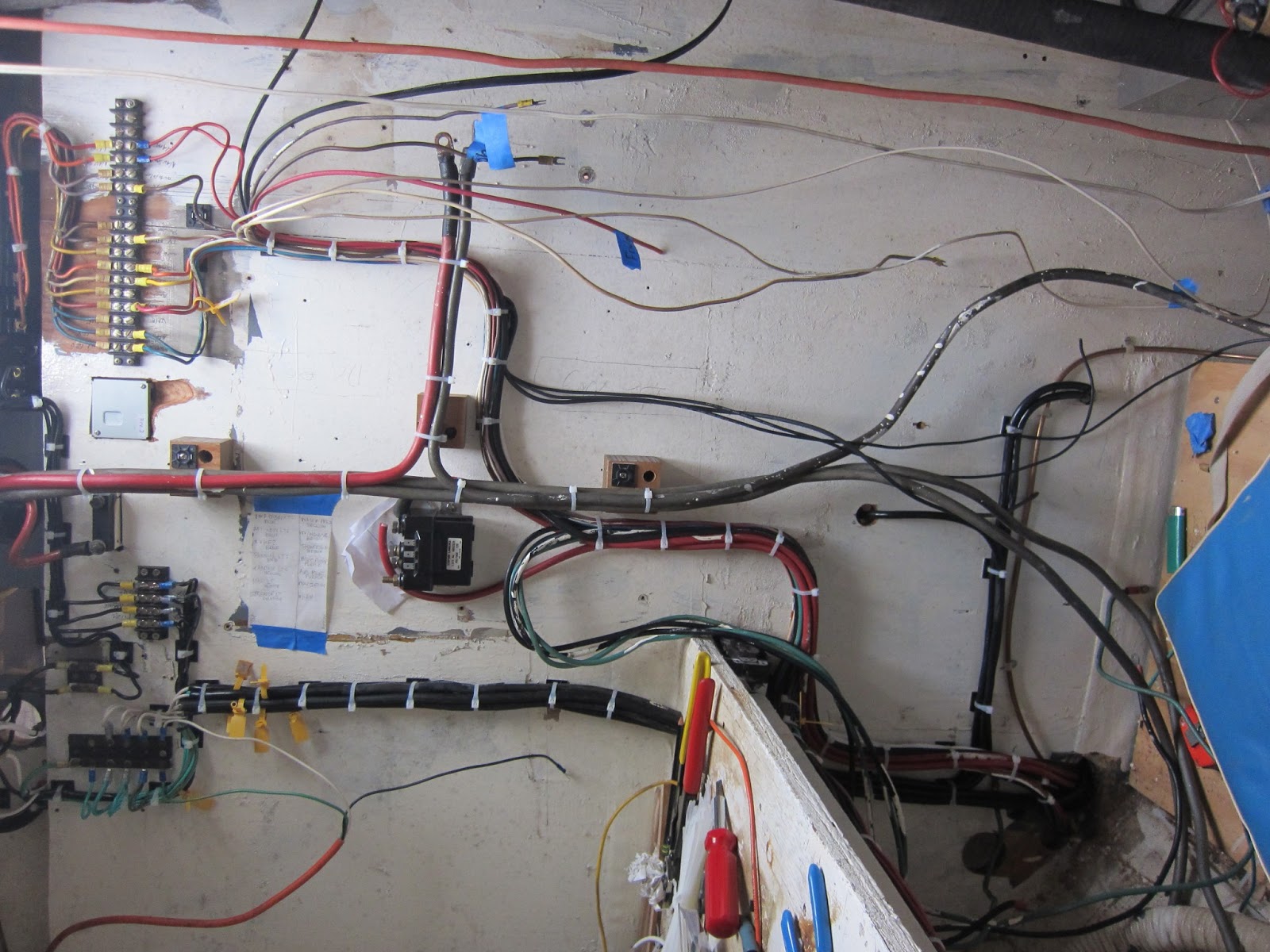 Jimi has hooked up the steering. He has begun poking through some of the plumbing. After testing the toilets, he discovered that one of them needed to be replaced, so he ordered a new one,


Jimi attached the wind vain to the mizzen mast. I'm not sure if it is hooked up yet. 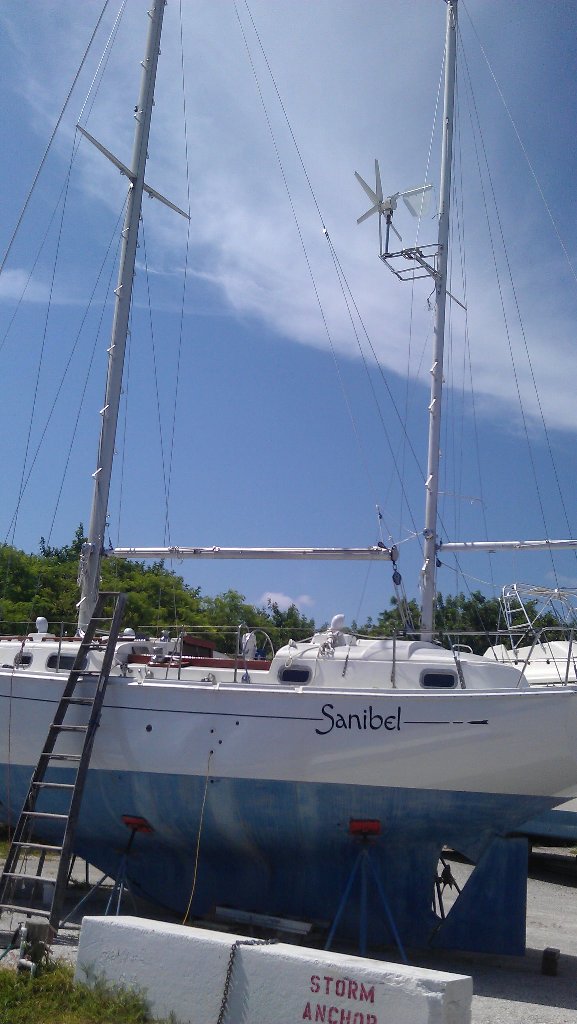 He also designed and built a small cockpit table. 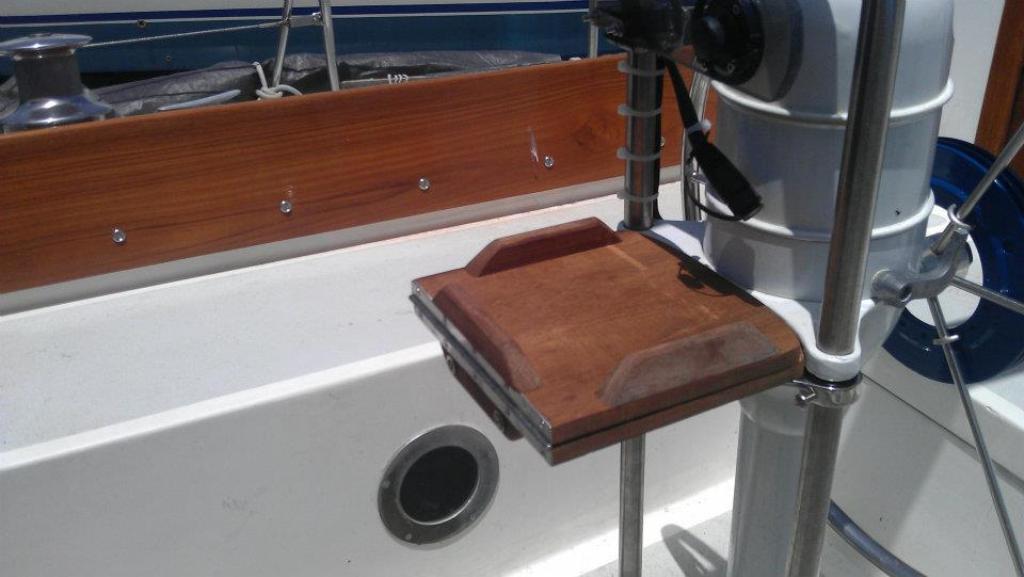 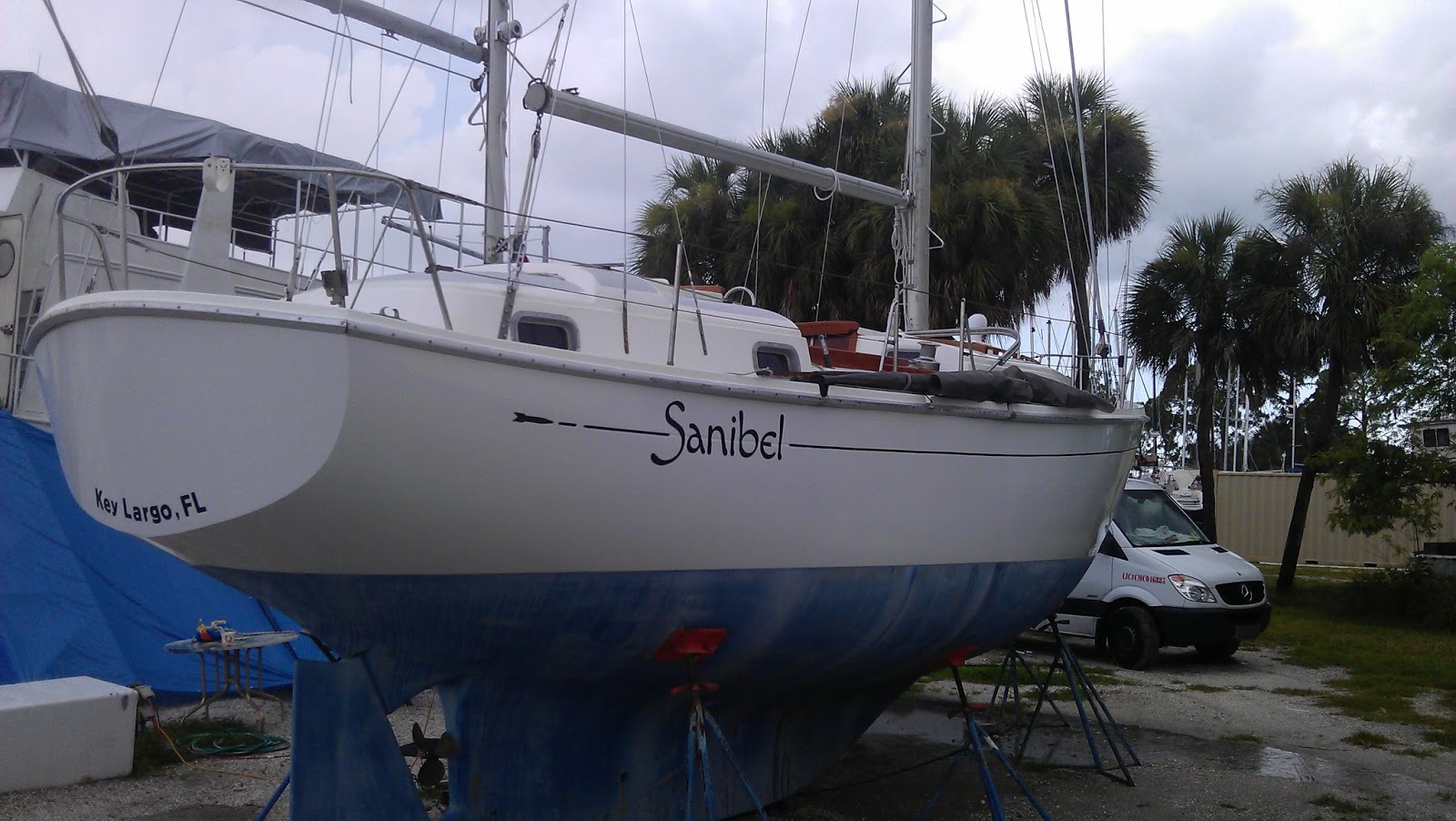 We measured, cut and glued all the cushions for the cockpit, and saloon. We'll now be able to order fabric and I can begin sewing them.


We finished the varnish work on the teak on the deck and adhered the graphics giving Sanibel her identity. Pictures attached. 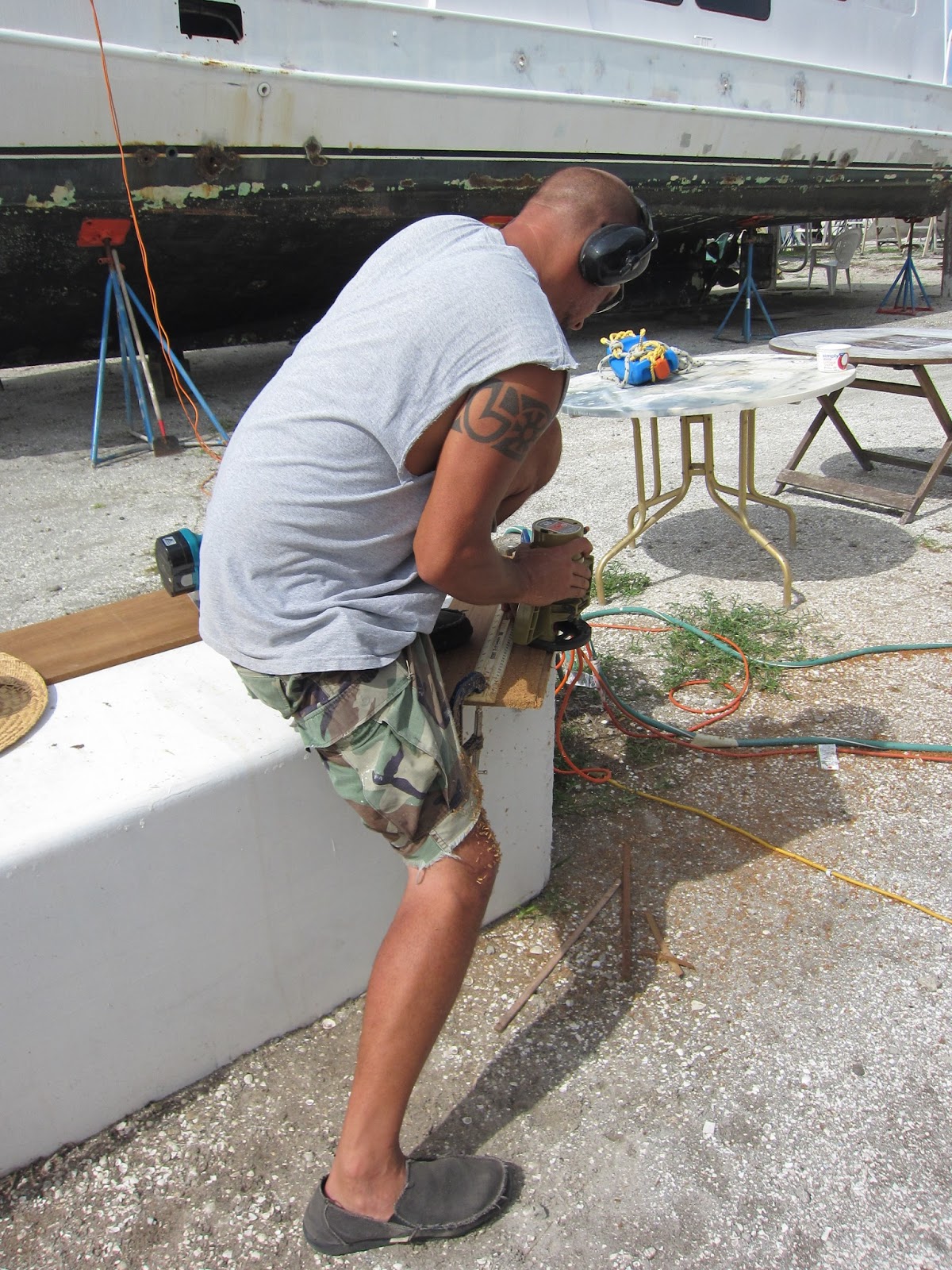 I received my TEFL certificate in the mail, which was exciting. Even though I finished the class in April, finally receiving the certificate gave me closure. I took the final test for the young learners class and received a passing grade. Now I await the arrival of that certificate.


Jimi successfully tested his homemade hookah rig consisting of a 12v automotive air compressor, watter hose, 1/2 of a snorkel and some odds and ends.Successful test yesterday of my homemade hookah rig. He said it  worked great to 15 ft but didn't pump enough O's for 25 ft. Still, will be good for boat maintenance and maybe a lobster. 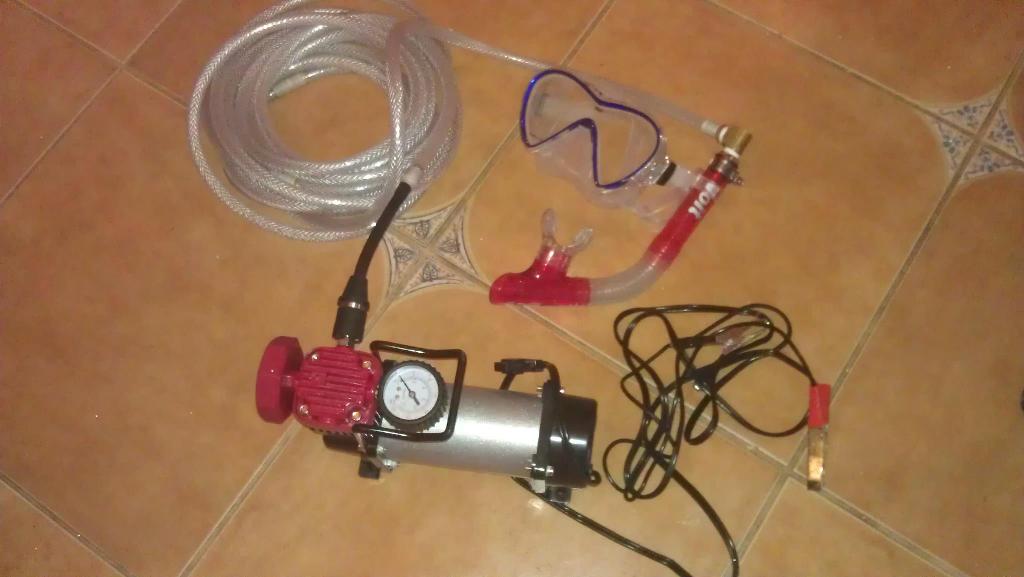 I flew to Nebraska to visit my family on July 21st. My parents are the only ones that knew I was arriving. It was a pleasant surprise to everyone else. I have kept myself very busy attending the Harlan County Fair, moving Jennifer to her new residence, helping mom paint the spare room in her house, reading, watching the "Tudors" series, and working on many craft projects. I'll fly home in just over a week on August 25th.


Both my Aunt Thea and mom have surgery's in Kearney this Friday. Between Dad, Marie, and myself, we'll tote them to Kearney and back home again.


Jimi has had some visitors while I have been away. I am sad to say I missed friends Spartek and Zana, who were there for a day or so. They toured Sanibel and went for dinner. Friend, Matt Williams spent a week with Jimi helping him on Sanibel and touring the area. Jimi found and purchased a dingy for Sanibel. Jimi and Matt have had it on the Gulf testing and playing. I hear the stories of how much fun they are having and can hardly wait to get home to go for a ride myself.


This gives you a brief update for now. When I get back to Florida, I'll get back in to my two week writing schedule.