This week was special because it was Jimi's birthday. He does not like a big deal made out of his birthday, but in my family we have always celebrated the life of our loved ones, which as you read on, you will see this is what I have done for him. Every year he chooses a place to go for his birthday and this year he wanted to climb Longs Peak up to Chasm Lake in with the purpose of capturing the sunrise on the Longs Peak Rock through his photography. We left Saturday morning at 4:25am, began our climb at 5:18am and arrived back at the truck at 12:18pm. Seven hours with a few stops for photographs, the round trip was 8.4 miles and the terrain was good: not too steep, only some big stair steps, minimal ice, and practically no snow. The first hour of our hike was dark, but watching the sun rise while on the mountain was beautiful. On one side the moon was going down, as the sun was coming up on the other side, which was pretty cool to see. 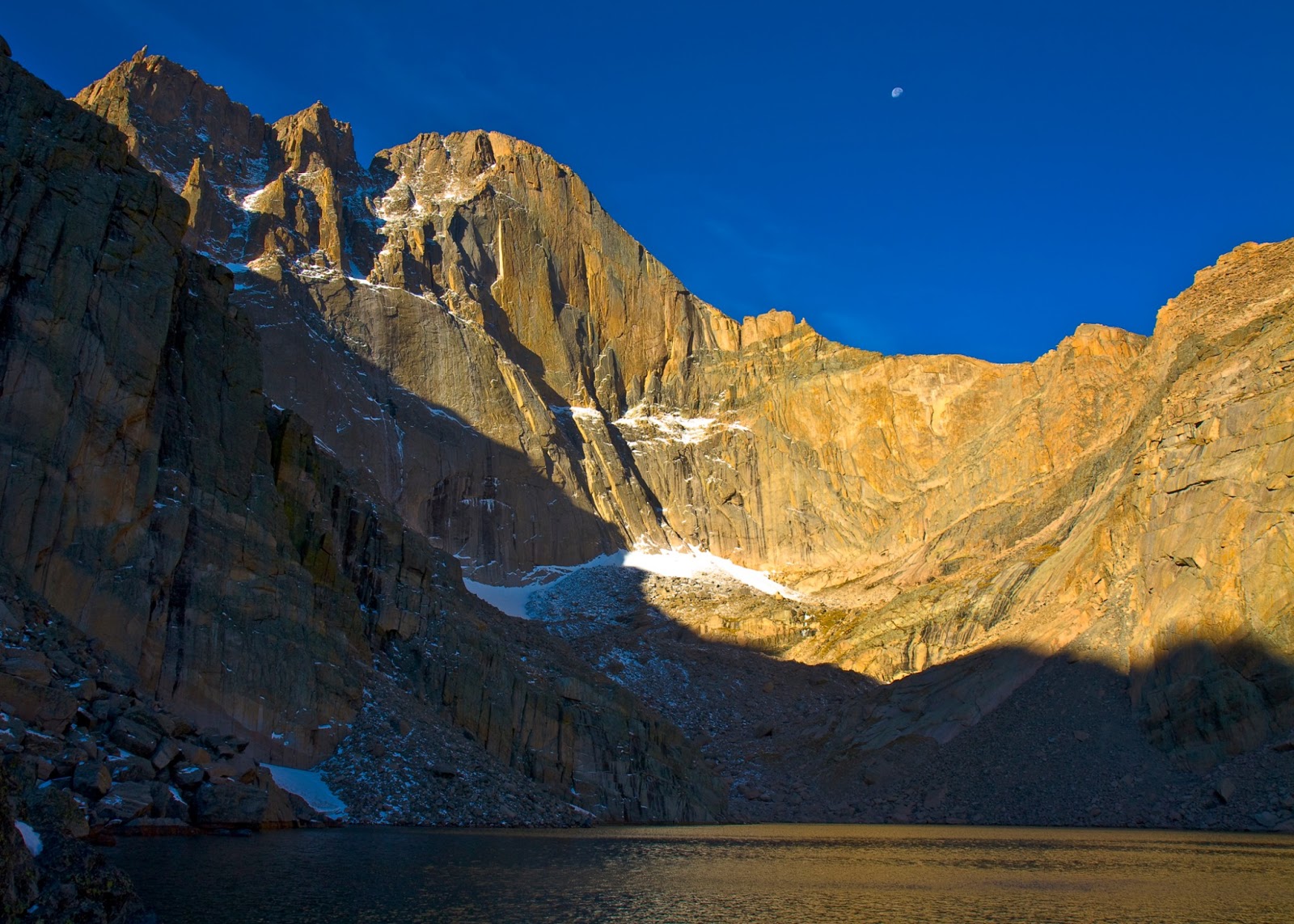 Jimi got some fantastic pictures of the moon with plenty of detail. While he took pictures at our destination, I explored the lake hoping from rock to rock. He didn't get the exact pictures he was hoping for. He thinks it is too late in the season, but maybe we will try again next year. In fact, maybe we will climb to the top of Longs Peak next summer.

Unbeknownst to Jimi, over the past few months I have been designing, planning and building a life size makeshift birthday cake. I took Wednesday (his birthday) off work and while he was in school, I set the cake up in our kitchen with lots of birthday balloons, a real birthday cake and an overflowing amount of birthday cheer. When he arrived home, the Happy Birthday song was playing in the back ground and I jumped out of the cake. It was really pretty cool and he was stunned. I took him to the Rib House for a late lunch/early dinner and rest of the evening he relaxed in the living room.

The weather was cold and drab the first half of the week, but by Friday the days were beautiful in the mid 70s and sunny. Jimi took advantage of the nice weather to winterize the outside windows. He put storm windows and plastic on most of the windows to prevent the cold winter drafts from entering the house. We still have three windows left, but have decided to wait until winter really sets in. The plastic on those windows will be placed on the inside of the house; therefore, the weather has no bearing on our timing.

Miller has a large lump growing on his gum just under his left side bottom K9 tooth. It is now about the size of a pea. Jimi took Miler to the Veterinarian on Tuesday. They sent a biopsy to the lab checking for cancer. Even though the test is not conclusive, we were happy to learn that it may only be a bacterial infection. Miller is taking antibiotics for the next two weeks to hopefully clear it up. The lump may never go away, but we can watch it and as long as it doesn't get any worse and we don't see any other symptoms, we think all will be fine. Jimi figured out that Miller will be 14 years old in January.

Molly and Razor spent the entire weekend in Mead with Jennifer. She said things went pretty well. All the dogs got along and she expects that once her puppies are gone in a couple of weeks there will be minimal problems with their transition.
Exciting news…Jimi has created a weblog for us. He's been talking about it and working on it for a while now, and it is finally up and running at it's minimum. I will be posting my weekly updates there, as well as there are additional pages which will hold all the scrapbooks I have created and other fun things. I am not going to send you the link right now, as we want to perfect it a little more first. However, watch for the email from me with the link….it's going to be pretty cool. We are both excited about it.

That's it for now. Have a wonderful week.
Love Everybody,
Lorie & Jimi
Posted by Jim N at 12:10 PM