Half way down the Exumas chain 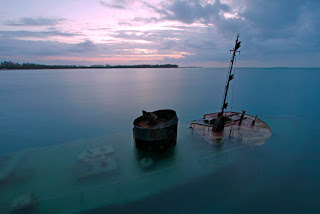 We spent nine days at Morgan’s Bluff. We hitch hiked to the grocery store for perishables; some of the prices were comparable and some were…uh…to put it nicely ridiculously outrageous: a loaf of bread was $2.80 (comparable), Bar S hot dogs were $5 a pack (ehh – slightly high), two pounds of ham – bone in was $3.40 per lb (not bad), a block of cheddar cheese was $5.?? per lb (ehh – ok) and one pound of 80/20 hamburger was $8 (what??? Holy cow…that’s expensive). We really had to decided how bad we wanted ‘cow’ and considering we hadn’t had any meat for nearly a week we bought two one pound packages.
After nearly a week of having the anchorage to ourselves, six boats showed up and spent two evenings visiting. We found some of them fascinating and we think you will too:  Craig and Barb Morgan on S/V Undaunted are estimated to be in their fifties. They sail a few months every year to the Bahamas. Christian on S/V Cease the Moment is a young man of thirty one years old who also sails a few months a year. Mike and Jennifer aboard S/V Catalina are in their twenties. They are Norwegians who store their boat in Miami flying from Norway to Miami every year to sail for a few months. Two young men Morgan and ???? aboard S/V Windrain. All I really remember about them is they are purists, which means they WILL NOT motor. They ONLY sail and if there isn’t any wind, they don’t go anywhere. Similar to us but to more extreme. Two sisters ages seventeen and eighteen from New Zealand. Their parents purchased this boat and the girls are sailing it by themselves to Australia for resale. The parents along with their other sister of fifteen years old are on another boat currently in Florida also Australia bound. I found these girls to be interesting; kudos to them. We also met up with an older couple who have the luxury of all boats: a 52 foot boat equipped with everything you could imagine. We followed them to Highborne Cay. Al and his wife along with their dog Traveler are aboard S/V Independence. We met up with them again yesterday in Staniel Cay and another couple David and Linda on S/V Sandpiper.
Jimi heard about a water spout over the VHF radio the day before we left Morgan’s Bluff. Jimi popped his head out of the companion way to see that it was about a mile away. A water spout is a tornado over the water that sucks the sea water up towards the clouds. Though dangerous, they are not as destructive as land based tornados. It was an interesting sight.
We left Morgan’s Bluff around 10 or 11am on the 23rd crossing the  tongue of the ocean bound for Highborne Cay (pronounced Key). The first three hours we did a whopping one knot per hour – it’s ok, you can laugh – we were. Later things picked up…. A LOT, I might say. Right about sunset the seas were rough again up until we arrived at the anchorage area at 6:30am on the 24th. Jimi pulled another over nighter; however, with a full moon, it made for a bright journey on the ocean.

We spent three days on the Northern tip of the Exumas at Highborne Cay. The privately owned island is home of a very expensive resort. The office personal seemed to be from the U.S. and were not friendly toward us. Dozens of Reef Sharks and Nurse Sharks hovered the fish cleaning station at the marina for scraps. We stood on the dock taking pictures and motored by them in the dinghy. We spotted  a nice Dexter filet knife on the bed of the ocean floor under the sharks. 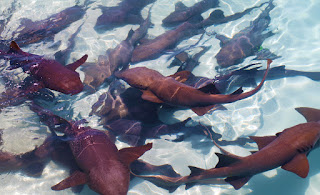 Once the sharks vacated, Jimi jumped in the retrieve the knife – score!. We also found a large heavy beach towel washed up on the beach wet and full of sand even half buried. We rinsed it off in the ocean to find it free of stains and rips – another score! As we see it we had a $45 dollar day in our favor. 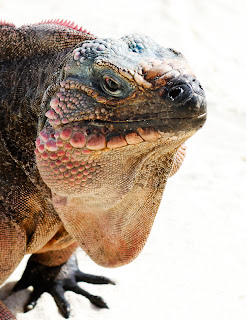 We explored a small island close by called Allen’s Cay; the home of iguanas and only iguanas. When they see a dinghy approaching they scramble from the rock and brush meeting guests on the beach awaiting snacks. The tourists bring them lettuce and other fruits. We enjoyed meeting their acquaintances and taking their pictures. About two dozen greeted us, but there were more scattered around this island and others. 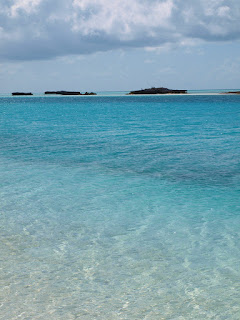 Our next destination was fourteen miles away to Shroud Cay. The islands here are made of ancient coral heads resembling large rocks full of holes and sharp pointy edges (sharper than a razor blade), patches of secluded beaches, some with trees and mangroves and some without. Shroud Cay has sand bars everywhere just out in the middle of the ocean. We took our dinghy back through a salt water stream not realizing the tide was going out. It was so shallow that Jimi had to walk us out most of the way. The island also had a fresh water stream coming off the land displaying several colors. The shallow salt water was clear with a tan tint as we could see right down to the sand, and then the slightly deeper parts were a rich turquoise and even turning darker as it became deeper, however, the coolest was where the fresh water met the salt water. The color was a lime green, yet still as clear as can be. No matter the color all the water is as clear as looking into a swimming pool.  We stayed at Shroud Cay for a couple of nights and then moved on five miles South to Hawksbill Cay. 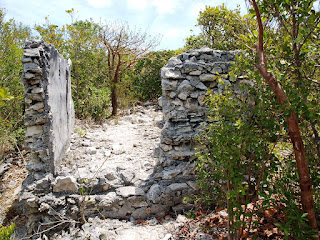 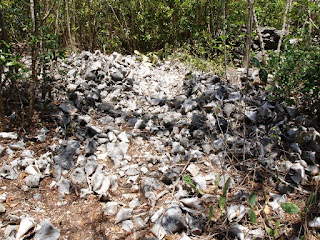 Hawksbill Cay has a trail leading to what’s known as the Russell Ruins. There isn’t much left of the buildings, but none the less we were awed. From 1785 to 1830 the island consisted of ten houses and some other buildings; the British and loyalists leaving the U. S after America’s independence settled the island (as well as many other Bahama islands). Thousands of conch shells  all harvested lay around the beach in piles by the once structures and practically everywhere else you look; over time they have turned black as coal from the elements. I just couldn’t grasp the piles and piles of conch shells. Jimi is in search of his own modern day treasure. It is said that seekers can find hand blown glass bottles from the 1700 and 1800s in this area. We found plenty of them - broken – now to find some in tact. We found a perfect little spot to snorkel just off the beach and away for any breeze or current. I didn’t take my underwater camera when we snorkeled, but had planned to when we went back; unfortunately, we had to leave the following day and weren’t able to go back. 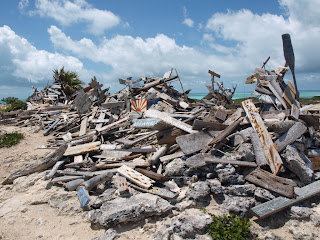 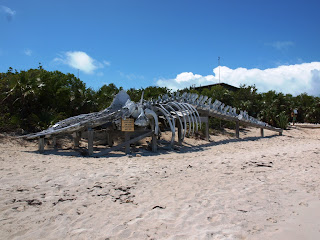 Ten miles South we made our way to Warderick Wells Cay. This is the headquarters for the Exzumas Land and Sea Park, which we have been exploring. Fishing in the park is prohibited and it’s just as well because we haven’t had any luck at catching anything anyhow. Warderick is an interesting place.

The skeleton of a 52’ sperm whale lays on the beach. Some years ago a ship wrecked on the rocks and all souls were lost. Legend says you can hear the cries of the ones who perished if you stand at the top of the mountain, called Boo Boo Hill. Atop Boo Boo Hill visitors can carve or paint their name and sailing vessel on a piece of wood and leave it. It’s a large pile. The island also has several blow holes of all sizes, which were really cool. We only stayed there overnight before moving on.

Our next destination was Staniel Cay twenty miles away. It’s a little more civilized here and once again the people are super friendly. Don’t think you can get away with walking anywhere without a wave and a smile at the very least. We think we will be here for a while. Even with some civilization, we have learned that internet on the Bahamas does not come easy. At least here I can send this email and upload it to our blog (for a price), but I am not able to upload any pictures. I have quite a few for you too. We are allowed to purchase 200mb per 24 hour period. It’s certainly better than nothing, so I won’t complain; however, I have to admit that not having contact with my family make me sad. I am in high hopes that once we get out of the Bahamas to more mainland area, internet will be more readily available as it is in the U.S.

A couple of weeks back Jimi and I spent an entire day going through our provision inventory and repacking it all. We pulled it out into the cockpit, so I could count and log it into a spreadsheet. Now we will keep track of everything we use and have a better idea of what we are low on. We should have done this from the beginning. We also vacuum sealed all of our rice, flour, oatmeal, dry milk, cheerios, sugars, cat food, and anything that the moisture might destroy.  This was quit the accomplishment and we both feel so much better. We were hoping the groceries wouldn’t be quite so expensive in a more populated area of the Bahamas, but it does not seem to be the case, at least at our current location. And the rum is not cheap either, as we were told it would be. Nearly double in price.

Definition: Hull Speed – is the maximum speed at which a boat can be pushed through the water and is a function of the boats water line length. This means that a longer boat has greater potential speed then a shorter one. Conventional craft can only exceed their hull speed when planing or surfing. However, multihulls with very long or thin hulls can go faster than their length would suggest, and so can vessels that use hydrofoils to lift their hulls out of the water. Guide to Sailing by Steve Sleight

Sanibel’s hull speed is 7.2 knots and her fastest speed was over ten knots with a boost from the Gulf stream.