The morning of July 14th we motored through the channel waving goodbye to Duncan Town. We anchored just a couple of miles away at Hog Cay. On the beach sits a couple of wooden structures of make shift shelters. 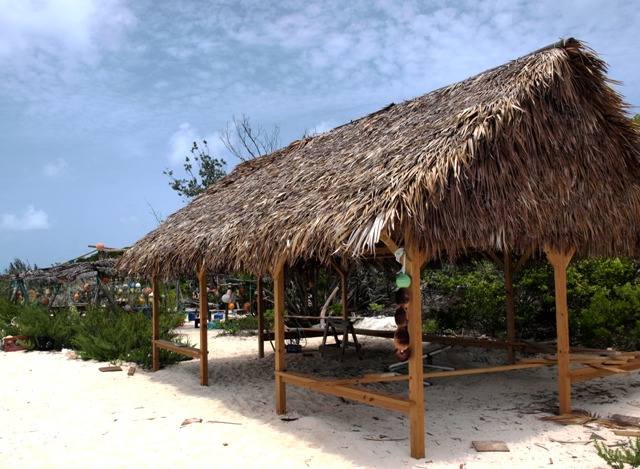 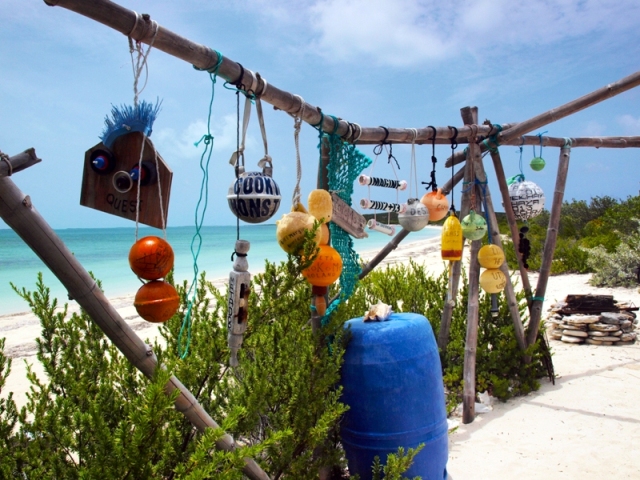 One is made of large round posts with a palm frown roof. The other uses bamboo and other items for posts and only part of the roof is covered. A couple of fire pits are present, crates used as tables and at the entrance is a sign that reads Hog Cay Yacht Club. Hanging around the edges of the structure are homemade signs people have left to mark there once presence at Hog Cay. We, meaning Jimi, made our sign, which now hangs there joining the others. Made from a large nut (name unknown), he cut the bottom off (so it resembles a bell – sani’bel’) and decorated the outside with colored markers.  A sunset set and two palm trees overhang the word “Sanibel” with “Jimi & Lorie July 2013” written beneath. The backside is colored black except for a half moon peering out. 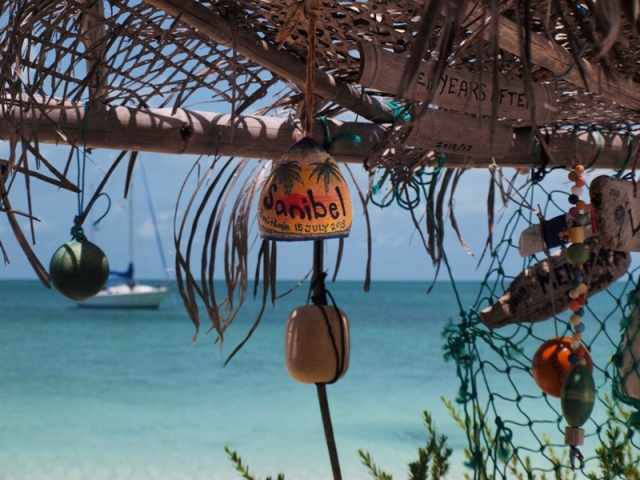 A well established trail led us to the other side of the island for our day hike. The beach was like many others with debris washed up on shore. Jimi found a figure carved  from wood approximately four inches tall. It appear to be a carving of a man with a long face holding a lamb. 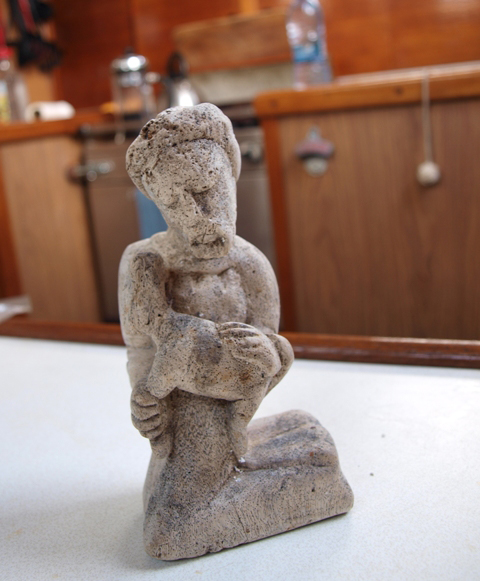 My first thought was Jesus. He let me have it and it now resides on the shelf next to my berth. There is an engraving on the bottom, clearly homemade, but it’s too hard to make out. A funny story regarding my new found friend – Jiimi was working one afternoon cleaning out the bilge (a dirty job). He would come through the cabin covered in oil and diesel fuel. No matter what he did or how hard he tried, he made a mess. As he was walking from the forward berth to the engine room grumbling choice words I refuse to type here, he looked over at me. I was sitting in the saloon holding my wooden figure feeling helpless and bad for Jimi. I calming held my Jesus up in his direction and said “Jesus loves you”. Even as angry as he was at the time, he could not resist, and while he tried to hide it from me, I saw the smile string across his face.

Our fishermen friends, who we refer to as Skinny and Louie, arrived one afternoon trying to gift us a grouper the size of a Labrador. After conveying there was no possible way the two of us could consume this beast, he reluctantly settled on gifting us a smaller grouper about ten pounds. These groupers can grow to the size of a small car. After cleaning and filleting the fish we breaded it in flour and fried it in our cast iron frying pan. Delish!
Another fisherman came by later that day and sold  us five conch at one dollar each. We’re not used to having so much meat on board. We grilled the conch and ate some with plantains. The rest we cut in to small pieces and mixed with spicy rice.

After our fill at Hog Cay, we sailed to Wilson Point. We set out to explore Little Ragged Island just south of it’s bigger brother,  Ragged. Walking along the beach, Jimi came across a small package. It was pretty clear to him what it was, but not to me; known as a square grouper, aka marijuana. Packed tightly and wrapped in several layers of cellophane  and packaging tape, it must have been thrown overboard by worried drug runners. This area was common for drug trafficking in the 80’s, but not so common now. We were shocked and also wished it had been a bundle of cash, also sometimes found. The next day we donated it to a good  home.

We spent a few hours on shore at Percy’s place enjoying random conversation and photographing the two ship wrecks on his beach. 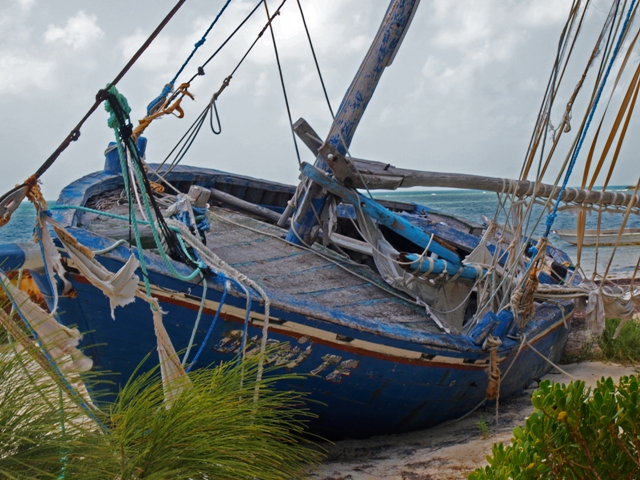 We are now prepared to sail away:  the main sail is reefed, the dinghy is stowed on deck and everything is put in its place. We may be off the grid for a while (no SPOT or emails), but not to worry, all is well. We will be sure to make contact as soon as we are able. Talk to you in a couple of months.