Here and There in Honduras 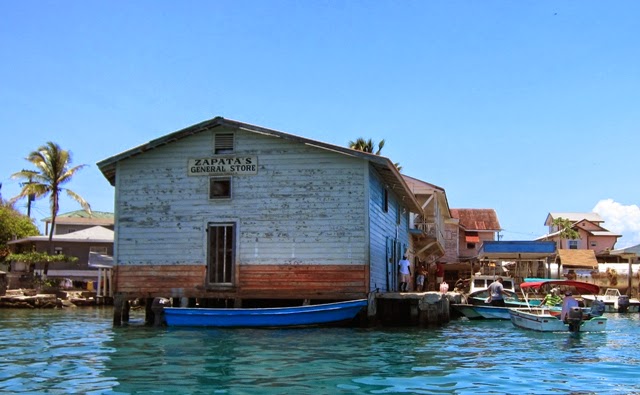 I had wanted to write a week ago, but when we moved to a new anchorage, we found ourselves without an internet connection. I’ll have to back up a bit to catch you up to the present day.

On the sail to Honduras, Eric caught a large tuna. He invited us and Gerard and Elle to share in his catch. Jimi and I provided the appetizers: bananas wrapped in bacon. Sandrine prepared the tuna in a sauce with rice and Gerard and Elle treated us with two flavors of homemade ice cream, mango and chocolate, made from their own ice cream machine. We were suppose to play Mexican train after, but the hours flew by and we didn’t have time. 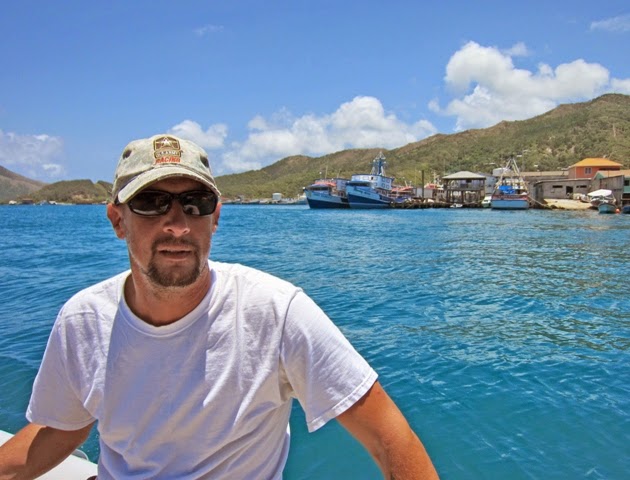 A few days after our last post we decided to move to another anchorage a couple of miles away. The area was empty. We were the only cruiser there, until one evening a sailboat anchored not far from us. After a couple of hours Jimi noticed they weren’t floating. The tide had gone out and they were sitting on the ocean’s sandy floor.

Jimi jumped in the dinghy to offer them some assistance. After roughly and hour of tugging and pushing with two dinghies, and the use of the second anchor, the monohull was again floating. They left the area shortly after and we heard them on the radio later telling their friends about their misadventure. Even with our own problems piling up, Jimi was able to offer a lending hand to someone in need.

On our way to the new spot, our Garmin chart plotter quit, it just blacked out. Jimi tried numerous troubleshooting attempts, but nothing brought it back to life. He then called Garmin tech support just to hear, “We’re sorry sir. You can send it in and we’ll refurbish it for $225.” The fact that it’s less than two years old and we paid nearly $700 for it and the fact that we are in Honduras, had no bearing and we got no sympathy.

Being without the chart plotter isn’t the end for us. We have other means to chart our course, but the crucial point is the loss of depth. Our depth sounder was wired in to the plotter. Sailing without knowing our depth could be risky.

Jimi had another idea though. He had a spare depth sounder aboard. The old depth sensor imbedded in Sanibel’s hull had to come out, so the spare could be inserted. Normally this is only done out of the water, but we had no choice.

I was nervous, but Jimi went forward. After a lot of pounding and banging, he removed the old sensor. Water sprouted through the almost two inch hole until he could get the spare in. And even then the spare was a different shape than the original and water continued to leak in. I sopped up water with a towel, ringing it in a bucket, while Jimi took a tube of  5200 and dove under Sanibel to apply the goop and fill the hole. This process took a few hours, but we finally succeeded. To our disappointment the spare depth sounder did not work.  He even tested it before installing it and it worked. He tested it again after he installed it, but before he glued it in place and it worked then too. However, now it doesn’t work.

We are now sailing without any measure of depth other than a thirty foot piece of string with a weight tied on one end. 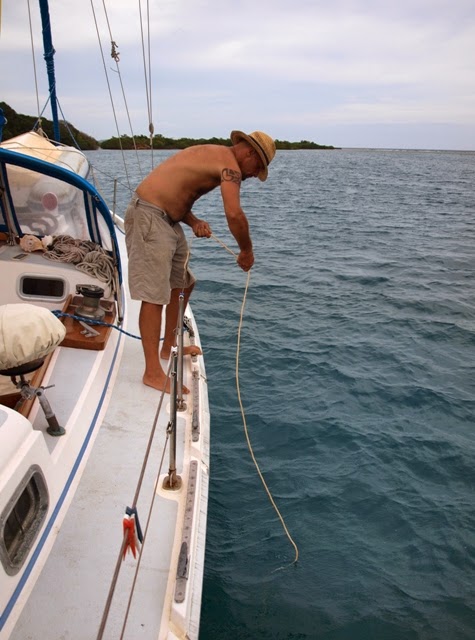 That’s not all our bad news, at some point during one of our recent sails the throttle lever broke off. Jimi now uses a pair of vice grips to give our old girl the momentum she needs.

Not to be discouraged. We take the bad with the good and on a sail boat these things are to be expected.
May 24th was my day…my birthday. My family has always made birthdays a special event and even though I am far from home, I still try to do it. Jimi and I baked a small cake (half of a boxed mix) cut it in the shape of a sailboat, frosted it and gave it two masts. It didn’t look fantastic, but it was recognizable as a sail boat. We were so eager to dig in that we didn’t take any pictures. We ate the majority of the cake that day and finished it off for breakfast the next day. Yum! 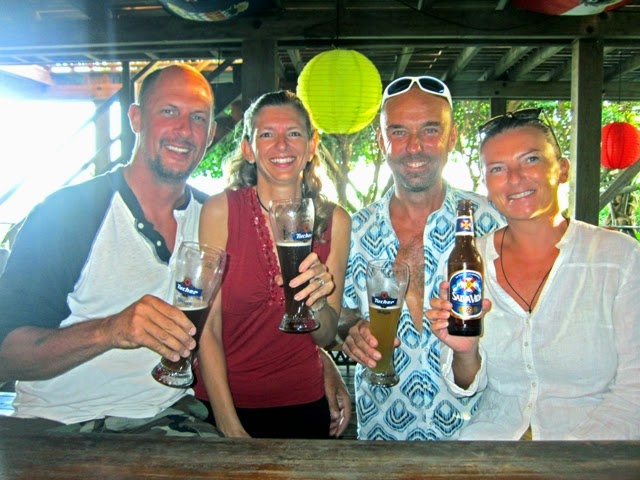 At 5pm that evening, we met our French friends, Eric, Sandrine, Gerard and Elle at a German run establishment for dinner and drinks. It was the Manati Restaurant and Bar. Clouse and Annette came from Germany nineteen years ago and have been running the restaurant for fourteen years. Hans, also from Germany, owns the land and building, but rents it to Clouse and Annette. Hans came to Honduras twenty-eight years ago and liked it so much, he stayed. We also met a couple of Americans and a man from New Zealand. The place was filled with laughter and every time, I turned around I heard a happy birthday.
For dinner I ate homemade German noodles and chicken cordon blue, which was divine. Jimi had French fries and roasted pork. I was surprised with a large dish of chocolate ice cream with a heart shaped lollipop on top. It was a great evening.  So if asked what I did for my birthday, I will say “I, being American, spent the evening with French friends, New Zealand and German company in Honduras.” Now who can say that? 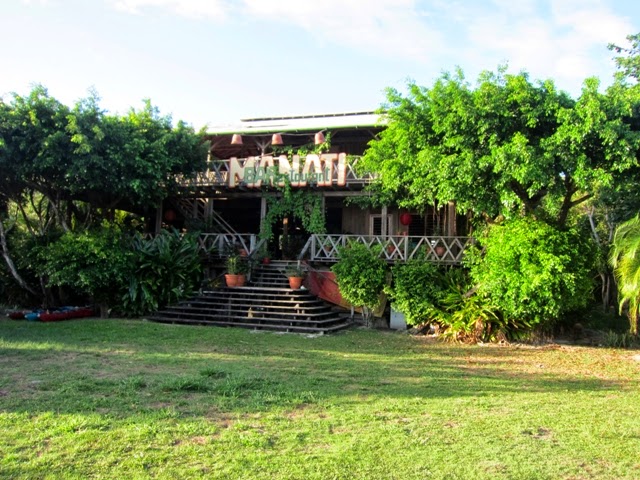 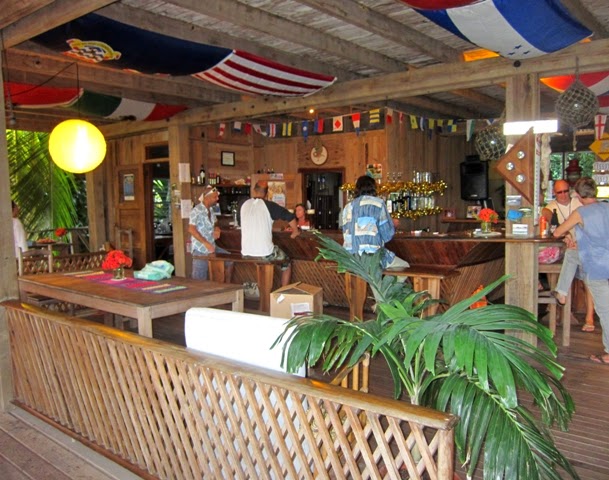 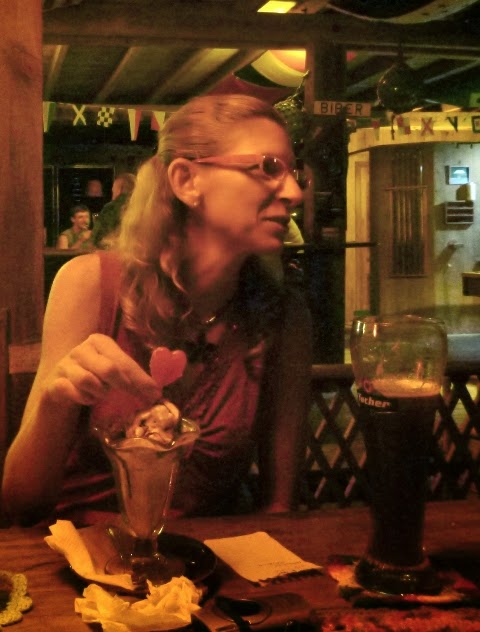 Jimi and I headed home about 1:30am. Gerard tried to talk us in to coming over to his boat to continue the celebration, but Jimi and I were too tired. We heard the next day that Eric saw the sun rise with Gerard. J
After our special night out, we stayed put for several days. Jimi and I both had projects to work on on Sanibel. We took laundry to shore, ate lunch at a local Honduras place and bought a few groceries. The lady that did our laundry, does it by hand. Many people don’t have washing machines and no one has dryers. We’re told the electricity is very expensive. She did three large loads for us for 300 LEM (about fifteen U.S. dollars). We picked it up a couple of days later, clean and smelling a lot better than it did when we dropped it off. She was even able to get all the ‘ring around the collar’ out of Jimi’s white shirts.

Unexpectedly one evening, Eric sent Jimi and message asking him if he wanted to go to Manati to play pool. “Sure,” we both said. We arrived expecting to have one maybe two drinks, play some pool and then leave. Sandrine wasn’t feeling well, so she stayed home and Elle came later. We played half a dozen (or more) games of pool, drank more than two drinks, and Jimi and I shared a dinner of german sausage and french fries. We got home about ten. 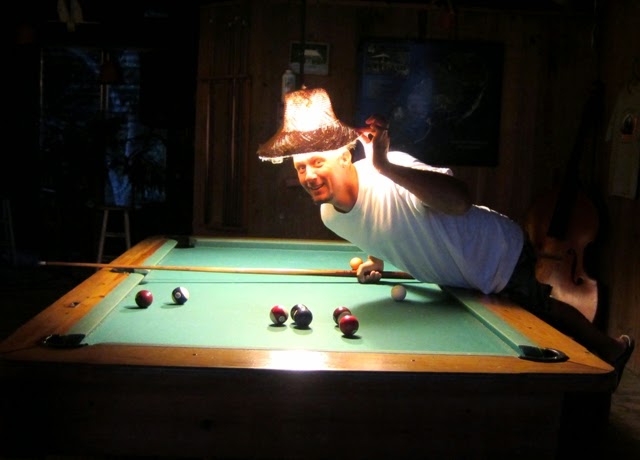 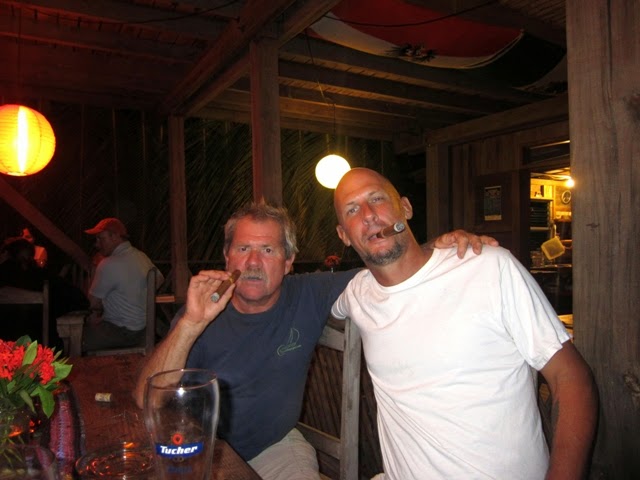 A couple of days later we left Banaka sailing twenty-six miles towards Roatan. That is where we sat without any contact from the world wide web. A local fisherman came by everyday for several days trying to sell us conch, lobsters and fish. We weren’t interested, but Jimi engaged him in conversation and we gave him some goodies to take to his daughter and family. 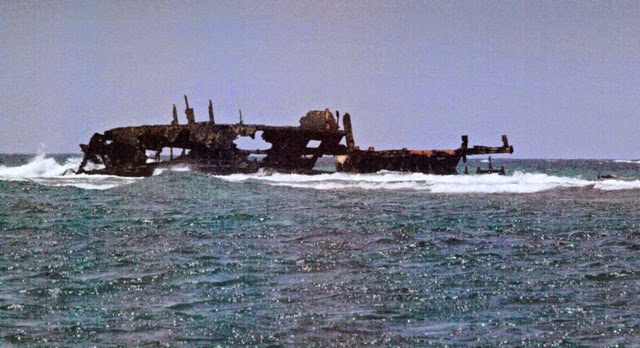 This is a wreck we came across while out and about in the dinghy.

Eric and Sandrine showed up after five days or so. They brought us water for our tanks and then we shared an evening of pizza, cookies and Mexican train.

This morning both vessels sailed to the French Harbor of Roatan. We have our internet back – Yay! Tomorrow we’ll check out the town and our surroundings. There are a lot of boats here and we understand that there may be weekly potluck events along with other cruiser activities. 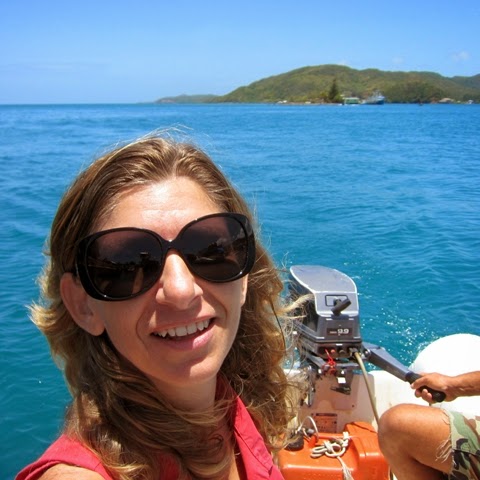 Posted by Lorie Nicolaus at 7:04 PM