Where in the world are Jimi and Lorie? It’s been more than three months since you’ve heard from us. As you read what we’ve been up to, you’ll understand why.

Earlier in the year we purchased flights from San Pedro Sula, Honduras to Denver, Colorado. We’d spend seven weeks in the U.S. visiting family and attending two major events. Our trip getting to the airport in Honduras was quite an adventure that will be amusing to tell you about.

We bought bus tickets to take us from Rio Dulce, Guatemala all the way to San Pedro Sula, Honduras. It was a five hour bus ride. When the bus arrived and we boarded...there were no empty seats. We had to stand in the middle isle with a dozen people . We stood for the 45 minute ride to Morales; it was hot, exhausting and uncomfortable. My arms and legs burned as I tried to hold on from the swaying turns of the bus, while holding two heavy bags. I couldn’t even let go long enough to put the bags down. Jimi and I could only laugh when sweat dripped off his arm onto the lady in the seat below us….embarrasing.

In Morales, we switched buses and this time we did get seats. However, they were in the very back, next to the bathroom. Some sort of fluid ran under and around our feet and the smell from the toilet was often overwhelming. When Jimi noticed the fluid he picked up my backpack, but it was too late. The bottom was quite wet. I smelled it and I think it was just water. When the bus stopped, workers would carry five gallon jugs of water to the bathroom for the toilet. Neither one of us ever used the toilet, so we’re not sure of its inner workings. Hmmm
The bus stopped twice: once to check out of Guatemala and once to check in to Honduras. Honduras was skeptical to let us in because our visa's expired in 15 days, but we convinced the guy we were leaving on an airplane the following day.
When we finally arrived at the bus terminal in San Pedro Sula, our hotel guy, Louis, was waiting for us. Finally, we were safely tucked in our hotel in the most dangerous non-war zone city in the world with an average of 3 murders per day. That doesn't stop us though, we ventured out that evening by walking eight or so blocks to the mall. Inside the mall there was no telling we were in another country. We grabbed something to eat at the food court and walked back to the hotel.
We had a bit of a hiccup the next morning. Since we reserved the hotel with a credit card, we assumed we could pay with a credit card. That was not the case and we didn't have enough cash. It didn't matter too much though; Louis took us to the airport the next morning where there was an ATM and while the ATM was only in Spanish, Louis assisted Jimi.
We had to go through several check points including security to get to our gate and at this point I told Jimi I would not rest until we were on that United Airlines flight and in the air…and finally we were on the plane. We flew to Houston where we cleared immigration and customs like it never happened. Then we flew to Denver where Jenn and Joel were waiting for us.
It was 11 pm, so we drove to our friend, Juraj’s house for some shut eye. The next day we drove six hours to Nebraska where my parents live. So, three long tiring days dealing with launches, buses, taxis, planes, trams and automobiles and we finally made it. However, it wasn't time to relax yet.
I’d been remotely planning a party for my parents 50th wedding anniversary for the better of a year and now we were down to the wire. We had appetizers, drinks, cake and cupcakes to make and the reception room to decorate all in two days.  My parents decided to renew their wedding vows just prior to the party. For the first time in her life, my mother wore a wedding dress; it was such a special time for all of us. Jimi was to take pictures of the event, but moments before the start of the ceremony his camera quit working correctly and we didn’t have a spare with us. It's sad because my parents deserved to have some photos of the event.


Here’s a short video Jimi and I put together for the reception.

The week after the anniversary party I was non-stop busy with making Jenn and Joel’s wedding invitations. We needed to get them out before Jimi and I would leave for Denver on the 31st. It was close, but I did it.
Our next event was for Jimi and I to attend the Nine Health Fair in Denver Colorado. We’d pre-registered and had to be there on a specific date. Since we are self insured, we had to take advantage of this free to low cost check up. We were checked from head to toe including all of our blood work and both came out healthy and free of any concerns. The following day we met with some friends at Old Chicago in Longmont. It was great to see them! 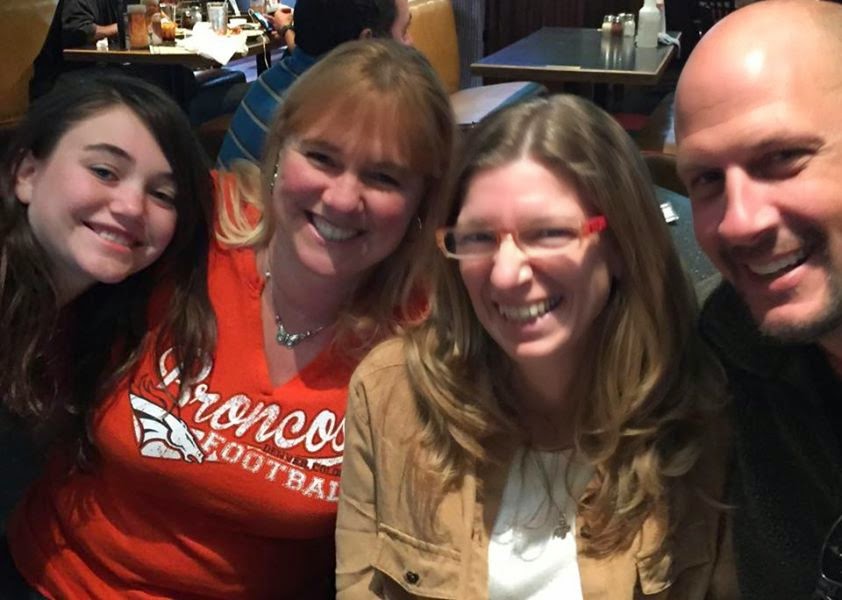 Very special friend Viktoria and her daughter, Grace. Love them!

Months earlier the company Jimi and I had worked for before sailing contacted me to see if I would be willing to work for them through the winter. Jimi and I put a lot of thought in to it and decided we could really use the income. This meant I needed to fly to Texas to get set up and while I was in McAllen, Texas for a week, Jimi stayed in Denver with our friend Juraj.
My trip went well. I got my old cell phone number back, a laptop and all the tools I needed. We negotiated that I would work remotely from  Kansas/Nebraska through rest of the year and then fly to McAllen, where the company would put me up in a hotel for a couple of months or until I was done working.
When I got back to Denver, Jimi and I went to a nice dinner celebrating our 3rd wedding anniversary. I almost feel cheated saying it’s only our third, since we've been together for what seems like forever – 8 years as a couple and then another six years prior to that as friends and co-workers.

When we got back to Nebraska, Jenn and I had a lot of planning to do for the wedding. I made the table decorations, two kinds of favors, the cupcakes and more while working full time. 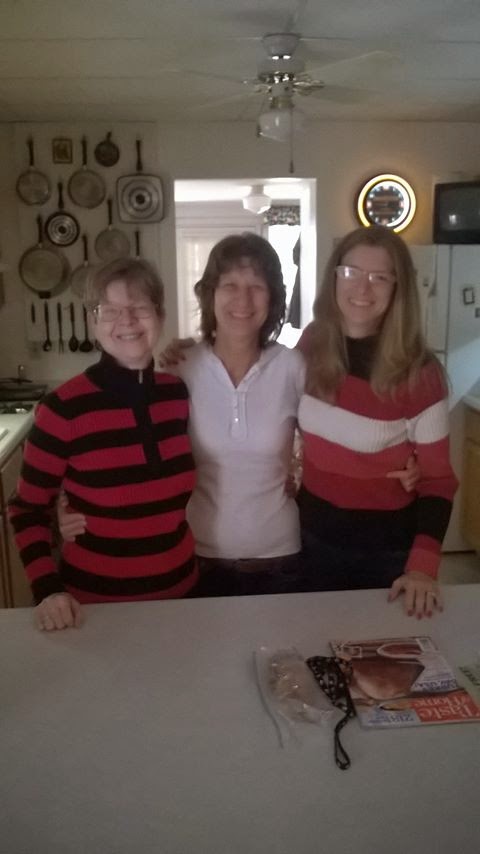 My mom, sister, Marie, and I ready for a big shopping day. 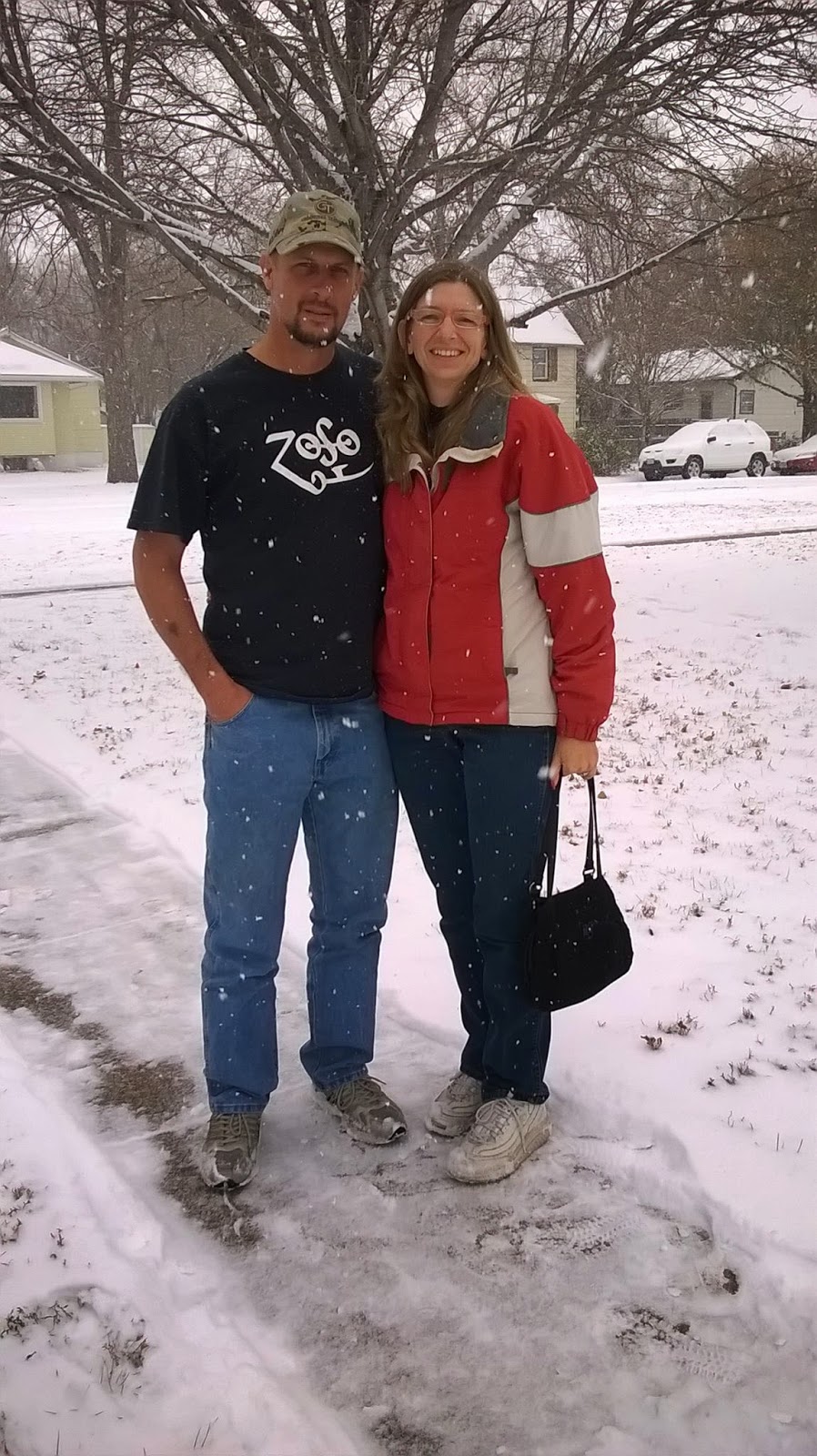 We had a thanksgiving dinner at Jenn’s house on Sunday the 23rd with Joel’s kids and Jennifer. It was nice. 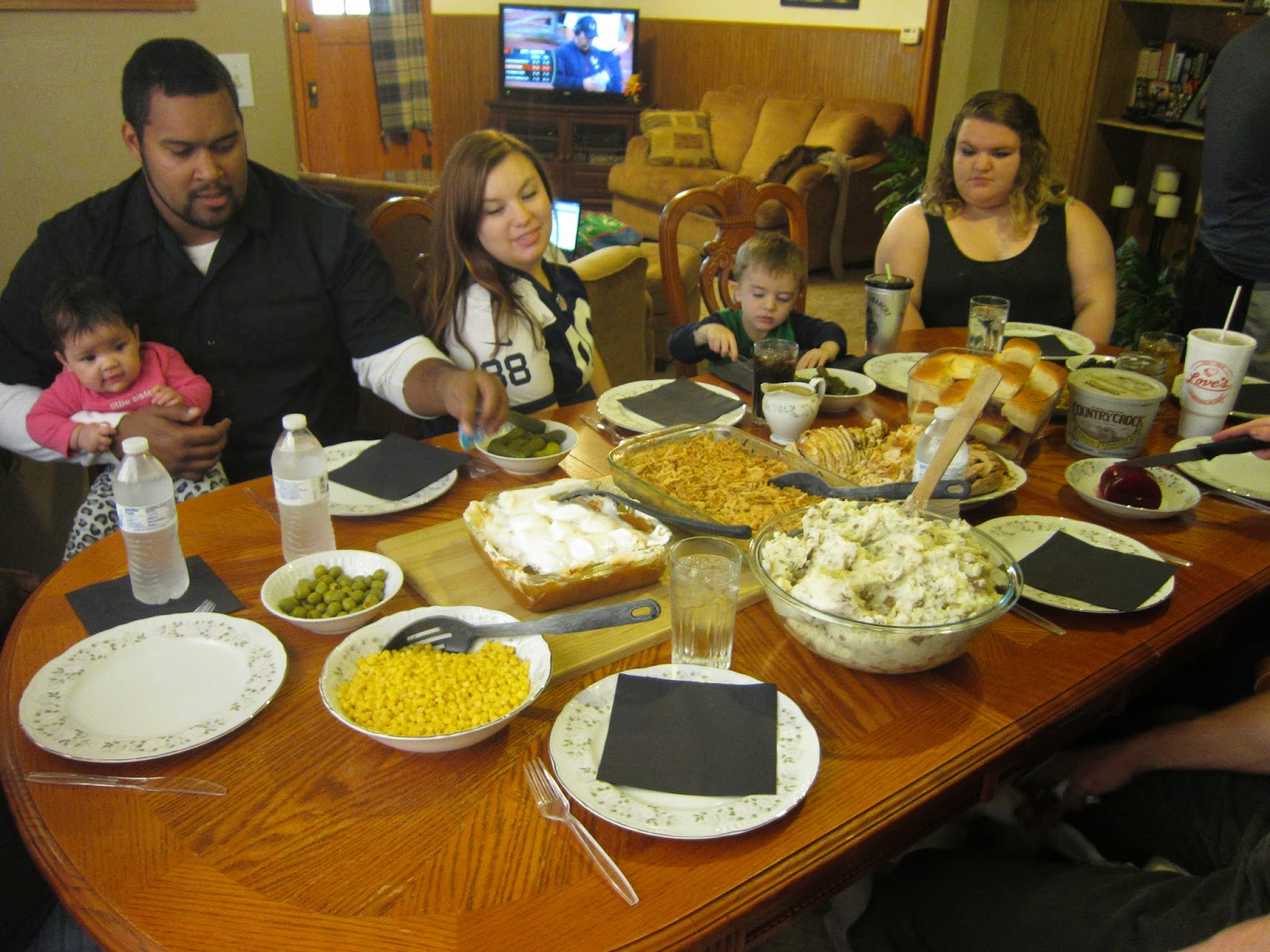 Then Jimi and I left Wednesday late afternoon for Round Lake, Illinois. We spent the Thanksgiving holiday with his brother and family. We couldn't have been more pleased to see how much our great nephew and niece have grown. Saturday we drove to Manchester, Michigan to spend an overnight with Jimi’s dad and then Sunday we headed out. On the way we stopped in Peoria, Illinois to pay respects to Jimi’s mom in the cemetery. We arrived back to my parents house at 5 am Monday morning. 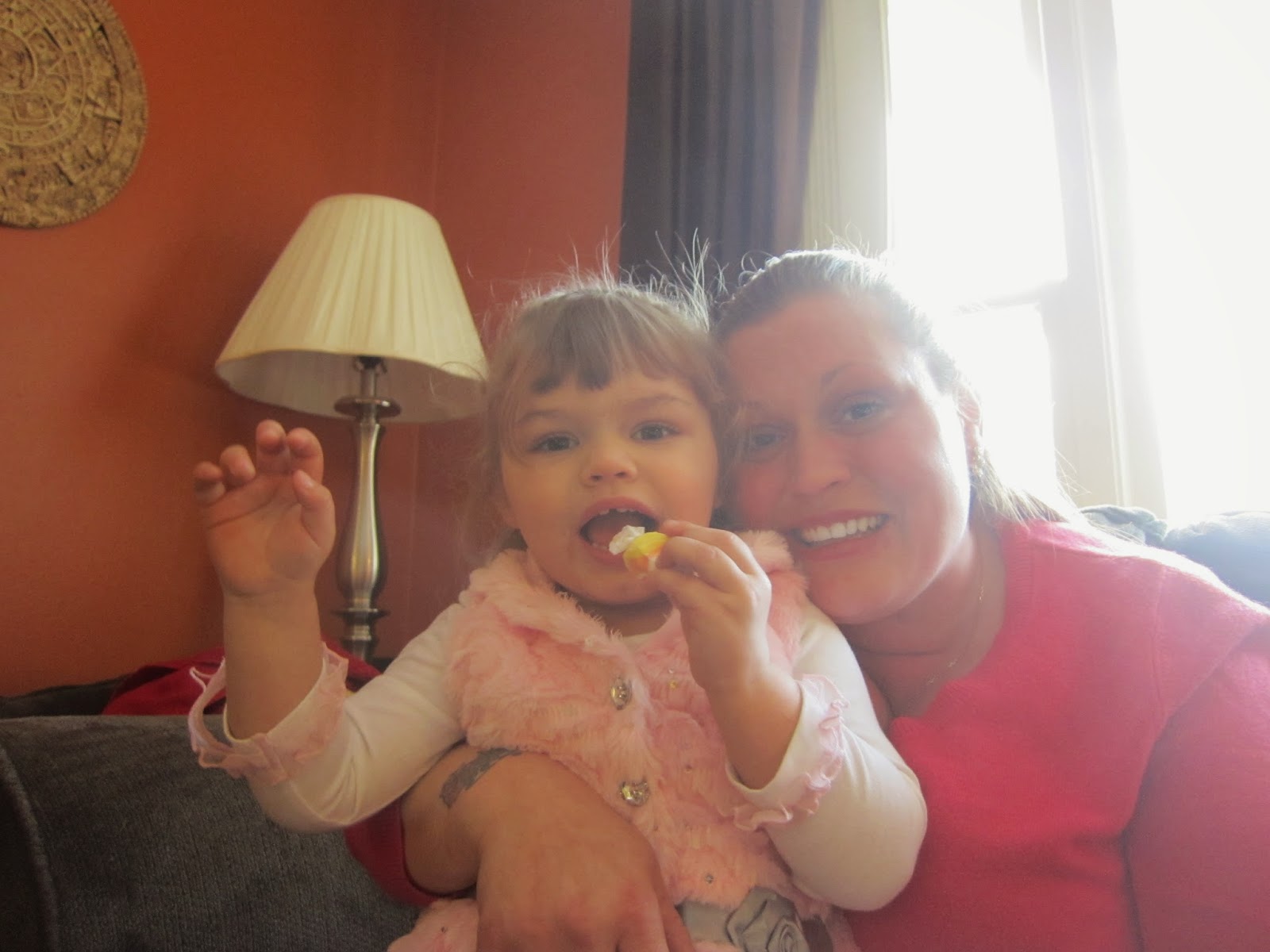 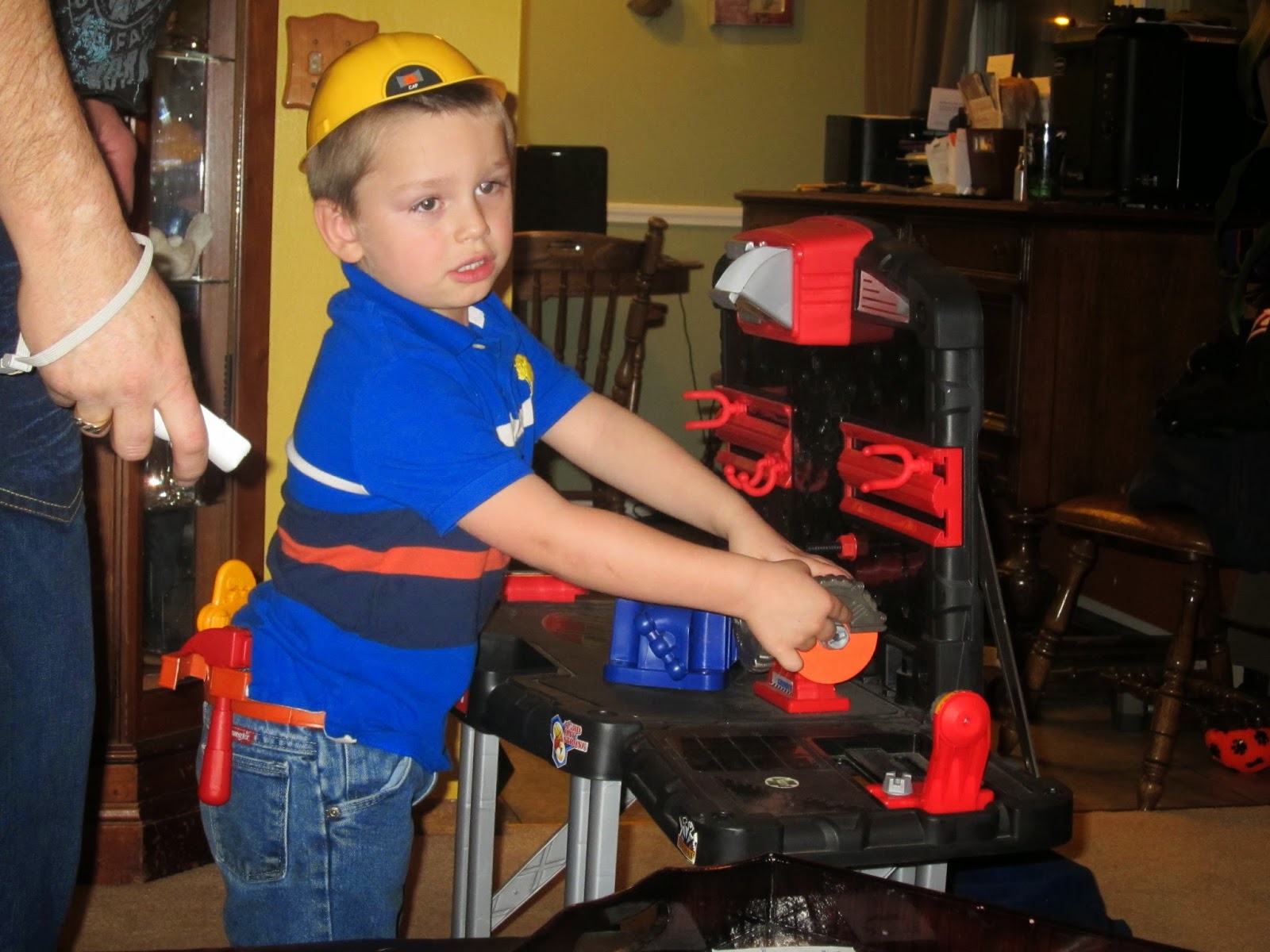 By this time is was December and the wedding was only a week and a half away. There was a lot to be done, therefore we were non-stop.  Jimi made another trip to Denver to pick up my son, Daniel and his girlfriend, Christina. Daniel and Christina were able to spend four days with us – a fantastic blessing. 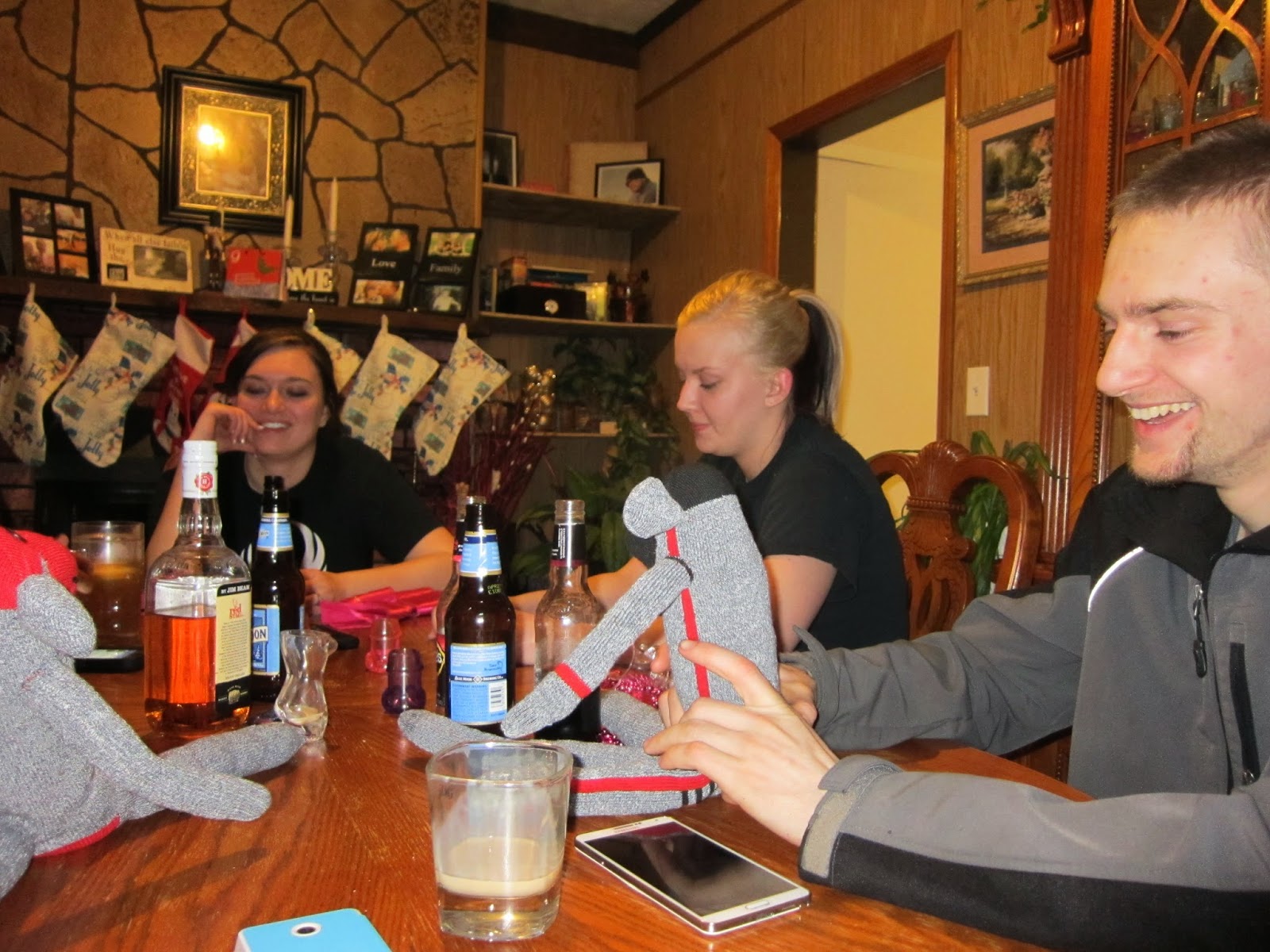 Then Jimi built an arch out of small tree branches that turned out to be phenomenal. The hall where the ceremony was held couldn't have been more perfect. Jimi performed the ceremony, Jenn and Joel each had two attendants, a flower girl and a ring bearer. Six cars full of people came out from Colorado, some from Tennessee and California. Jennifer and Joel are truly blessed to have each other and such great family and friends. The ceremony and the reception were magical and a huge success. Jimi and I are very happy for them and welcome Joel to the family with open arms. 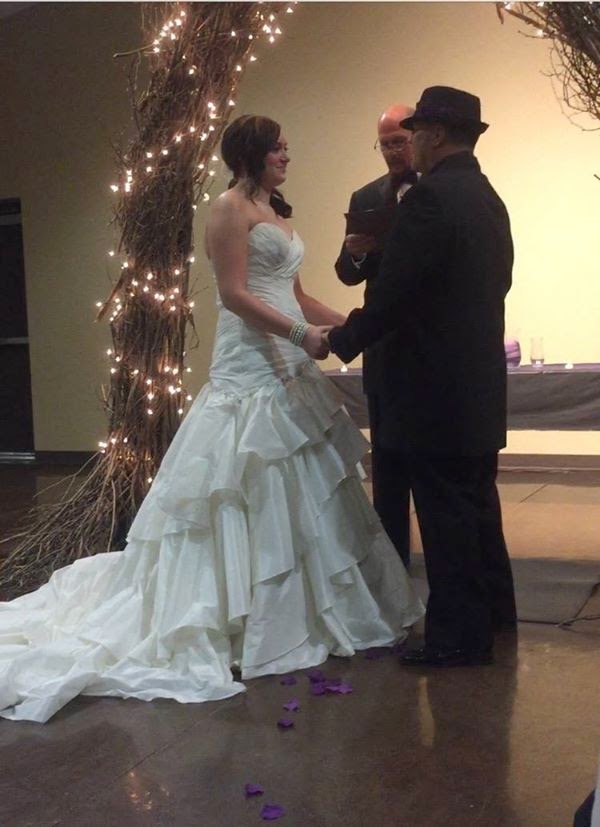 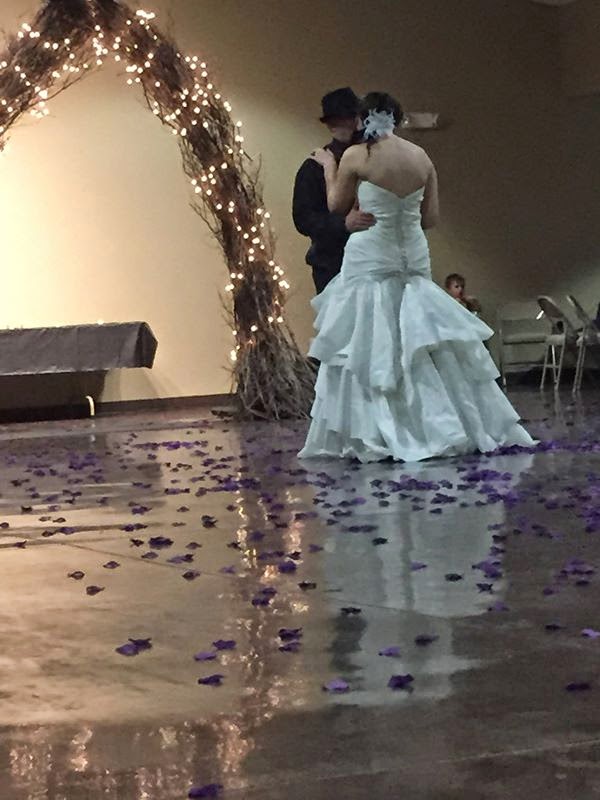 Me and my children.

Two days after the wedding we drove to Denver, so Jimi could fly back to Honduras. He left on December 16th and while we’ve been a part before, this one really hit me hard. I’ve been very emotional since he left and struggling with my decision of staying. Regardless, I stayed in Colorado for the week with my long time and best friend, Melody. My last night in Colorado I stayed with my long-long time girlfriend, Brenda.
Now that all that other stuff was out of the way and off my plate, it was crunch time to get ready for Christmas. I had exactly four days to finish my craft project Christmas presents and get everything wrapped. 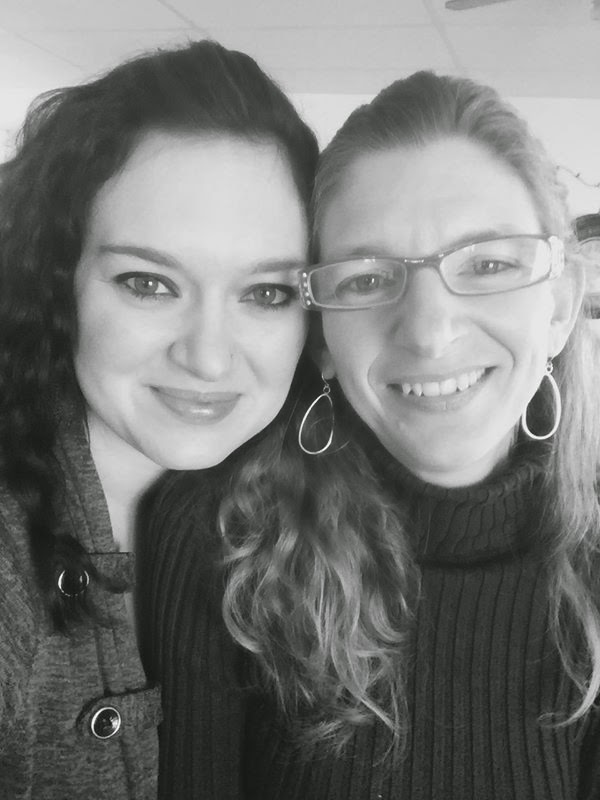 Jenn and I
Monday night we (mom, Marie and I) were up until 3 am, the next night we got to bed early at 1 am and on Christmas Eve bedtime landed at 2 am. I was so excited about being home for Christmas, I wanted everything to be special and perfect. I didn't get some of my projects finished and some others weren't really up to my standards, but I was so happy to be there that I let them slide. With all that said Christmas day I was hit hard with a throbbing stuffy head; as the day wore on it was apparent I was sick. 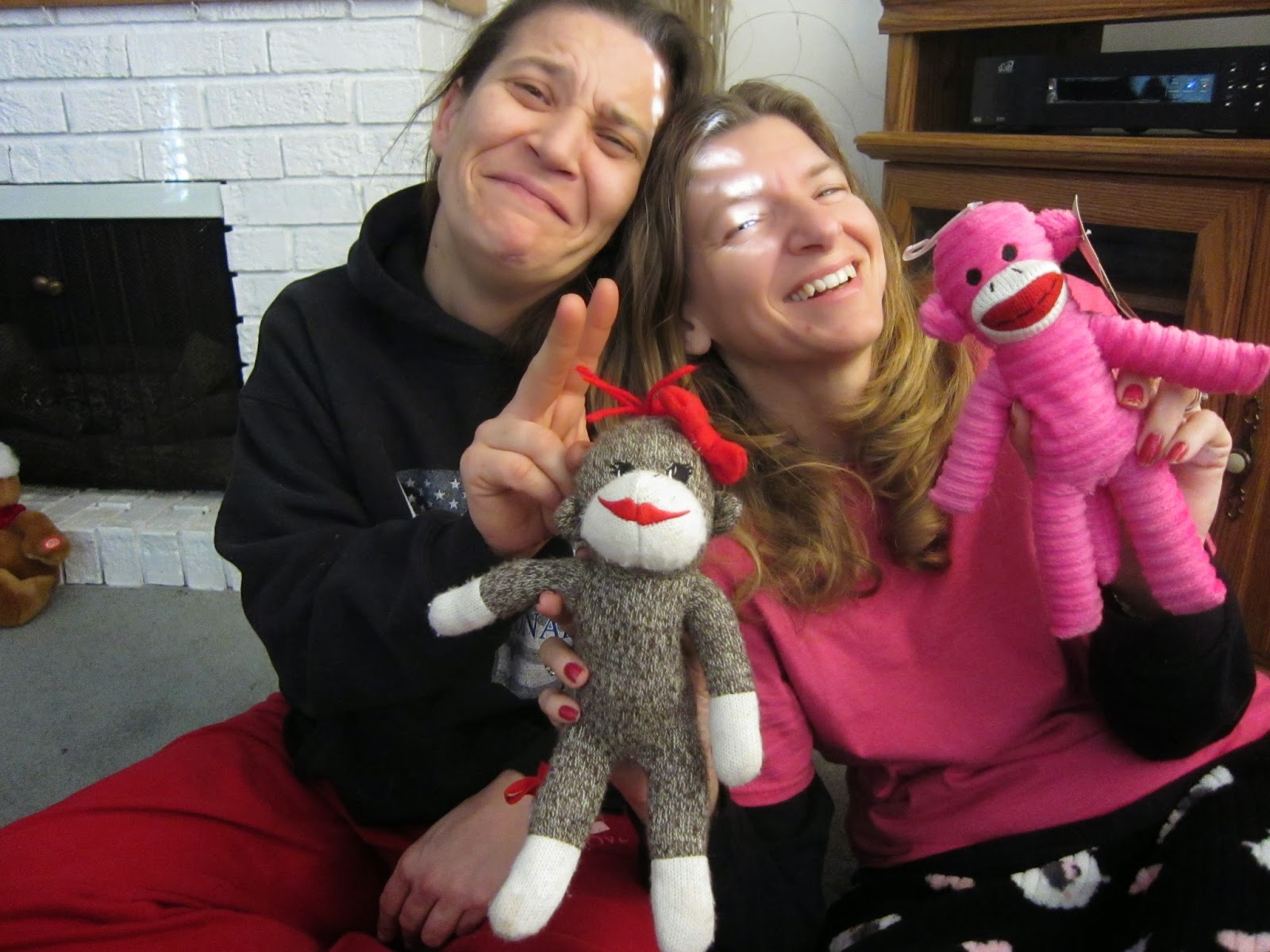 My niece, Jacque, and I goofing around with sock monkeys Christmas morning.
To  make things worse, the day after Christmas my cat, Molly who was almost 19 years old went in to kidney failure and I had to put her down. My daughter was five years old when we got her as a kitten and my son was three. Molly was a child of mine and a wonderful boat cat. Jimi and I are very sad losing her. 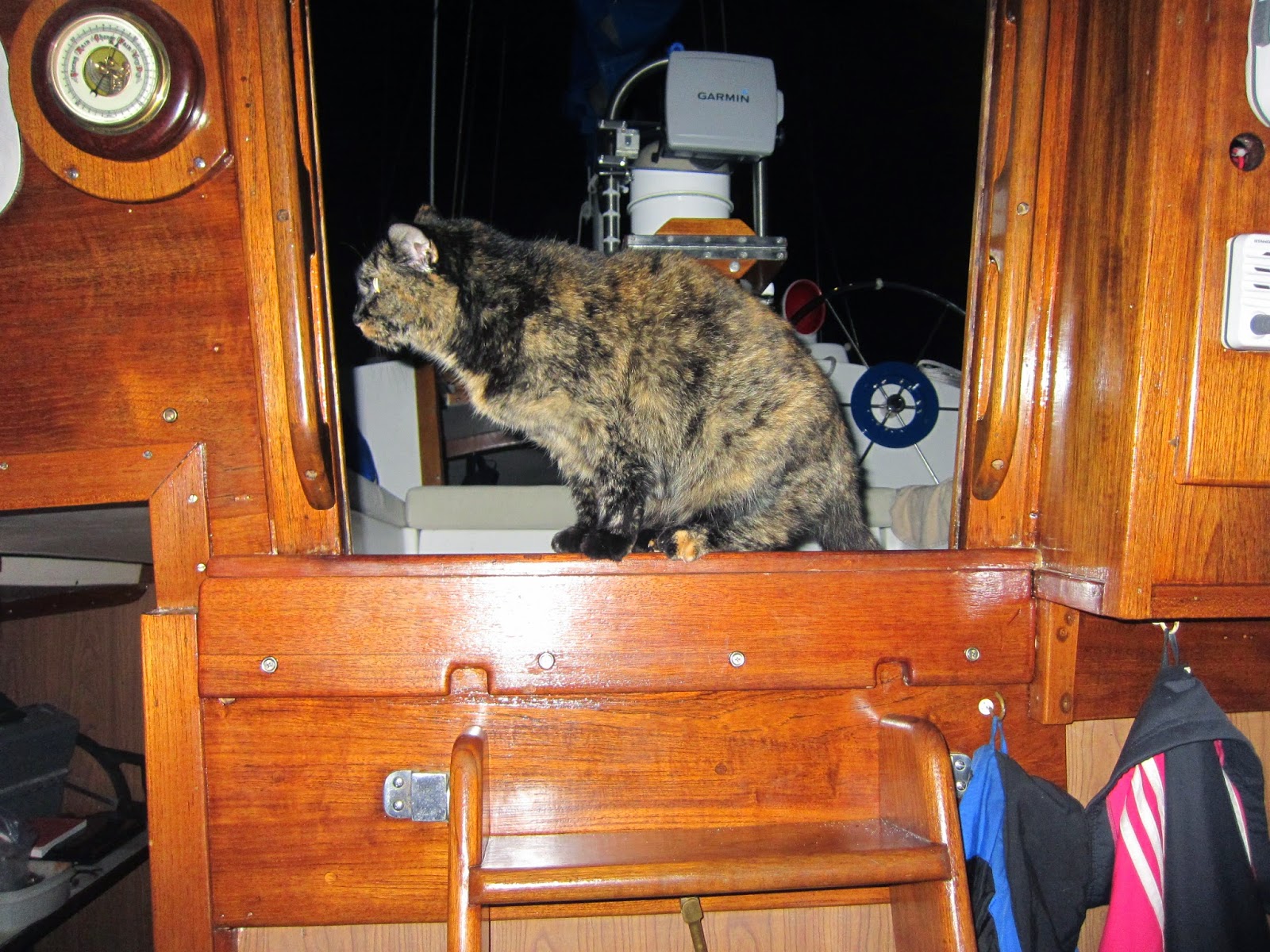 Molly sitting in the forward companion way on our boat. 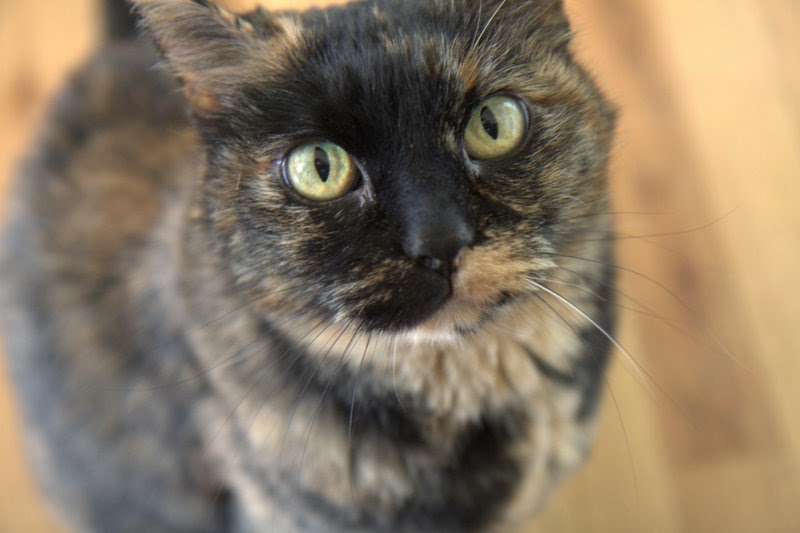 Rest in peace my beloved Molly

Amongst the Christmas cheer, illnesses and loss of Molly, the Saturday before Christmas a small kitten ran up to me on two separate occasions while walking outside. For the next three days this little baby starred in at us through the sliding glass door. Finally mom and I gave in and brought the little tyke in doors. She’s such a happy little girl. I brought her to Jenn’s house in Norton and found her a wonderful home. 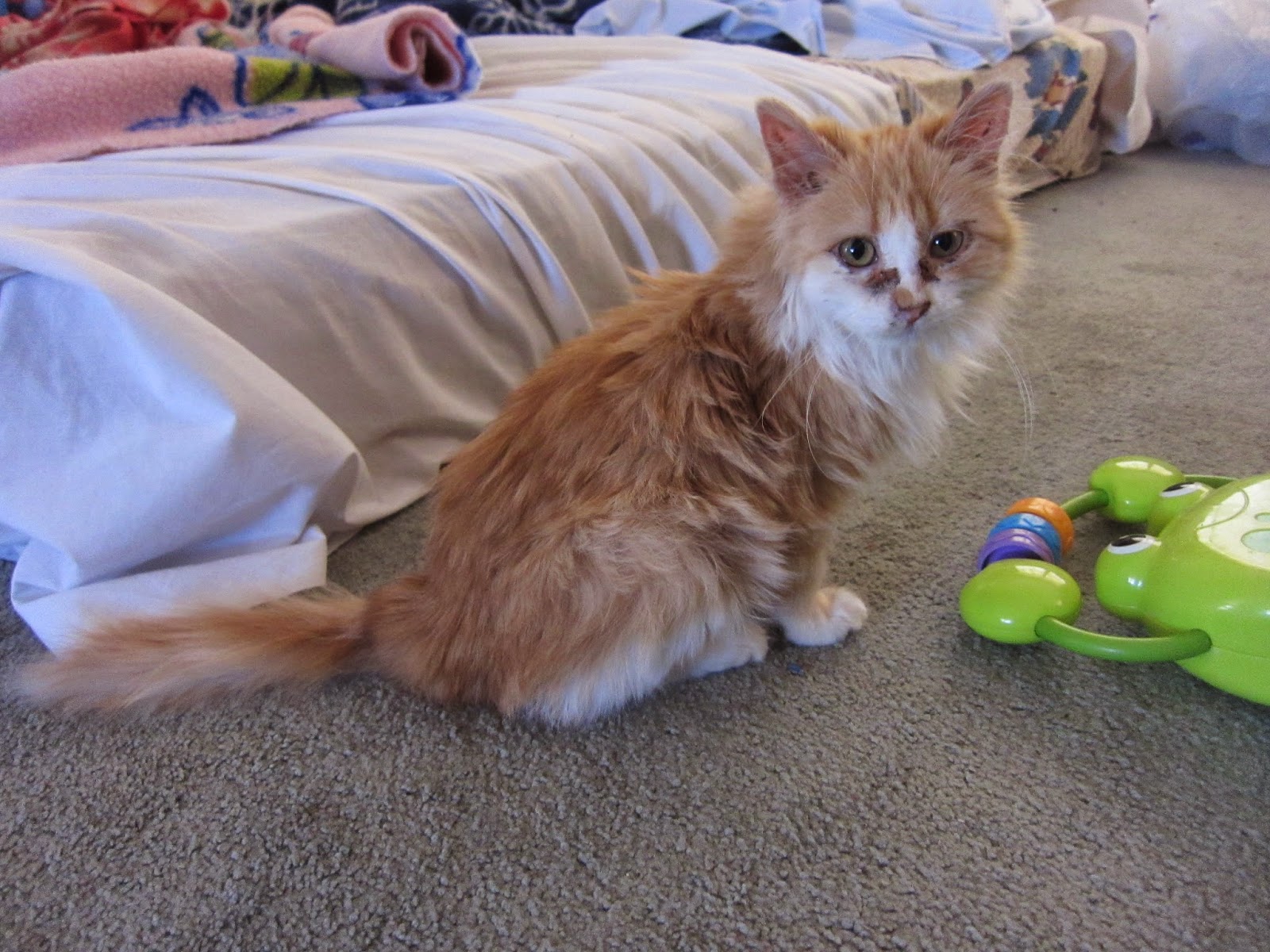 I was scheduled to fly to McAllen, Texas on Sunday, January 4th, but with my head cold I postponed it until I am well.
Jimi’s arrival to the Rio Dulce was delayed when one of his checked bags was lost in Mexico. It took a couple of days, but he finally received it intact. He arrived back to Sanbel and immediately began preparing for his departure from Guatemala. He is now in Roatan, the Bay Islands of Honduras keeping busy and doing well.

Between with two of us, we’ll keep you updated with our whereabouts and future plans.


Merry Christmas and Happy New Year to all!
Posted by Lorie Nicolaus at 2:37 PM