Okay – so, I promised I would write weekly  (as long as we have internet) and it’s been two weeks since I’ve written. I just don’t know where the time has gone. I last told you we were in Key West. We left Key West on March 21st.  As forecasted, the winds were good and we were moving along, however, about midday the wind died. We were just about to give up and anchor for the night when it came back around and was smooth sailing the rest of the way. Using a spot light to stay between the channel markers, we pulled into the anchorage about 9:30pm; we’ve been here since.

We are anchored in the anchorage just outside the mooring field. There are A LOT of boats here and it’s a tremendously busy place. The City Marina charges $22 a day to park a dinghy – WOWSER - that’s expensive. And to think we were complaining about paying $6 in Key West. That will teach us to complain. The upside (if there is one) is included in the price are showers, access the laundry facilities at $6 a load (WOWSER again), a work room, a day room with TVs, internet, and books, and a pump out. Still at that price and we’ve only used the dinghy dock twice we have to make a day out it squeezing every service and moment possible. It makes for looong days.

We’ve made a couple of trips to the local grocery store. There’s a Kmart here (no Wal-Mart), but it is surprisingly small and our luck for finding what we need there has been nil. These stores are located down the channel past the mooring field. We found a small free dinghy dock to park. We walk about half a mile or so to the grocery store with our backpacks, water proof bags and rolling carts. Our first re-provisioning trip was a biggie. Remember my mentioning the fishermen wanting to trade beer for freshly caught fish? Guess what we stocked up on? 96 cans of Miller Lite to trade and 48 cans of Yuengling to drink. We also purchased a pile of non-perishables. After checkout and while loading our bags and cart, the thought occurred to us that we may have bitten off more than we could chew.…ooops. I don’t know how we did it, but we did. We got a lot of attention huffing down the side of the road (no side walks) loaded to the gills with beer and other groceries. It was quite comical and I wished I had had my camera.

Jimi ordered parts for the wind generator, but he’ll work on fixing it later. He couldn’t find the same blades, so he purchased a different brand of blades and a new hub. His plan is to modify what we already have with the new parts to make the wind generator work. This seems to be the common thing for budget minded sailors.
We spent a week of our two weeks here stuck on Sanibel. We’ve had a tiny hole in our dinghy that Jimi decided to patch during our down time. We’ve been unable to find a hypalon patch kit, so Jimi made his own with 5200. The downside is 5200 takes a week to cure which left us with no transportation to shore. We kept busy and got through it though. 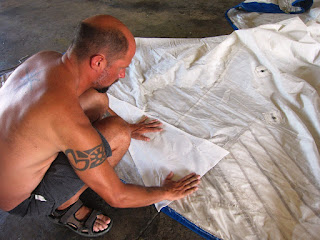 With a couple of tears in our genoa, we had to take the sewing machine to the work room at the City Marina to repair it. Even though the genoa is my favorite sail, repairing it is not. Skipping the unpleasant details I’ll just say it’s repaired.….until next time.
I made friends with a Manatee at the marina. As he was swimming past the dinghy, I reached in to the water to pet him……ohhhh……he liked that. We stayed around for nearly ten minutes while I scratched his back, neck and nose. He rolled over wanting scratches on his chin and belly too; he was so cute with his large flippers in the air. Even though he was so big, he was gentle and sweet. I asked Jimi to grab my camera out of my bag, but it was buried and he didn’t. I wished I could have stayed longer to play, but we had to go. L
We (Jimi) finally made a video of the inside of Saniibel. Many of you saw her during her refit and you’ve seen still pictures as well, however, this will give you a mental picture her today. And hopefully it will answer some of your questions regarding our systems, etc. Here is the link to the video:  http://youtu.be/EDtxoJS41R4

I’ve also included a picture of a girl who caught a wild iguana at the marina and carried it around most of the day. He was an interesting thing. They run wild here and we’ve seen several of them. 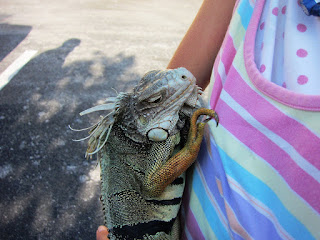 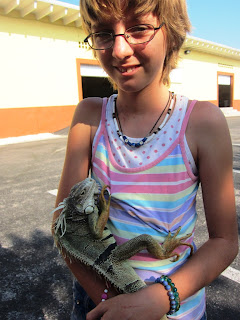 Last night we were invited to a couple’s sailboat who we met at the marina office, Tom and Colleen on Unplugged, for happy hour. We had a great time and may be sailing with them in the future, but nothing has been decided yet. One thing a sailor can count on is making friends easily. The network is incredible and the people are pleasant…maybe starved for attention, I don’t know. When we first arrived here we stopped by the guy’s boat that Jimi recognized from Key West (the boat that is, not the guy), the next thing we knew we were in his cockpit having a few beers. We told him a couple of times that we needed to get going, but he wasn’t having any of it. We enjoyed ourselves. There’s another gentleman that stops by our boat regularly for a chat. It’s a nice feeling to have such friendly folk around all with a common lifestyle and interest.

Yesterday it looked as though we would be leaving for the Bahamas. We rushed around preparing for today’s departure until this morning when Jimi checked the weather and decided we better not go. We are expecting rain and high winds here tomorrow. The marina is reminding everyone to tie down their gas cans, coolers, etc. and take in all cushions. The weather on the Gulf Stream would be fierce, therefore, it looks like we may be stuck here a little longer. It could be as much as two weeks.