Our Georgetown experience was nearly uneventful aside from the last update when we spent the evening at the beach.  The weather would not permit us to take the dinghy out to explore the surrounding islands. We took advantage of the time to get caught up at the internet café, visit with fellow cruisers, do laundry and restock our pantry. Going anywhere in the dinghy was a sure way to get a salt water bath. That didn’t stop us from going to shore to do what we needed though. Drenched to the core we got things done and were ready to head out as soon as mother nature opened the window.

We visited our anchor neighbor, Mike, on a 52’ Cheoy Lee. Jimi asked me to make sure I mention Mike, because he has a full size, in working order, Harley Davidson in the aft cabin of his sailboat. The aft companionway opens large enough so he can roll the bike onto a Boston Whaler or skiff and then motors the skiff to shore. If he’s staying somewhere for a long period of time, the Harley supplies his transportation. We went below deck to inspect the bike and it was pretty unbelievable. Even though Jimi isn’t a fan of Harleys, I think I saw a bit of drool fall from his lips. He-he 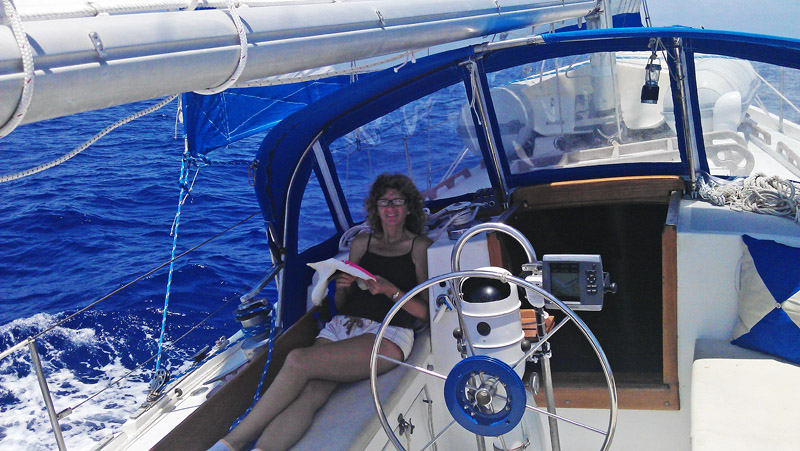 The morning we left, we said our goodbyes to friend, Randy. He is continuing his journey south, though, he is a little undecided on his exact destination. Hopefully, we’ll meet up with him again in the future.
From Georgetown we sailed twenty three nautical miles to the Northern tip of Long Island anchoring just before sunset. The following day was Friday, my birthday, and we thought we would spend the day sailing another fifty-six nautical miles south, however, mother nature had other plans for us. She sent the winds away, so we could stay. To my surprise, around the point, out of our view, was the Cape Santa Maria Beach Resort. Jimi snuck out in the morning by telling me he was going fishing – uh hu – when really he went to the beach resort to make dinner reservations for that evening. He bought me a beach resort t-shirt, which I clearly love, as I’ve worn it every day since J. 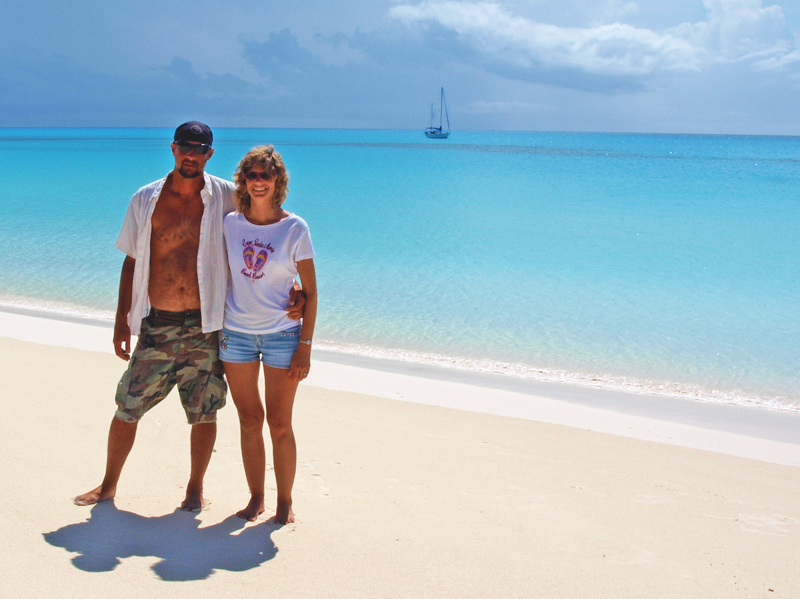 There is a private beach separate from the resort and anything else near where Sanibel was anchored. That afternoon we took the dinghy to ‘our’ beach for a long walk. This was one of the prettiest beaches we’ve seen yet. The sand was naturally clean and soft, as walking on a cloud of cotton. Since we hadn’t brought our bathing suits and we were the only ones anchored and in the area, Jimi suggested we go for a swim (nude) and seeing no harm in it, I agreed. We stripped our clothes neatly laying them on the rocks and sure enough as soon as we turned around to walk towards the ocean a large ship of some sort was coming around the corner. We quickly got in the water thinking the ship would pass on by. Ha – it anchored! Safe in the water we enjoyed our cool ocean swim on the warm sunny day. When we got out I ducked behind a rock to dress. To us the ship was the size of a small toy no larger than a few of my fingers, so it was doubtful they could see us even with binoculars, but the story is a fun one anyhow. 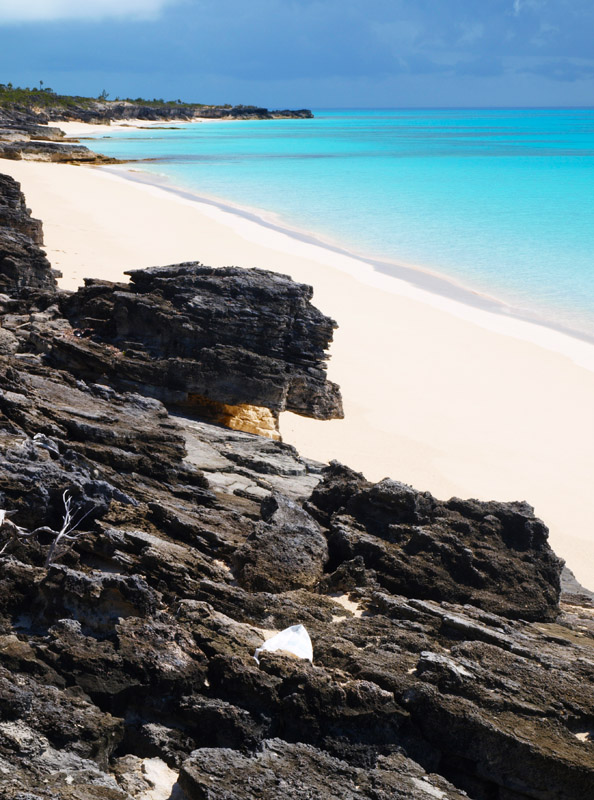 With 6pm reservations at the beach resort we arrived early for happy hour. Two tropical rum drinks with complimentary conch fritters in a beautifully structured light and airy resort was an ideal beginning to dinner. We ordered blackened grouper with an assortment of fresh steamed vegetables and rice with cilantro and a hint of  lime as well as shrimp fettuccini, two more tropical rum cocktails and a large piece of chocolate cake( to go). It was the best meal we’ve had in ‘forever’. The grand finale of our evening was being able to call Jennifer, Daniel, my mom and dad and my sister. The entire day was perfect with an even more perfect ending. 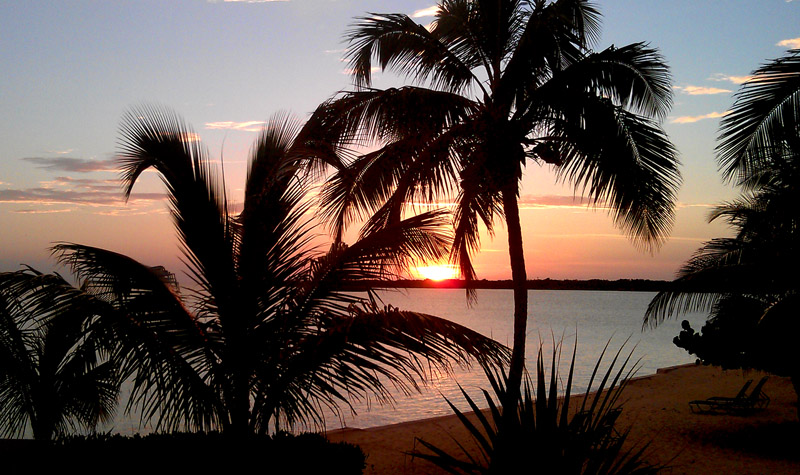 When I woke the next morning Jimi told me  we would be leaving at 7:30pm and sailing overnight. Needless to mention, we prepped for the passage. We made the fifty-six miles in twelve hours flat. Sailing on a lee shore, the seas were forceful. Jimi sent me off to bed to get some sleep and promised he would wake me to take over so he could sleep, but I never really slept and he never tried to wake me. The moon was fuller then full; a flashlight in the sky. Jimi does well during overnight passages; he finds them peaceful enjoying the night sky and air. We arrived in Little Harbor of Long Island at 7:30am.

We haven’t seen a soul: not any movement of cars or humans. There is a small power boat pulled up on shore and another boat wreck nearby, but otherwise it’s just us and the sea turtles (and one huge barracuda); we’ve seen many sea turtles playing in the water. The barracuda was quite curious as Jimi swam around. It would follow Jimi and every time Jimi would turn around it would stop, as if he were looking the other way and unnoticed. Finally Jimi growled at him underwater – well that did it – the barracuda quickly fled. Next time you are being stalked by a barracuda, turn around and growl at him and you’ll be fine. J Jimi plans to try this technique if a shark approaches; we’ll let you know how that turns out.

The weather has been overcast, with howling winds and sporadic rainstorms. We’re hanging out here until everything passes. Weather reports currently whisper we should be able to leave this weekend. Maybe or maybe not – weather changes so quickly. In the mean time, we are enjoying secluded serenity. No hustle bustle, no waves to flight going to shore and no place we have to be. This time has given Jimi a real chance to do some word working along with other projects and I have projects to do as well. The rain storms upon us seem like the perfect opportunity to seek out and fix leaks. If you think the inside of a sailboat is always dry, you would be mistaken. We always have water intrusion from somewhere and the aft companion way has been a huge area of concern from the beginning. After the first spout yesterday morning, I put a few things outside awaiting the next spout for a good cleansing, but since Jimi fixed the leak in the aft companion way, it hasn’t rained. It’s clearly his fault for fixing it. Lol We’ve realized that we will need to close the thru hull to the forward head during forward passages. When we are on a Starboard tack, water flows through the head’s thru hull and infiltrates the vanity and surrounding areas. Ooops. This equals a mess in the forward cabin.

Back in Georgetown, Jimi bought a 1GB data card for the Bahamas area from Batelco (the Bahamian Telephone Company), which goes in his phone. The purpose was solely to download weather updates for our passages. Being that between here and Jamaica we wouldn’t have access to such services, we thought it necessary.  As well, we only have thirty days to use the 1GB. Now realizing that there is no way the weather info will consume all or even half of the 1GB, he is allowing me to check my emails and Facebook from time to time, and even send you this update. This makes me one happy camper bahama-mama! I can only use this service on the phone and not on my laptop. Surfing the internet and uploading or watching videos are strictly prohibited and pictures are limited. Hey – I’m o.k. with that. I’ll take what I can get.

‘Sailor Molly’ is what we call her now. She’s been hanging out in the cockpit when we pull anchor and motor away. She really surprised Jimi when she stayed in the cockpit while he was sailing - heeled over and even tacking. She’s gotten sea sick the past couple of trips, but otherwise is feeling more than comfortable with this entire idea.

Today I am baking a loaf of raisin bread and a loaf of white bread. We are expecting more severe storms in the next day or so. We won’t be going ashore to explore the islands anytime soon.

We love your emails – keep them coming. 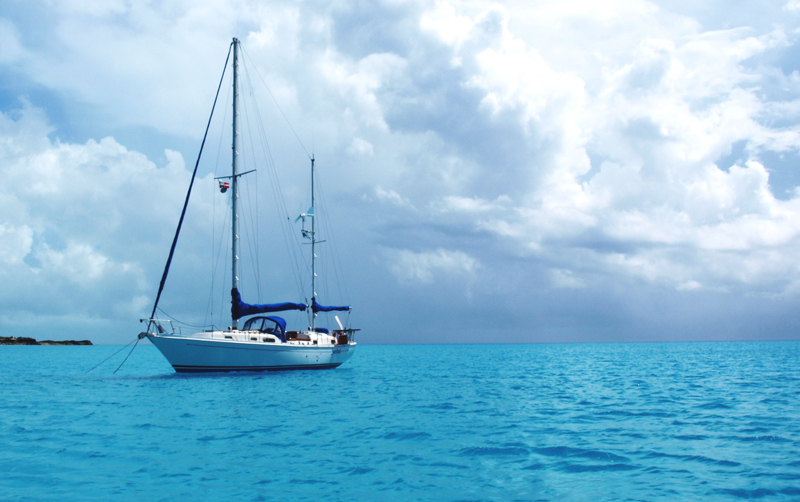 Posted by Lorie Nicolaus at 1:48 PM