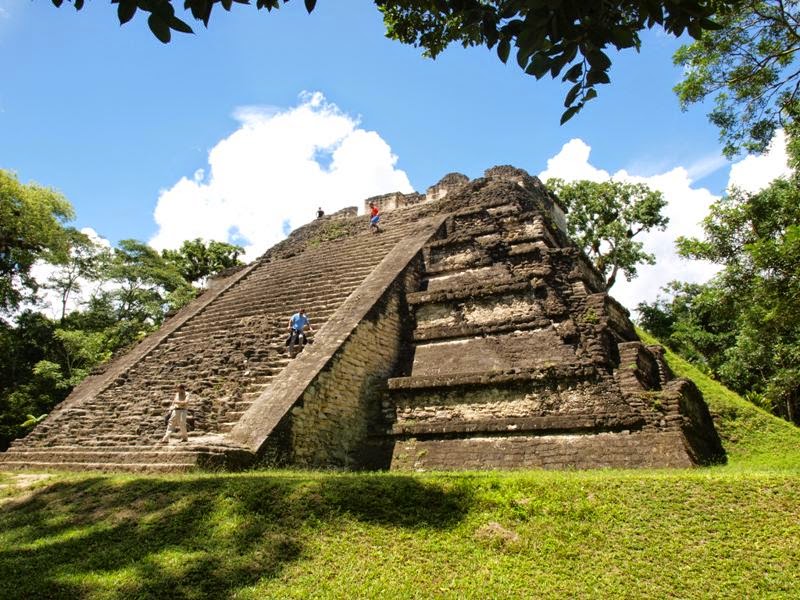 Monday, September 8th we left Rio Dulce on a bus just after twelve p.m.; our destination was the ruins of Tikal, Guatemala. The nearly four hour bus ride was uneventful. In fact, it was more than we needed with first class seats and air conditioning.  When we arrived in the town of Santa Elena, we took a tut-tut to the bus terminal. Our plan was to take a collectivo to Tikal, but we were told the last one had left at 2:30 p.m. and we’d missed it. We had to take a taxi the last 40 kilometers. Transportation to get from the Rio Dulce should have cost us $30, but with unexpected changes to a first class bus and having to take the taxi, we spent $74. It just seemed we were forking over cash at every turn and the  start of our ‘get away’ wasn’t going well.

Upon arriving at our hotel, we were pleasantly surprised with the grounds and the staff and just relieved to settle in for the night. We shared a meal at the hotel restaurant and retired to our room.
Jimi left at 5:30 a.m. the next morning hoping to get in to the park early for a sunrise photo of the pyramids, but the gate keeper did not want to let him in before the park opened at 6 a.m. Finally the gate keeper gave in and let Jimi enter at 5:55am. He captured some great photos, which he put together into a time lapse.

Copy and paste this address into your browser to watch the video:

After a few hours, Jimi came back to the room to get me. We walked all over the property taking photos of all kinds of things. The pyramids are such amazing structures. I can’t image the Mayans building them with only the strength of their arms.  The grounds are quite spread out, therefore, it’s most certainly an all day event.  Besides the pyramids, we saw many howler monkeys, agouti, kota mundi and trails of worker ants carrying leaves to their casas.

Here’s a little history of the Tikal ruins taken from Kiwix.

Tikal has been partially restored by the University of Pennsylvania and the government of Guatemala.  It was one of the largest of the Classic period Maya cities and was one of the largest cities in the Americas. The architecture of the ancient city is built from limestone and includes the remains of temples that tower over 70 metres (230 ft) high, large royal palaces, in addition to a number of smaller pyramids, palaces, residences, administrative buildings, platforms and inscribed stone monuments. There is even a building which seemed to have been a jail, originally with wooden bars across the windows and doors. There are also seven courts for playing the Mesoamerican ballgame, including a set of 3 in the Seven Temples Plaza, a unique feature in Mesoamerica.
Though monumental architecture at the site dates back as far as the 4th century BC, Tikal reached its apogee during the Classic Period, ca. 200 to 900 AD. During this time, the city dominated much of the Maya region politically, economically, and militarily, while interacting with areas throughout Mesoamerica such as the great metropolis of Teotihuacan in the distant Valley of Mexico. There is evidence that Tikal was conquered by Teotihuacan in the 4th century AD. Following the end of the Late Classic Period, no new major monuments were built at Tikal and there is evidence that elite palaces were burned. These events were coupled with a gradual population decline, culminating with the site’s abandonment by the end of the 10th century. 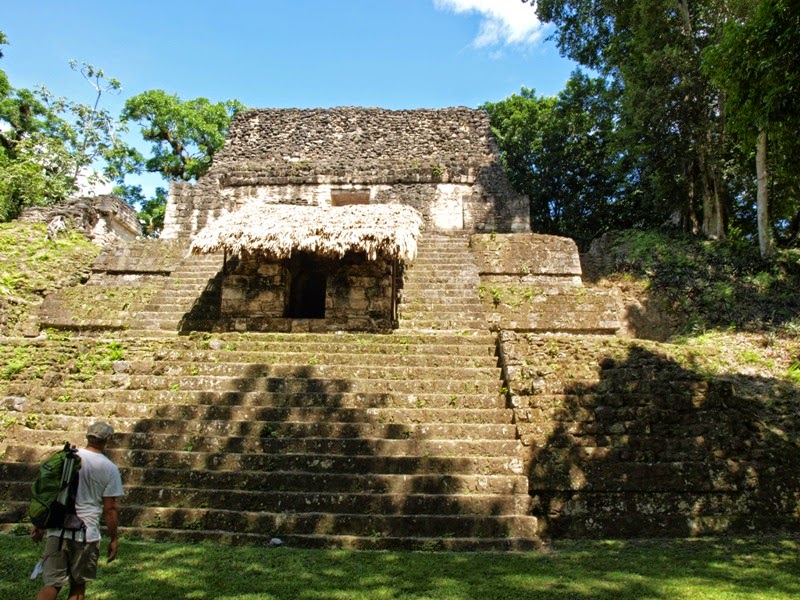 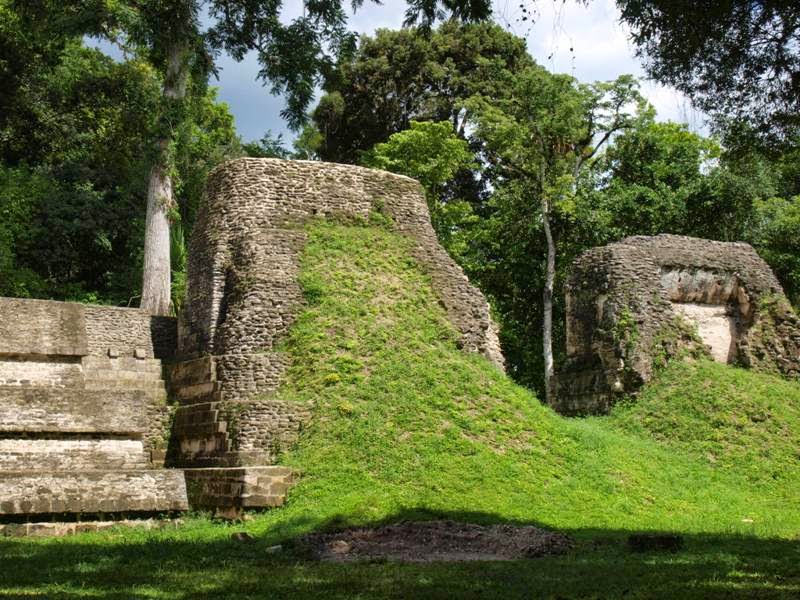 This pyramid has not been fully excavated. 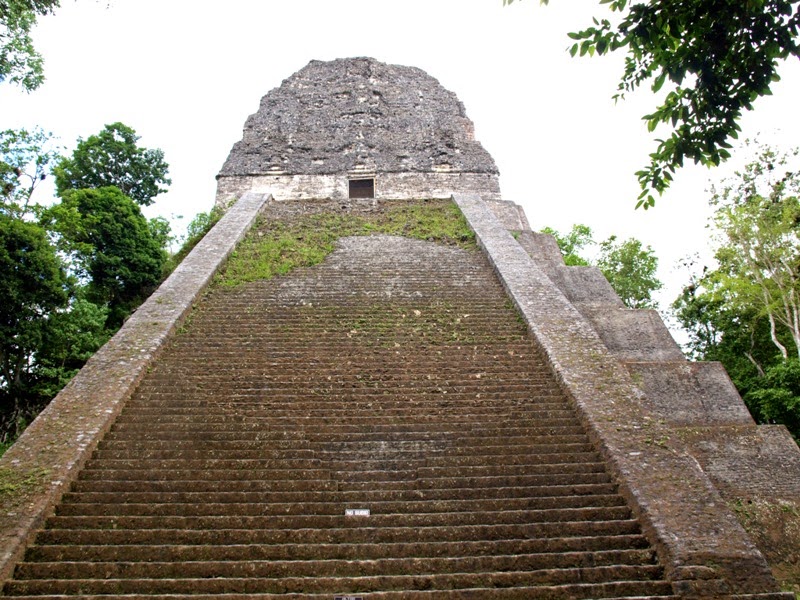 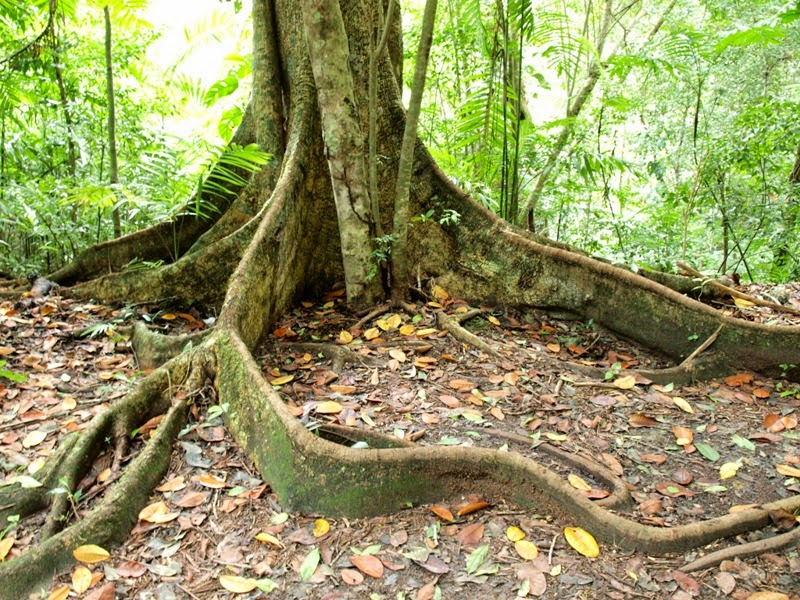 The root of this tree followed the path at least twenty feet in several directions. 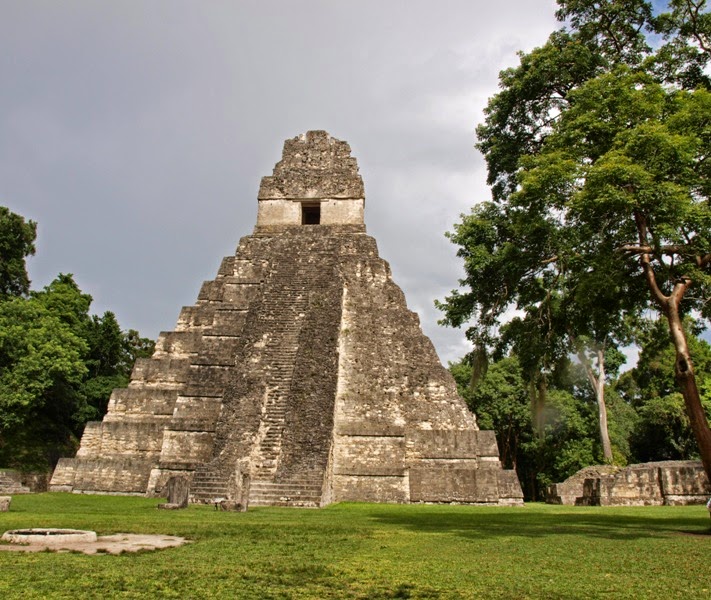 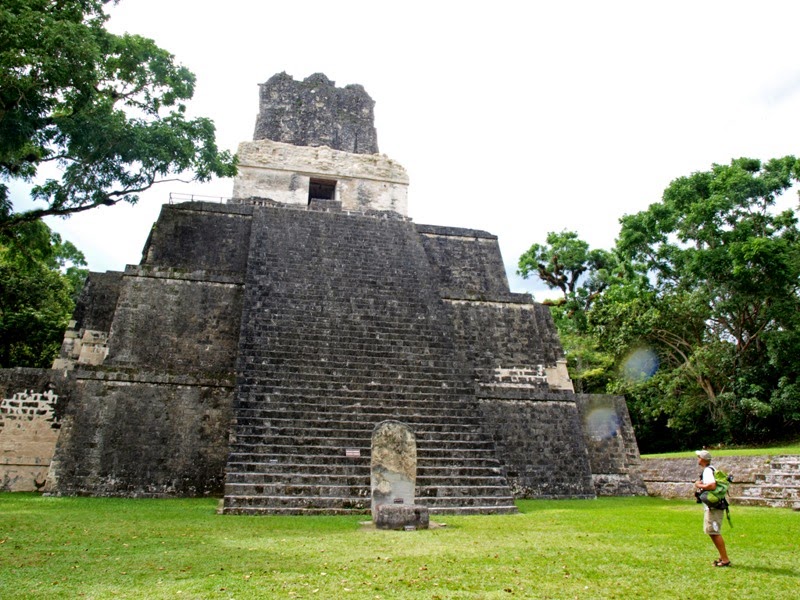 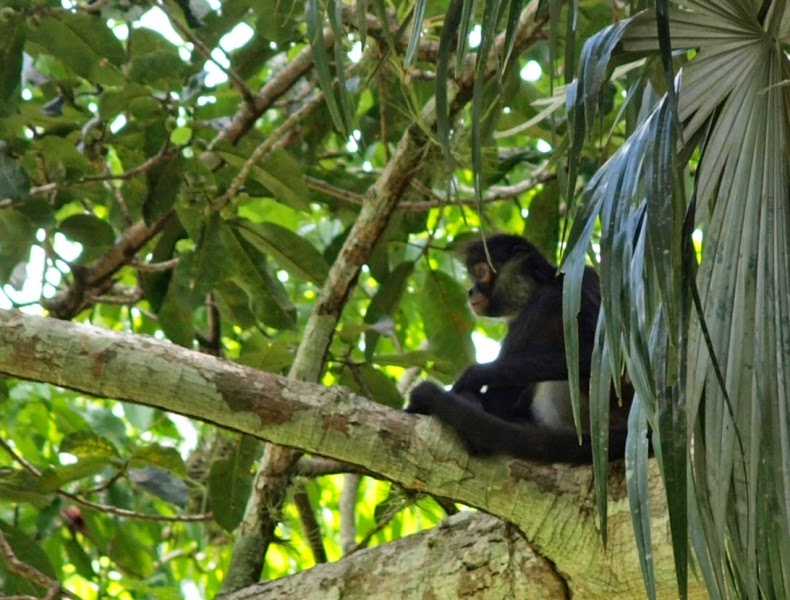 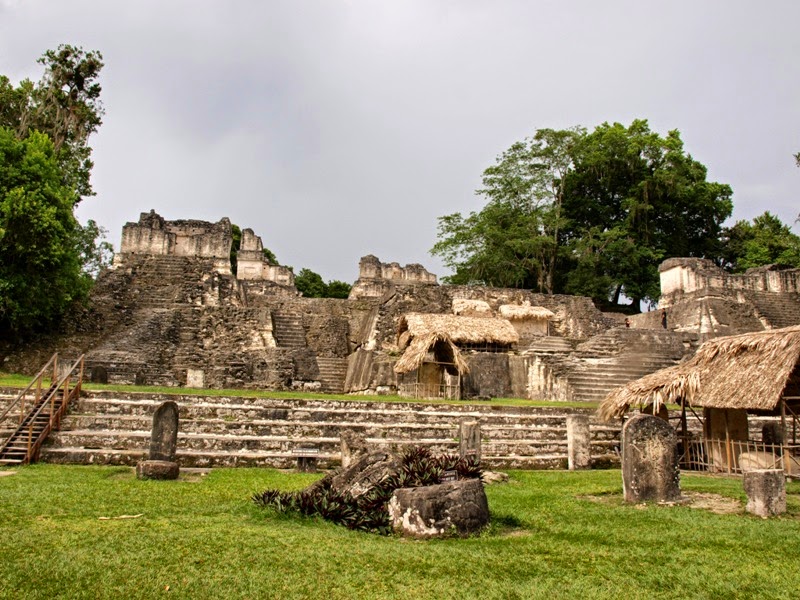 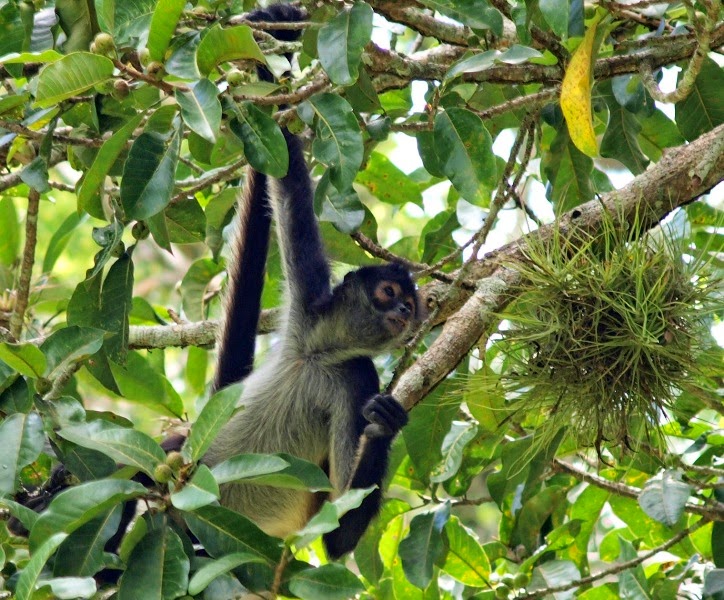 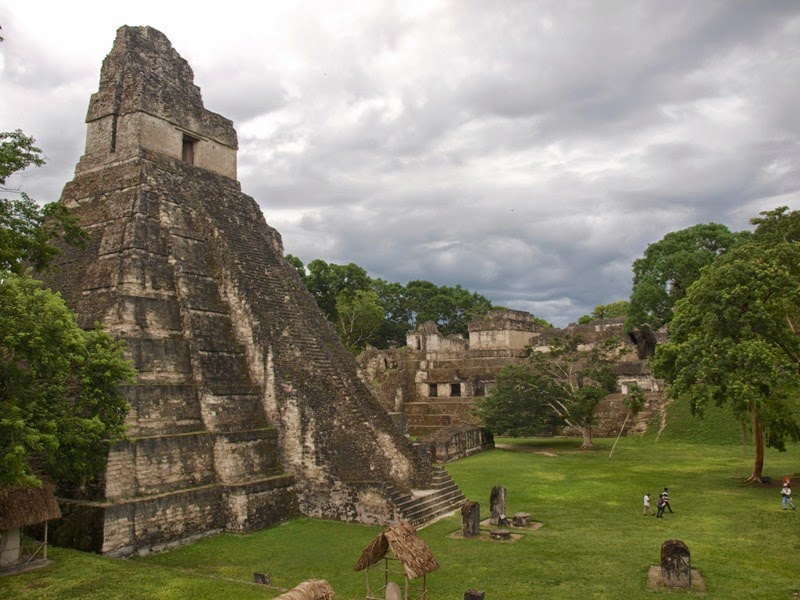 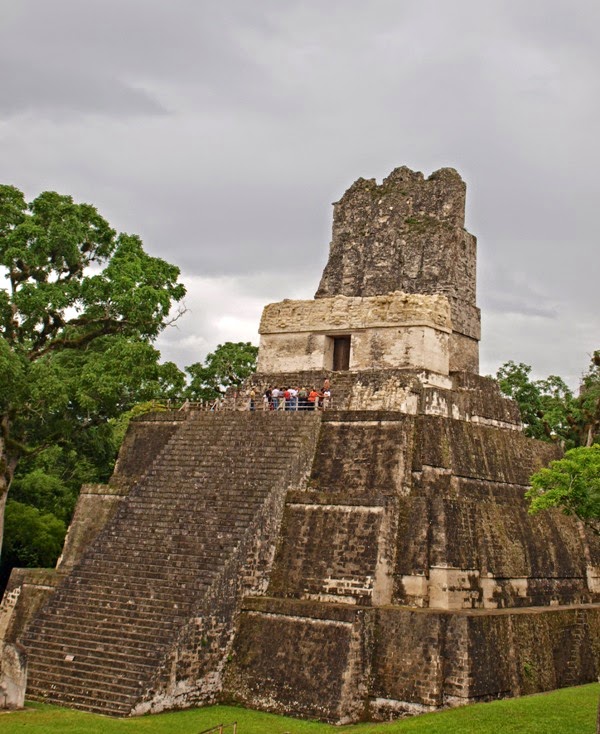 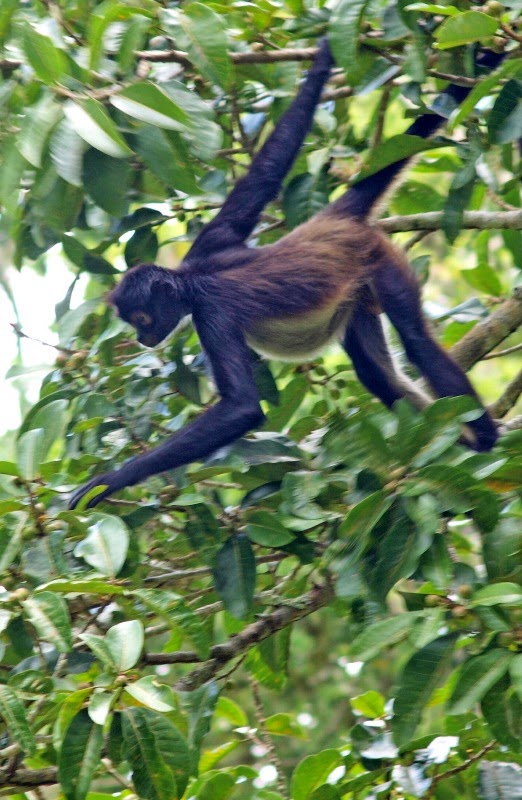 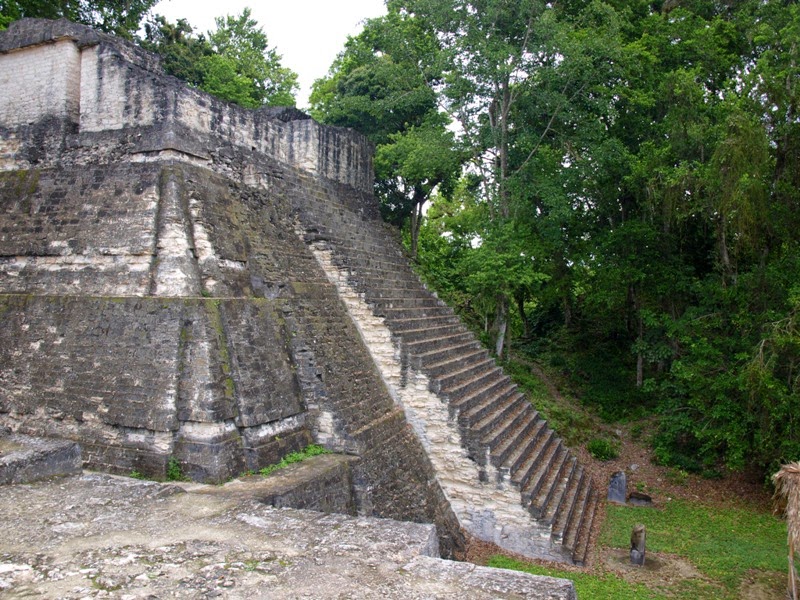 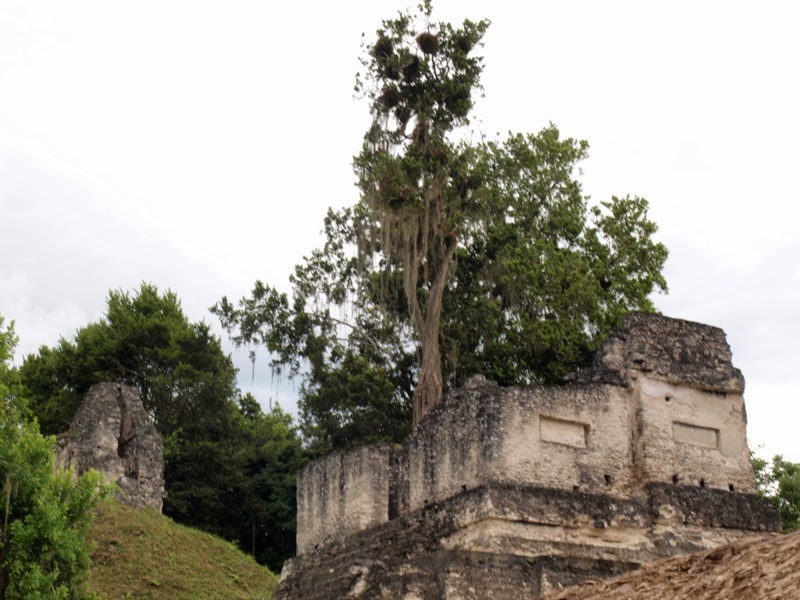 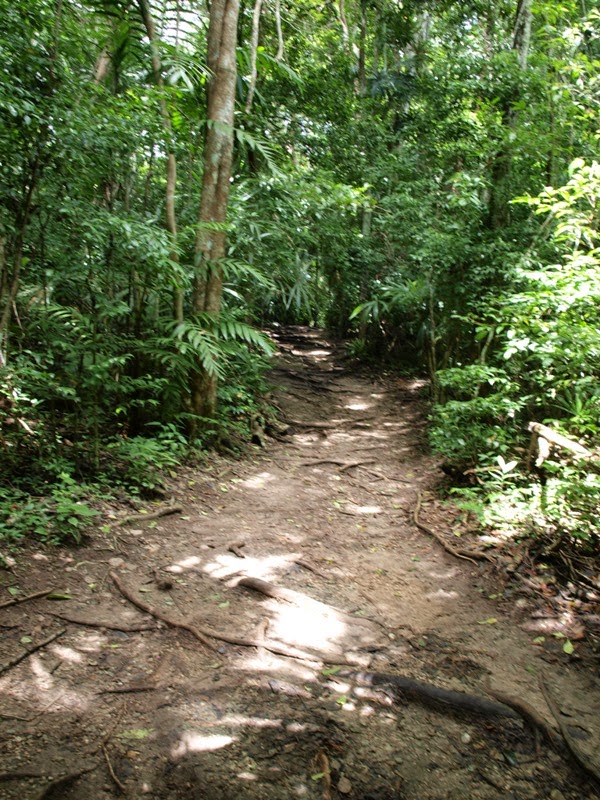 One of the paths. 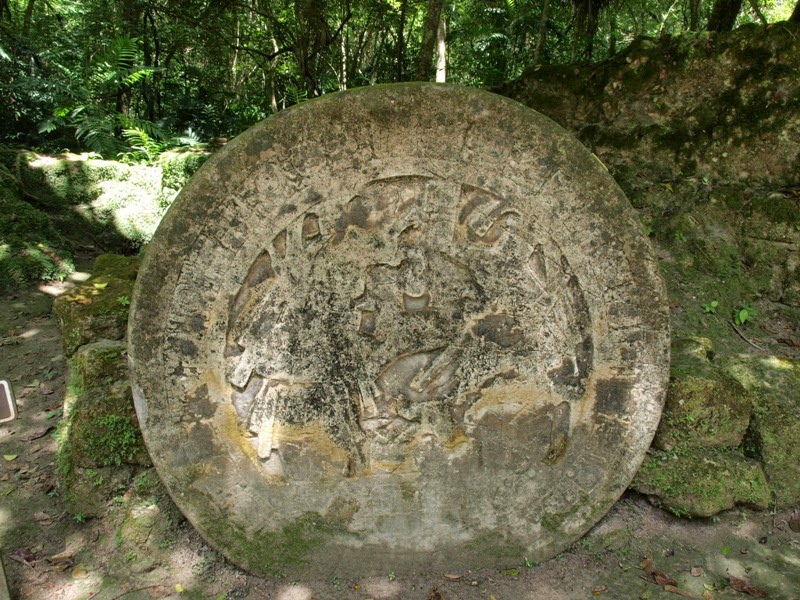 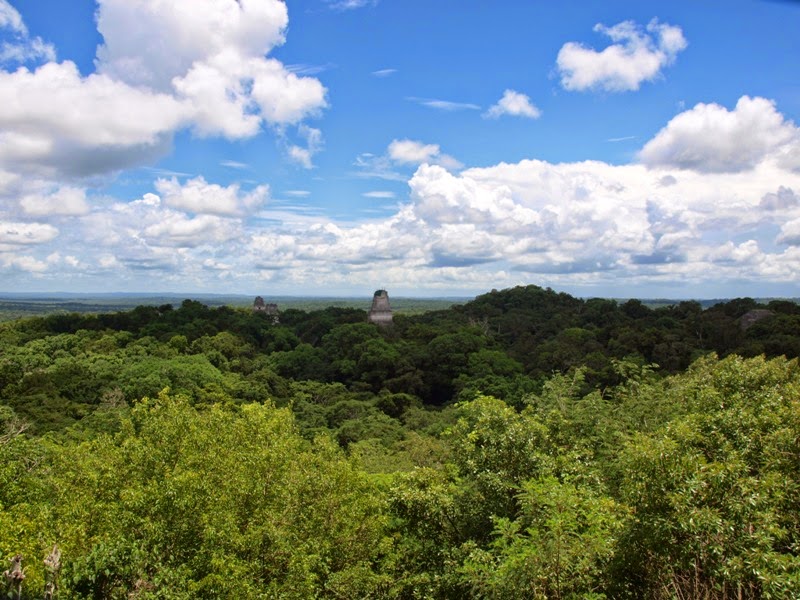 Standing on top of a pyramid, we could see at least four others peeking over the trees. 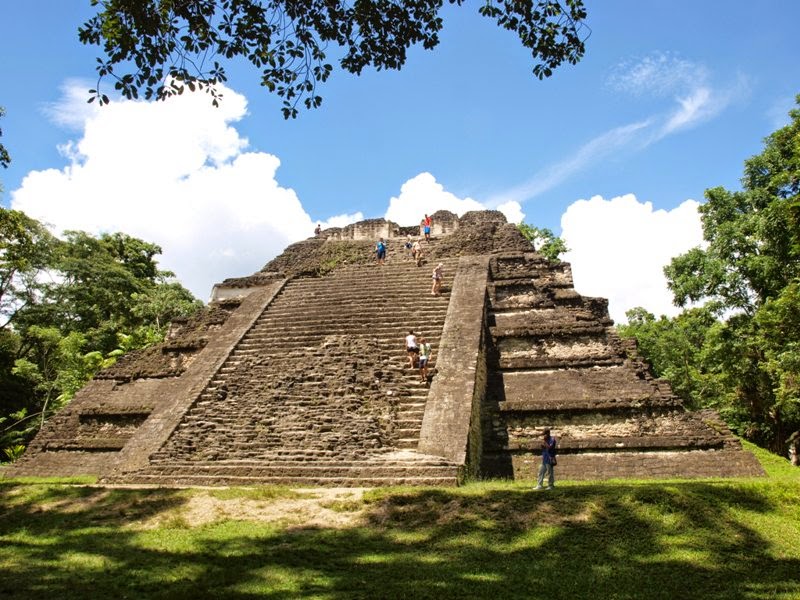 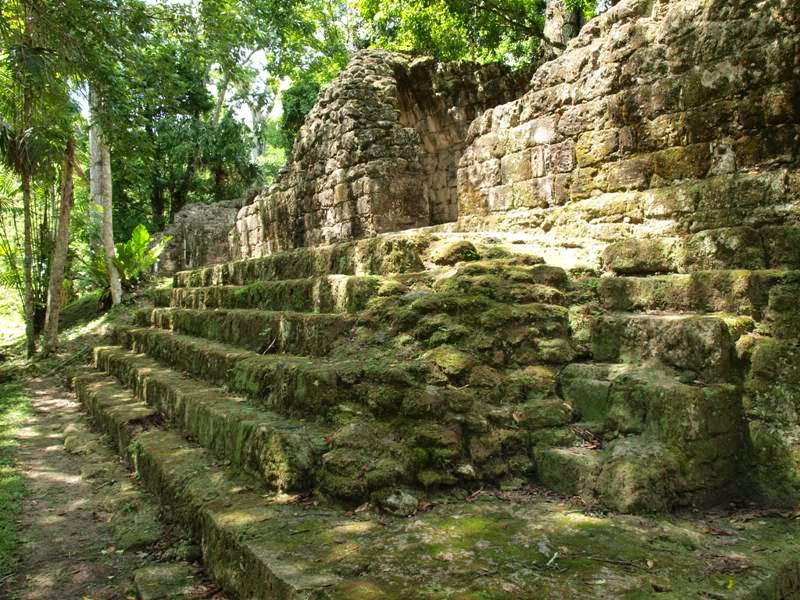 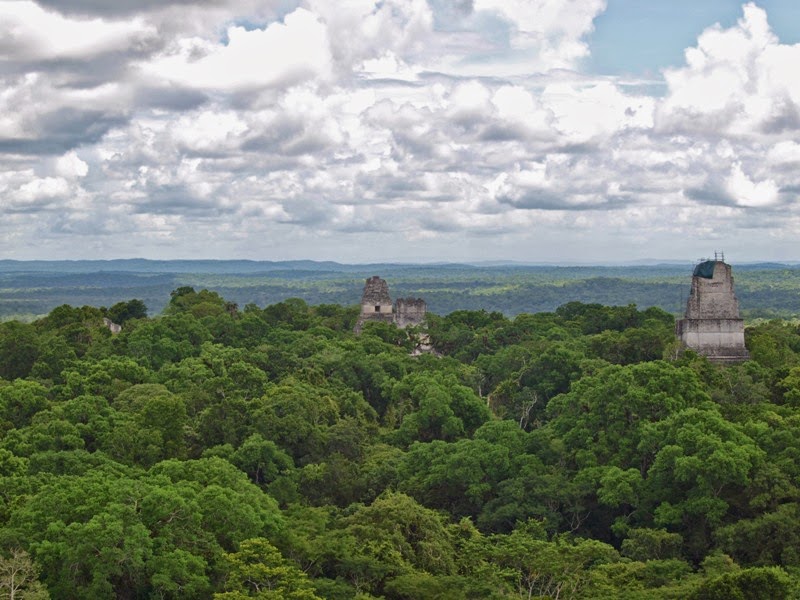 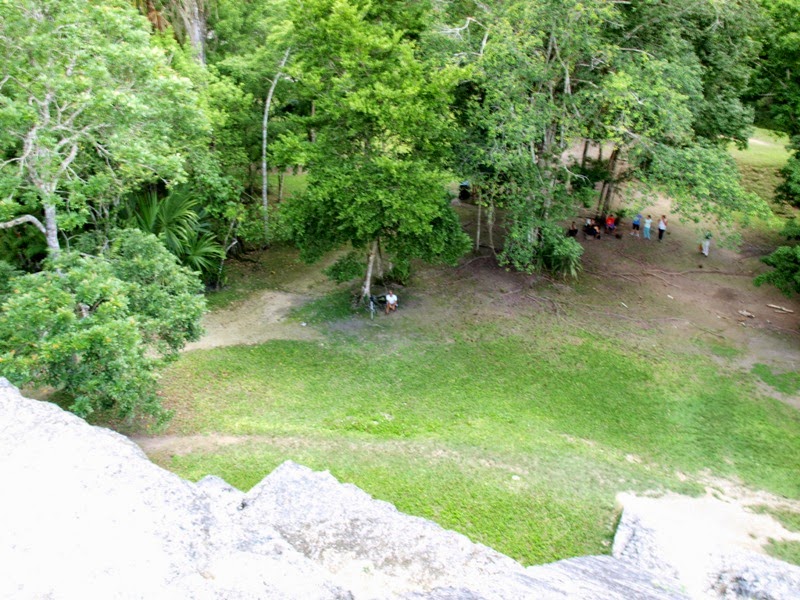 I'm standing on top of the pyramid. Jimi is below taking his own pictures. He's the one in the white shirt centering the photo. 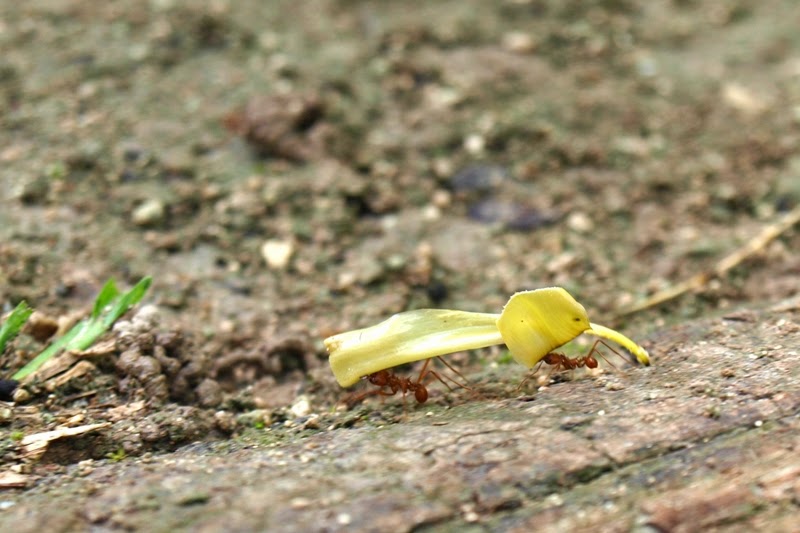 I could have spent the entire day taking photographs of the ants diligently working. But, we were there to see the ancient pyramids of the Mayan people. 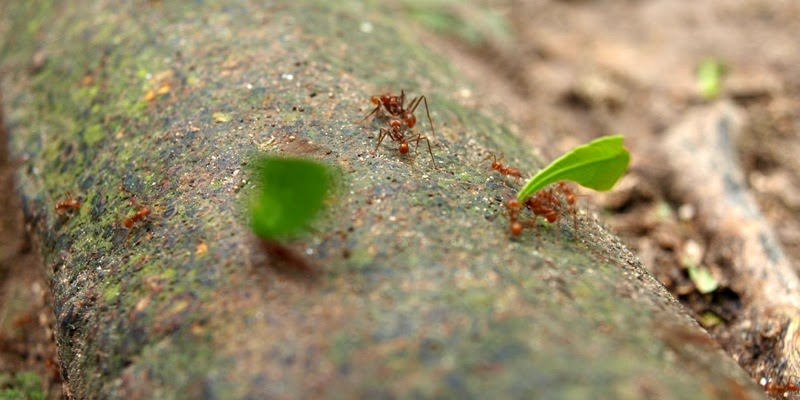 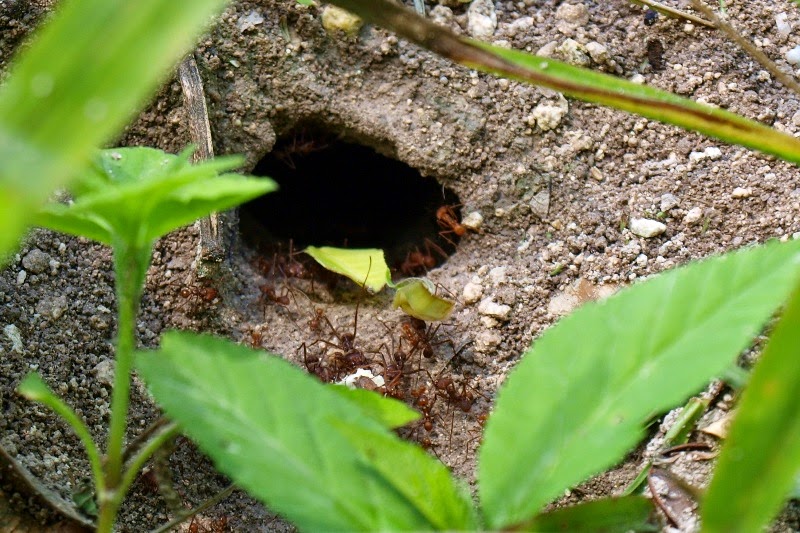 Posted by Lorie Nicolaus at 8:51 PM