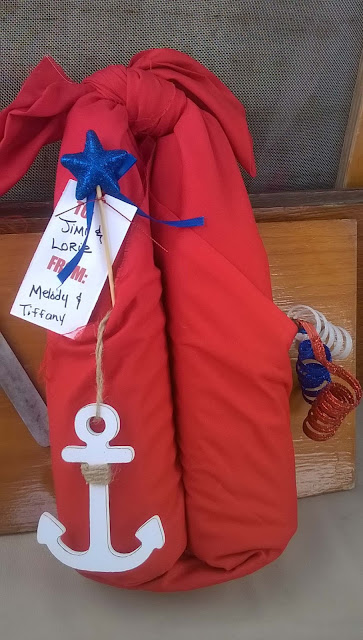 A gift from our guests: a bottle of rum and wine.

The last of our scheduled guests have come and gone. My long time friend, Melody and her oldest daughter, Tiffany came from Colorado to sample our lifestyle. They arrived late afternoon on Thursday June 25th.

After giving the Sanibel and marina tours, we walked over to the Salvador Dali Art Museum. We just couldn’t pass up the Thursday night special price of $10 admission versus the normal rate of $24.00.  The art was something to be studied and much of it we barely understood. Jimi quite enjoyed it the most, but our friend, Bob, said it best “I’m standing there staring at one of his pieces and trying to get in his head.” We laughed. Jimi posing with Dali...did he get the eyes right? 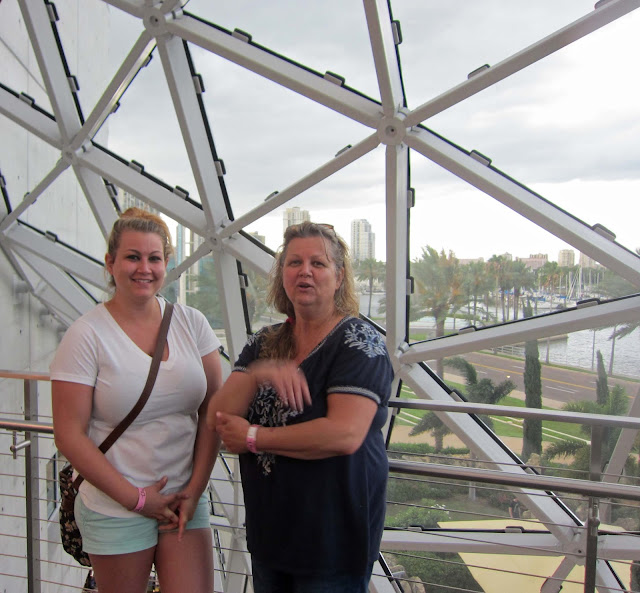 Tiffany and Melody at the Dali. 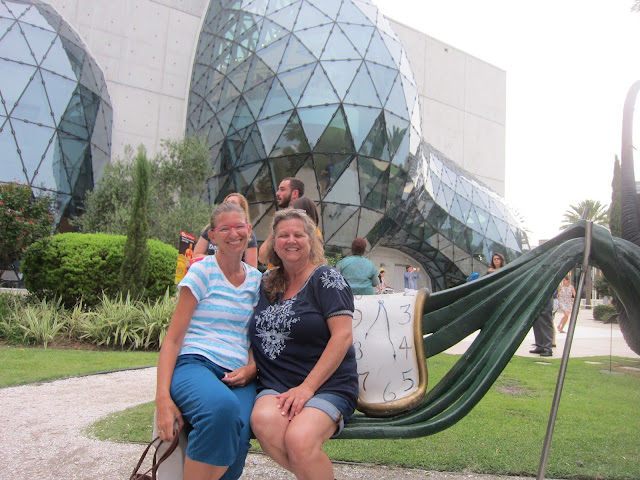 Lorie and Melody next to one of Dali's famous melting clocks.

Friday we did the usual morning rituals of coffee, showers and people watching. We took a walk or two around downtown St Pete and sprung for a coffee at the high class Vinoy Renaissance Hotel. Friday evening we took the girls and Bob to our favorite Chief’s Creole Café. After dinner we met up with Eric & Sandrine and Jenn & Nate for our debut shuffleboard experience. Alternating teams, we played for several hours, but the final game was epic. Jimi and Eric on a team against Sandrine and myself. The boys were winning throughout most of the game, but we girls held our own. Just as the court attendant told us to wrap things up for the night, the boys lost ten points putting  the girls in the lead. After holding our spot for several rounds, we were on the come back and again we scored . The score now boys 73 and girls 74, and we were the last team on our section of the court. Cheering from our fellow boaters and guests soared without cease and everyone was rooting for the girls. Yes, we can do this…or so we had hoped. We were in the lead by one point…then the boys team scored.  Arghhhh – they reached 75 points first, which made them the champions. However, the girls played a mean game. Sandrine and I consider ourselves the real winners here. 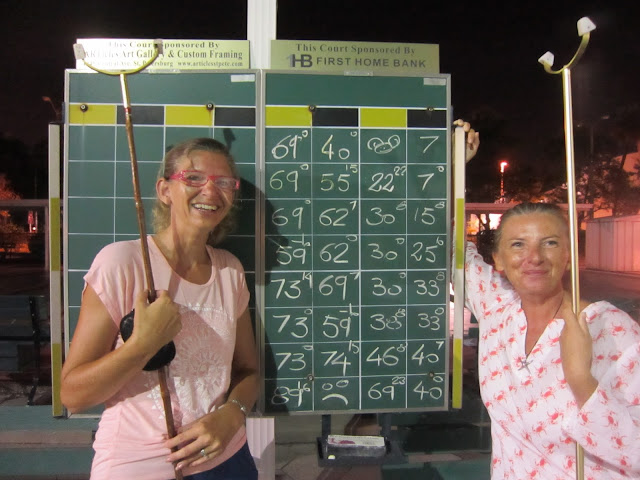 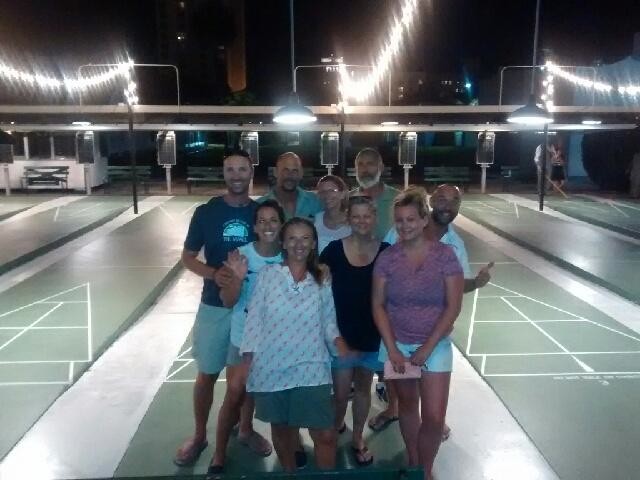 Saturday was relaxing as we sailed around Tampa Bay. We didn’t have much wind, but there was just enough to push us along.

Jingle invited us over for dinner Saturday evening. Sandrine made her first ever American hamburgers. We spent hours talking and laughing. And actually stayed out a little later than we’d expected, as we had an early morning ahead. We left Sanibel at 4:30am to get Tiffany to the Tampa airport on time. She was flying home to Denver. After melody and I dropped her off at the airport, we found a Denny’s for coffee, breakfast and girl time.

Melody left just before lunch. We sure enjoyed having both of them visit and hope they will come back again someday.

Jimi and I had planned to attend shuffleboard again on Friday, but mother nature put her foot down and said “No”. We did nothing.

We’re very pleased with the outcome of our Independence Day celebrations. We invited Eric & Sandrine, Nate & Jenn and Bob on Sanibel for a celebratory traditional BBQ with hamburgers, hot dogs, potato salad, chips, beer and country music. All seven of us squeezed in the cockpit and ate, ate, ate. We toasted one tequila shot in our mini red solo cups and played Toby Keith’s song, Red Solo Cup.

Around  8pm we relocated to Jingle to watch the fireworks, which were set off on East of the basin. We were literally under the amazing colorful sparkles of light in the sky, so much so that Jingle was covered with fallout of debris and ash.
Happy fourth of July celebrating our independence and freedom to all. 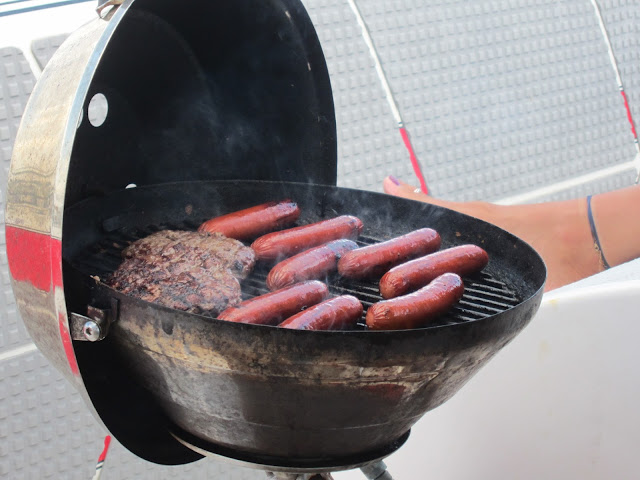 Jimi's rendition of an American flag made form a hamburger and hot dogs on the grill. 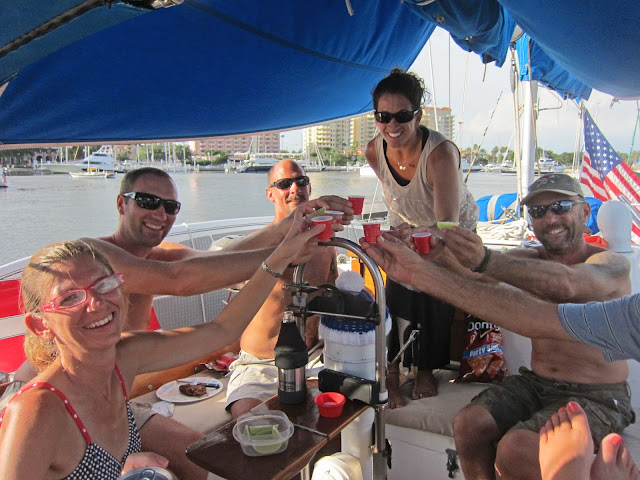 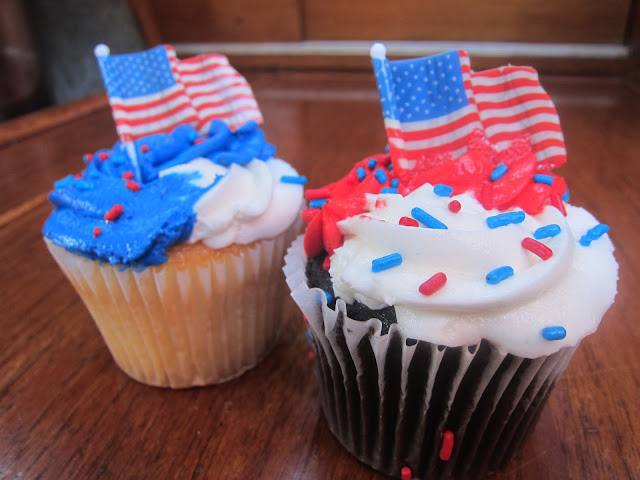 Cupcakes provided by Sandrine and Eric. 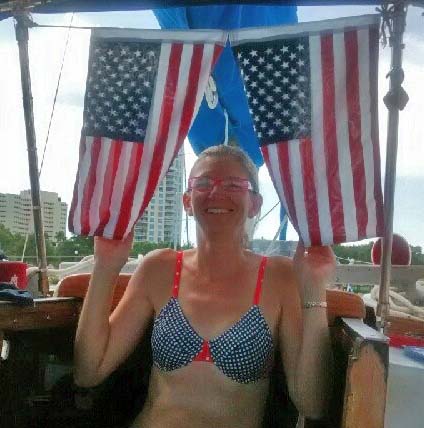 Our time in St Pete is quickly coming to an end. Jimi and I will leave the area within the next few days. We’ll go South to the Punta Gorda and Port Charlotte areas; the place we started out with Sanibel. As soon as we get her settled on dry dock, we’ll hit the road for our rediscover America tour.
Posted by Lorie Nicolaus at 5:13 AM