Pros, cons and everything in between

It’s been twelve days since we left St Petersburg. We sailed, motor sailed and sometimes just motored to get to Englewood, Fl.  We anchored each night relishing in what it was like to be at anchor in the ocean with a cool sea breeze and no neighbors. There’s pros and cons to nearly every situation and where Sanibel parks is no different. We love being out in the wide open spaces – free to do whatever we want without the worry of anyone else around. The cool breeze was a welcome relief from the basin at the marina. We spent three days to get to our destination, but took another day just hanging out  to enjoy what we missed. 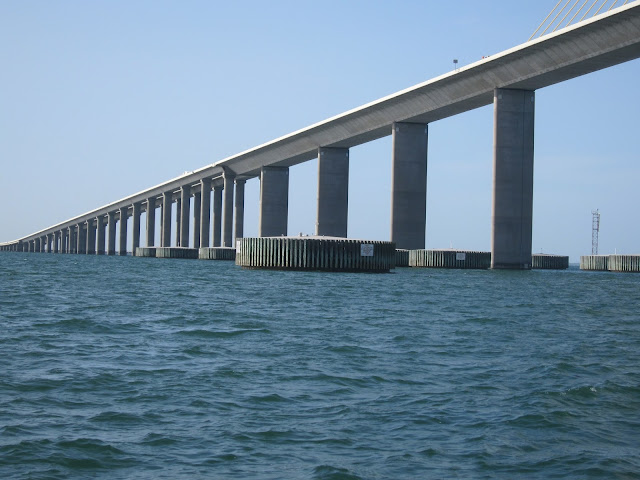 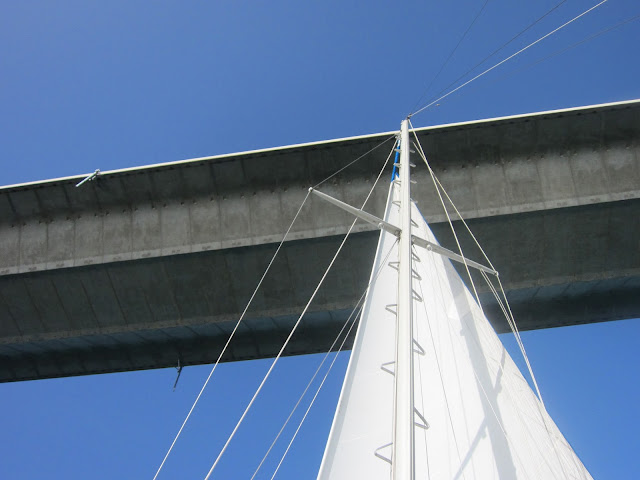 Monday morning we motored through the lock, which separates the salt water from the fresh water, to get to the boat yard. The process went well, maybe better than ever before, although it can be tricky. As we approached the channel we were escorted by a dozen (or more) dolphins: from a baby sticking close to its mama to a large protecting papa and many more of all sizes. 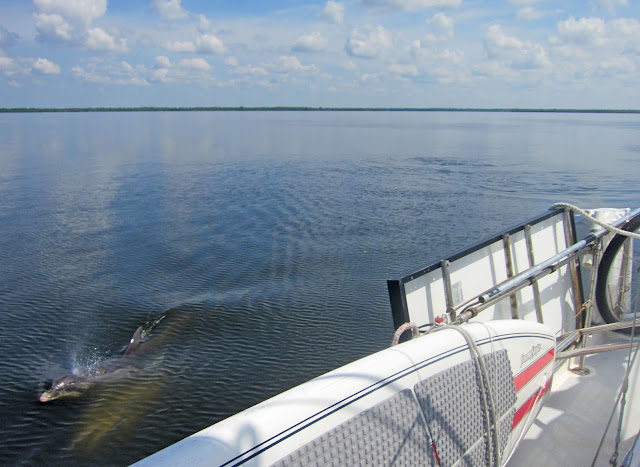 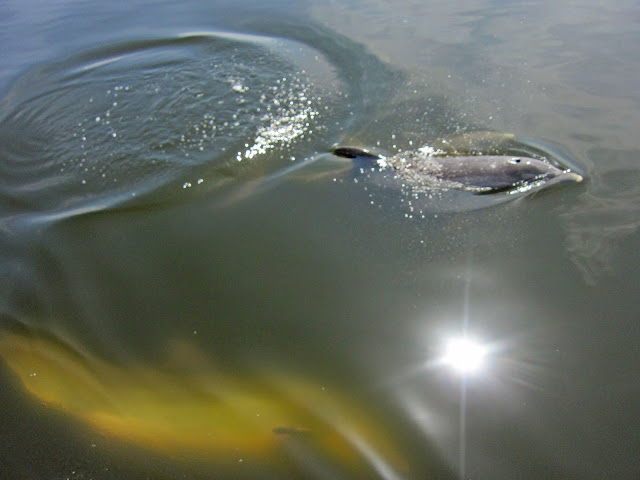 In order to reach the fresh water canal we motored Sanibel up to a gate with a concrete dock on our starboard side. After securing ourselves to the pylons, we activated the sequence by pulling down on and holding the triangle shaped ring. A recorded voice told us to stand by for the gate to open. Then we let loose of the dock and very slowly motored 40 feet or so into a fish bowl, we pulled on another lever and the recorded voice let us know the gate was closing. Once the gate closed another gate on the opposite end of the fish bowl opened. Water rushed in and out swirling around Sanibel’s exterior making is somewhat hard to hold her in place. Once the gates were open the recorded voice told us it was safe to proceed. On the other side of the gate again we had to tie off and finish the sequence by pulling the final triangle ring, which closed the last gate. We specifically remember our first time coming through this lock four years ago. It was nerve racking and didn’t go nearly so smooth. Now we can say we are a bit more seasoned…what a feeling. 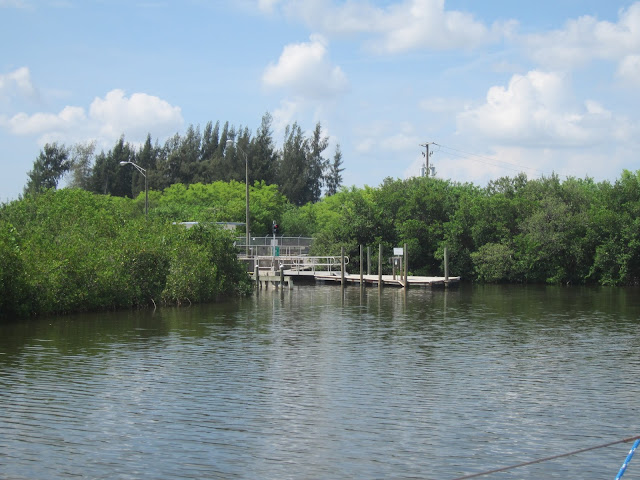 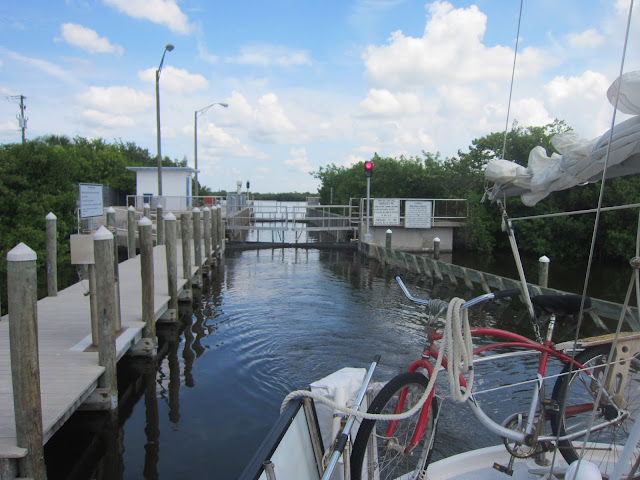 We arrived at the marina and rather than pulling Sanibel out right away, we opted to stay on the dock while we packed the van for our road trip and prepared Sanibel for her haul out. As always there are pros and cons, but all those were over taken when we quickly learned of one major con…no-see-ums. We were overtaken and night after night we’d close the boat up around 5pm and hunker down inside. Even then we learned that they were living at the sole and would come out at all hours of the day and night. We found ourselves bundling up in long pants and socks in 90 degree weather. One upside was we had shore power and ran a large room fan 24/7. 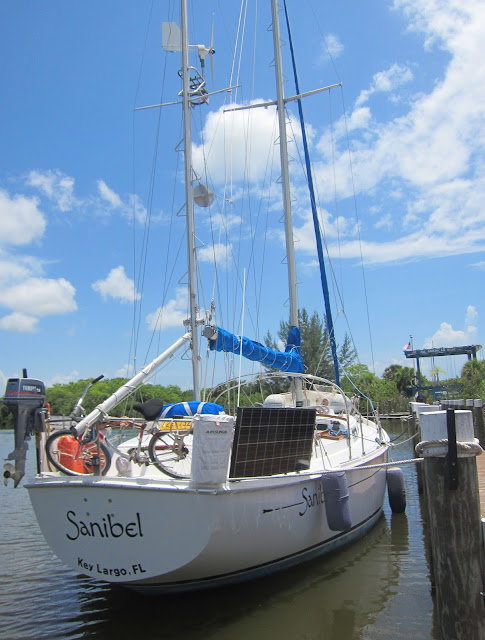 Six years ago we downsized from two homes in Colorado to one, then in 2011 we downsized  from one home to fitting all of our worldly possessions into a car, a Toyota pickup and a trailer. Finally in 2013 we began living in close proximity of 312 square feet. I never thought it could get any smaller than that until now.  The van is FULL – much more so than we had visualized. We tried to bring only what we had to have and still it’s tight with not a spare free corner. Jimi says “if it was easy, everyone would do it”. This is a challenge we both gladly accept.

During our week stay at the boat yard, good friend Ray invited us to steak at his beach resort time share and the following afternoon we met up with our previous neighbors for ice cream, Mike, Wendy and young Kaden. 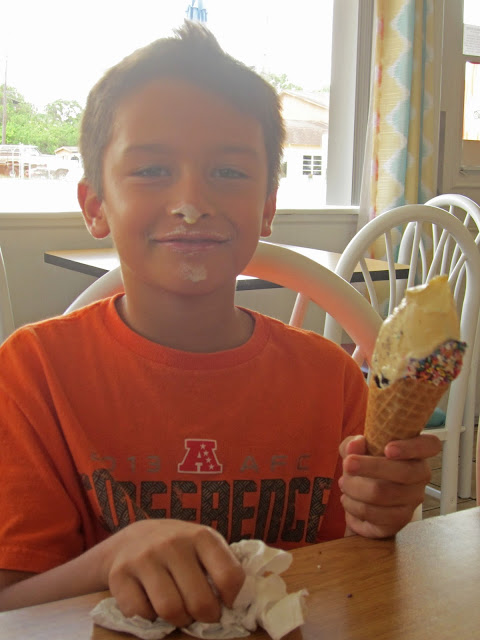 We enjoyed everyone’s company.  We also made friends with some turtles who followed us along the dock begging for food. They were fun. 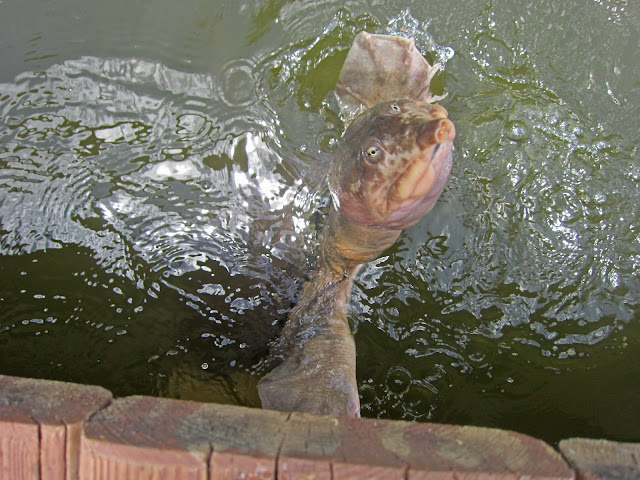 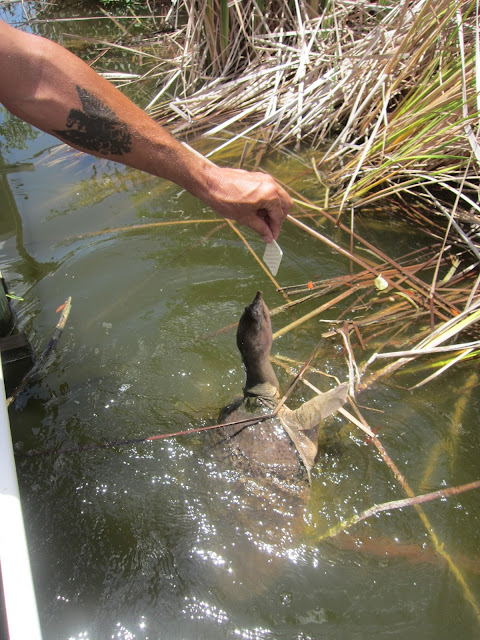 We were glad to get off the dock and Sanibel on dry storage at 2pm on Monday. Our plan was to hang out in the boat yard’s lanai that evening. We pulled out our propane cook stove to make dinner, took showers and right about sundown were viciously attacked by yet more no-see-ums. We scurried as fast as  we could to get us and all our stuff closed up in the van for a safe haven. Now what? We had a plan and this was not it. Without thinking about it or even talking about it we left the boat yard. Anywhere would have to be better. On our drive through North Port not even five miles away we began hearing strange noises coming from the engine. Jimi pulled over to check it out, however he couldn’t get the hood open…frustrated we drove further to only hear yet another disconcerting sound. Finally finding a gas station we pulled in and the hood opened right away. Everything seemed in good working order and later we discovered that the noise was probably coming from the air-conditioning unit.

We drove to the Sam’s club parking lot in Sarasota. We’d planned to sleep there for the night, settling about 10pm. We had a miserable time trying to sleep. It was H.O.T., we were crammed in close proximity to one another and the parking lot was well lit with street lights; all of these thing made it nearly unbearable to sleep. I think we both dozed for a few hours. At 1:30, I woke needing to use the bathroom, so Jimi drove me to a nearby 7-11. We then decided to move on to find a different place to sleep. We ended up at a rest area overlooking the water just outside of St Petersburg. There we slept among many semi trucks and some other passenger cars. It was nearly 3am.

When we woke at 7am the evidence of our boat yard attack was evident. My legs were covered in bites and I was beyond discomfort. Jimi insisted I take a Benadryl immediately and then we went in to the rest area bathrooms to get ready for our day.

The RAT (rediscover America tour) has started…not as well as we’d planned, but it’s not enough to discourage us. We’re confident as we get further North and adjust to the even smaller living space, all this misery will be behind us.

Stay tuned for our many adventures to come: 49 states in 4 months (that’s 12 states a month or 4 states a week).
Posted by Lorie Nicolaus at 9:14 AM