Our time in Marco Island

Marco Island: it’s small and wealthy; a little too rich for our liking. We were anchored in a small bay surrounded by condos and a strip mall for shopping. It took an hour or more to motor to this inward bay through canals bordered by single family homes. We were glad to be in there when the open seas were getting twenty knots of wind and we got nearly nothing.

We enjoyed walking to various places as most everything was close. We walked to Wells Fargo, the U.S. Postal Service, Publix and West Marine just to name a few. I was excited to check out a second hand store, but was disappointed when I saw their prices. Nothing beats the second hand store prices in Nebraska. I suppose that’s what I’m used to now. 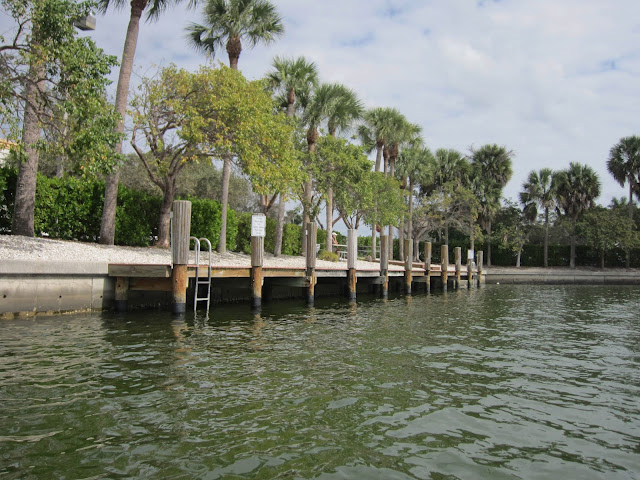 The Winn Dixie dinghy dock. Very convenient to get groceries. 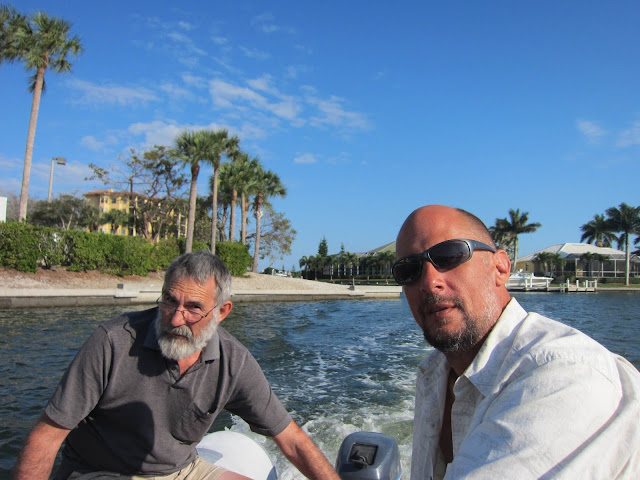 On our way back to our boats. 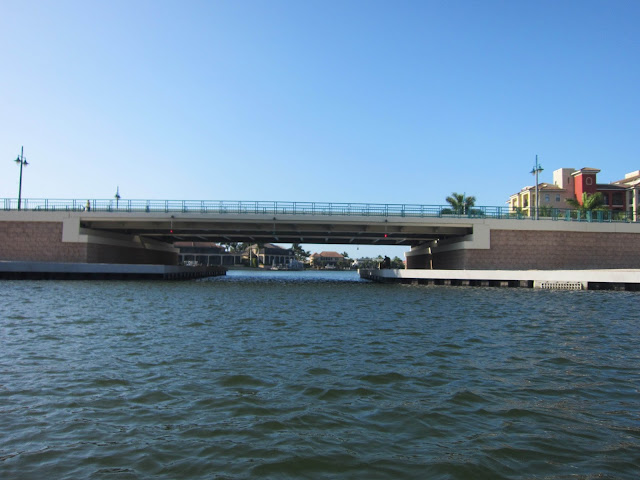 We have to go under the bridge.

When we first arrived we stopped for coffee and a bite to eat at Mangos. It was good and right on the water. I watched Sanibel as we ate. 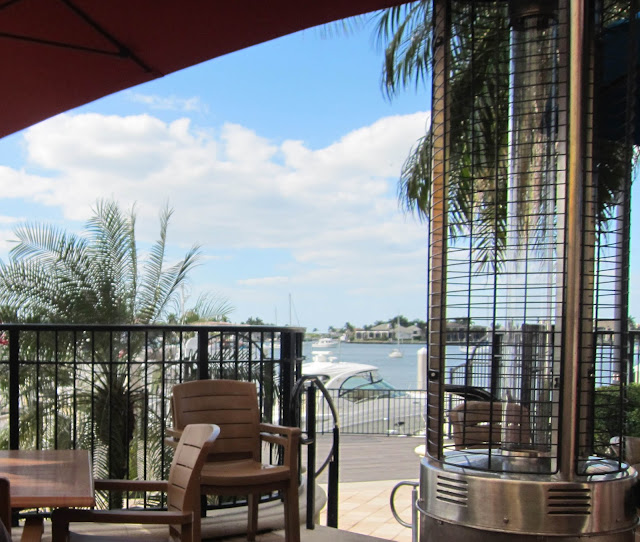 The view from Mangos.

I took Jimi’s bicycle and rode to the other end of the island two miles away to spend a few hours at the public library. It was nice to get away and the bike ride was good too.

And then we have many days of no play and all work. 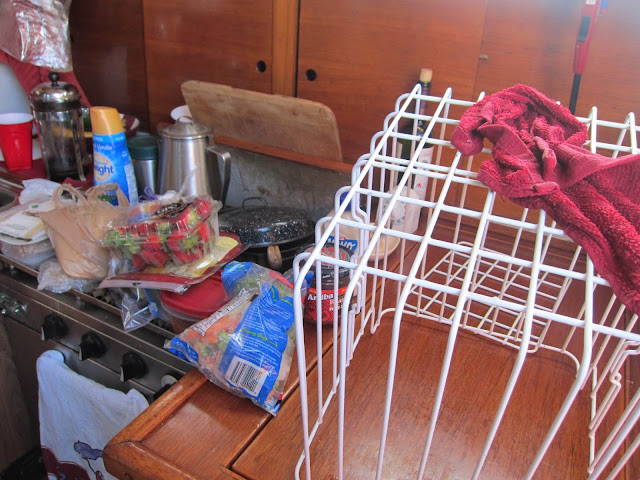 I have to clean the fridge one or two times a week. Everything comes out including the wire rack. I use bleach water to clean everything. 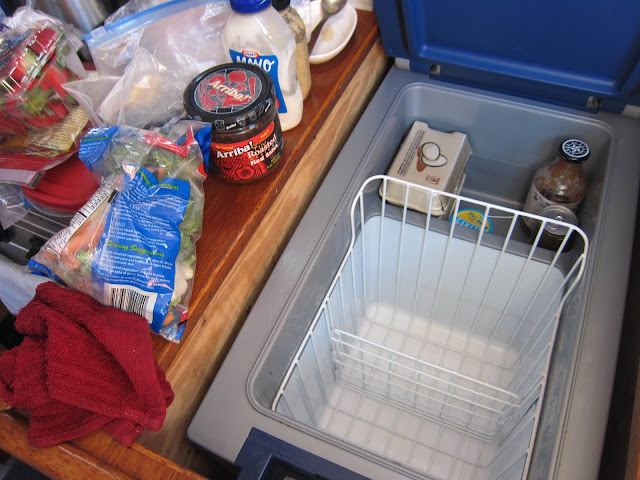 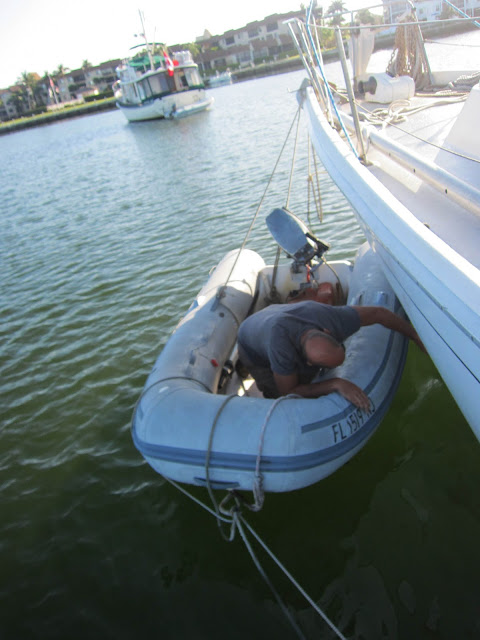 On Wednesday we walked 2+ miles to the beach. While there were a lot of people, there were also a lot of shells and I hadn’t brought my shell bag. I was bummed. We walked a while enjoying the sand, fresh sea air and the scenery. On our way back we stopped at Doreen’s Cup of Joe. Doreen’s is where it’s at. Jimi and I each ordered a cappuccino (I drank mine and half of his) and we shared a burrito. Both the coffees and the burrito were great! Thumbs up to Doreen. 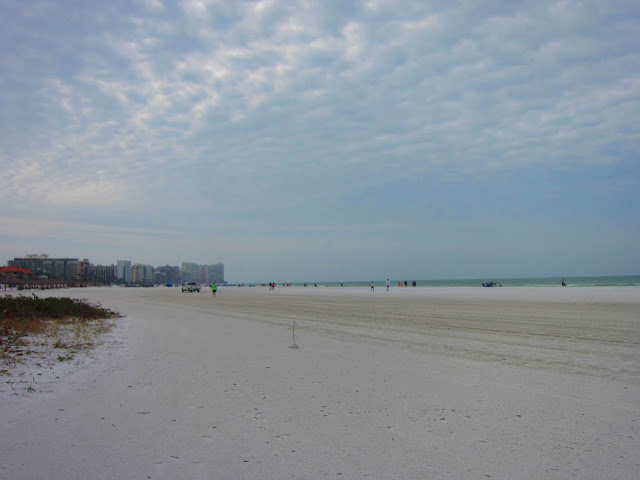 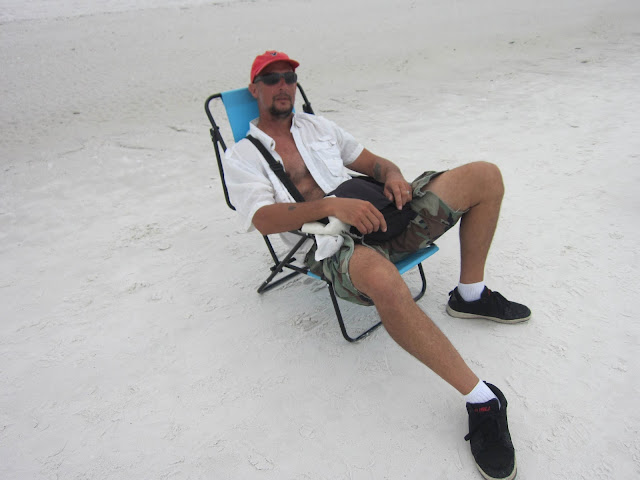 Jimi found a couple of chairs by the trash.. 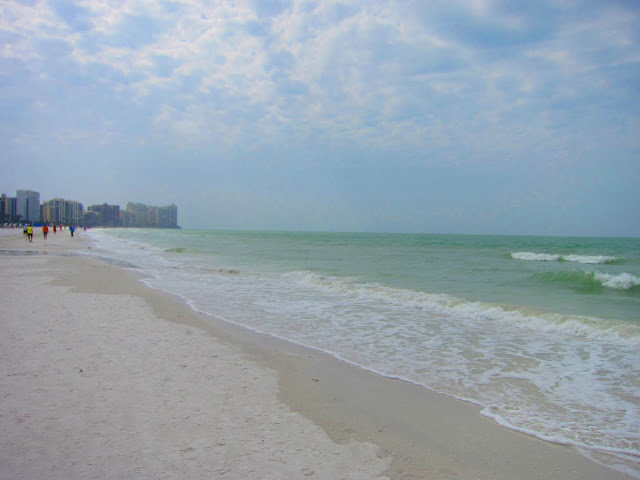 The tide was out, the wind was blowing and we love the beach.

Bob made arrangements with the marina to let us have showers, so we each got in two showers during the week we were there. We tried to use the internet, but it wasn’t working, which is why I went to the library one morning.

Coconut are everywhere. After nearly a year of giving Jimi the Coco Jack as a gift, he was finally able to use it. We tried it out for the first time. 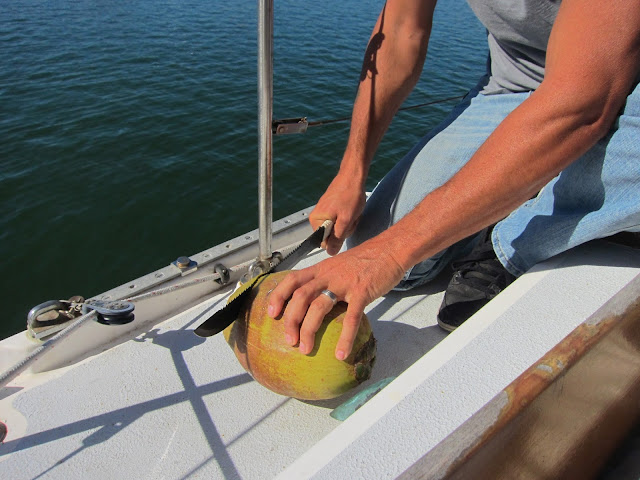 First he has to cut some off the end... 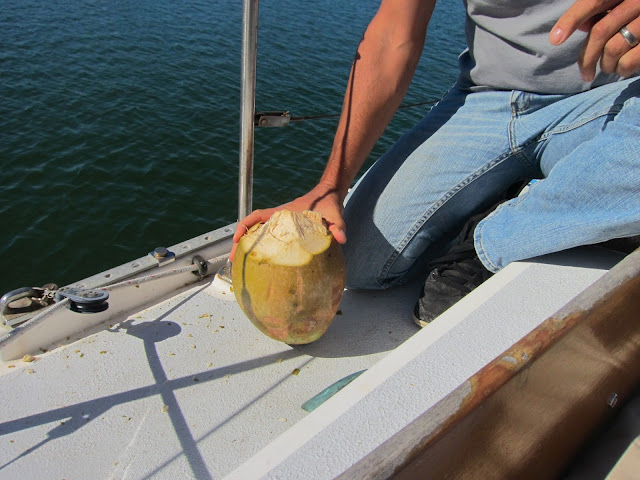 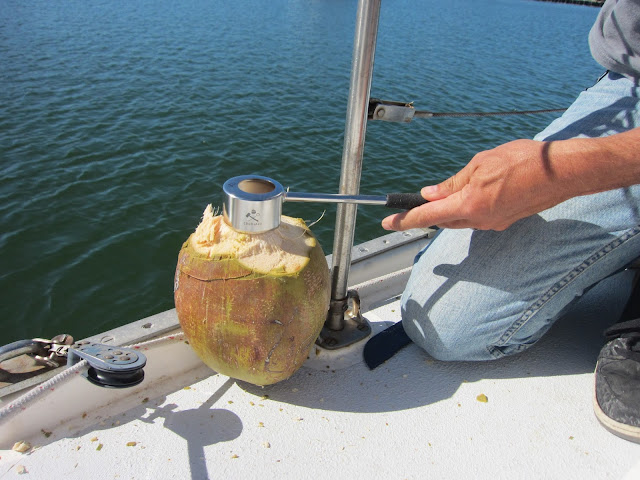 Then he takes his tool and pounds a few times... 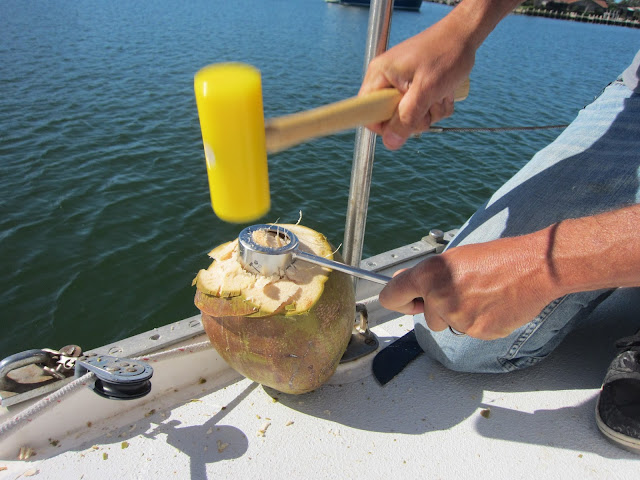 ...until the tool in embedded in the coconut. 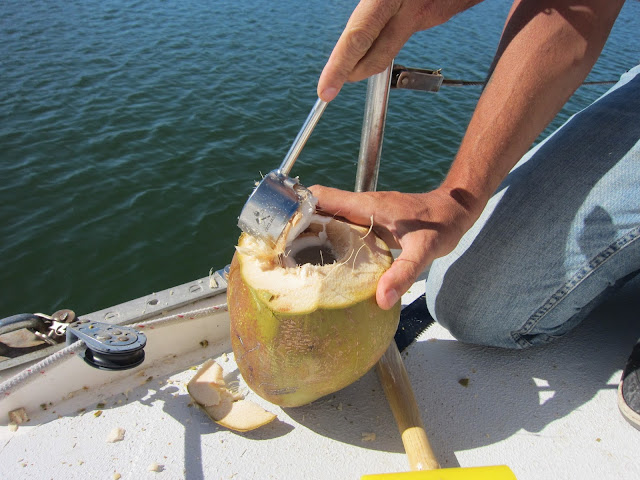 Then he opens the coconut by pulling the handle of the tool in an upwards direction. 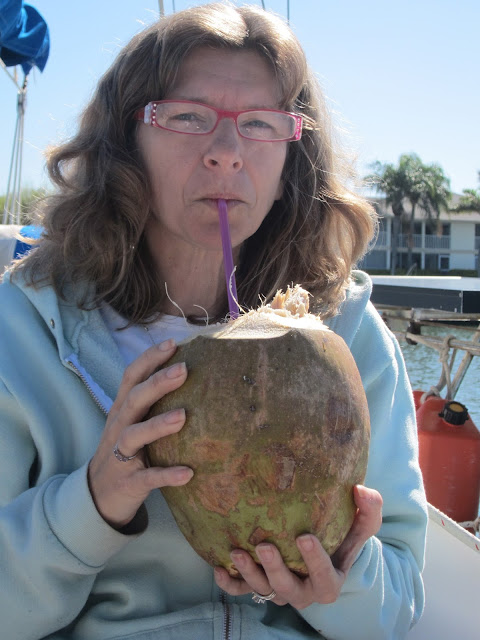 Waa Laa - get a straw and enjoy. 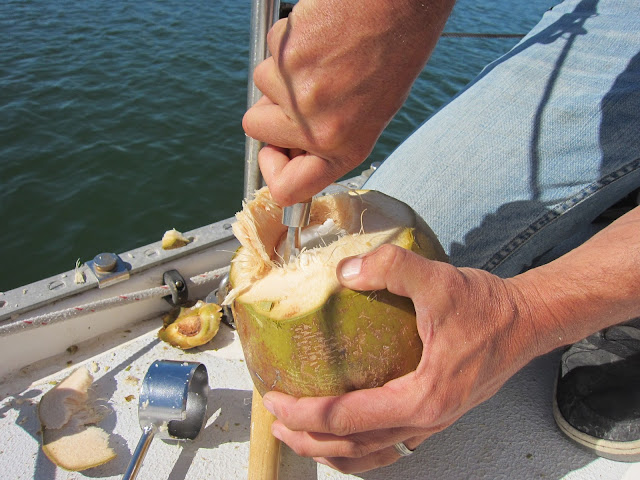 If you want some coconut meat. scrape it out with the next tool. 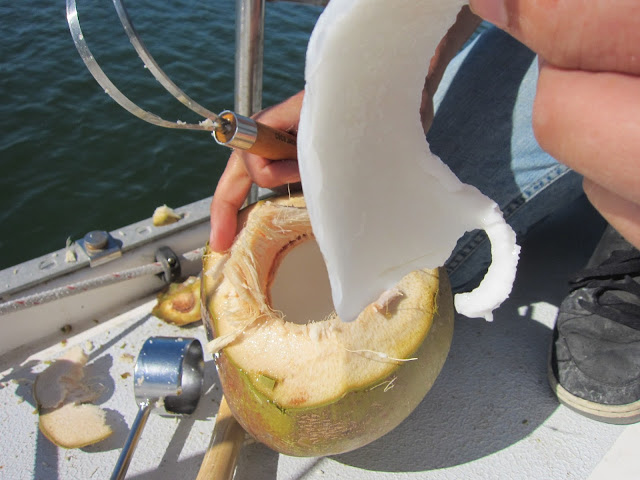 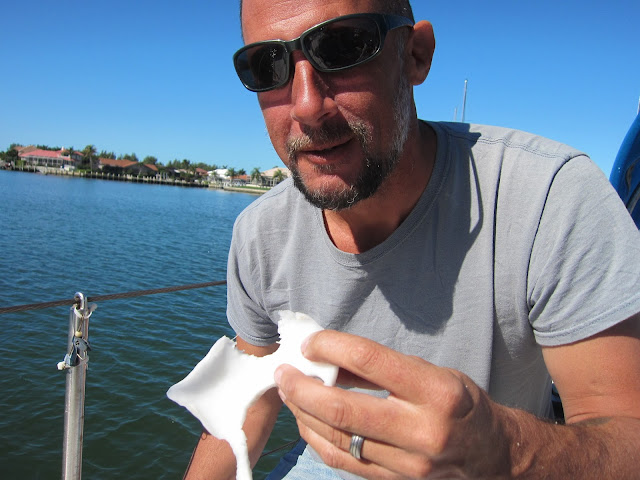 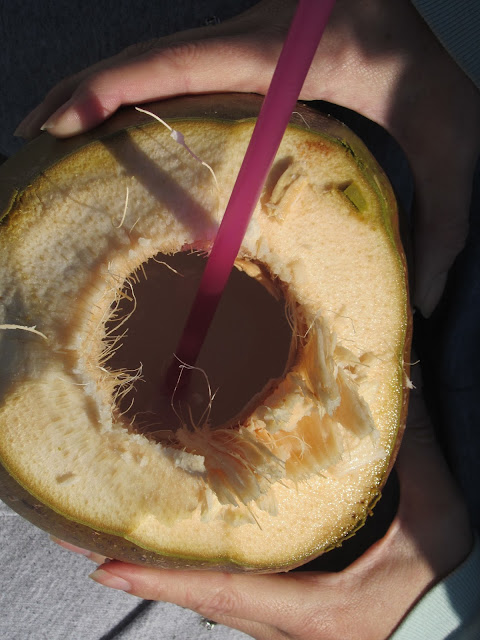 I love these tool and we're so please they worked so well.
Thank you Shark Tank and Coco Jack.

We left the bay area around 3 pm Saturday anchoring just outside the canals to stage ourselves for our real departure. Then at 9 pm we pulled anchor again and set sail. We sailed through the night…finally arriving at Key West, Florida at 2 pm on Sunday.

We’re not certain how long we’ll stay here – maybe a few weeks to a month or more. For now, we’re happy to be back in one of our favorite places.
Posted by Lorie Nicolaus at 6:07 PM