Our visit with Daniel

We survived the cold front last weekend spending nearly five days curled up in Sanibel. We managed to sneak out Friday evening to stock up on some groceries, as we were down to the bare minimum and didn't even have any spam to save us. For nearly 20 hours on Saturday we rocked with 30 mph winds. Our anchor held strong this time as well as my tummy. I made an apple pie and homemade beef stew on Sunday to help heat the cabin. The smells were wonderful in such a small area. For two days our lows were 36 degrees and our highs were 61 degrees. We handled it well, but mornings were definitely the hardest.

Monday morning we ventured out to what we thought would be a few hours to shower and do laundry. Jimi had planned to clean the pickup, so he could sell it. After completing our list of 'to dos' and a couple of beers on friend Gary's boat we finally got back to Sanibel about 4pm. This schedule brought us an extremely late lunch and dinner consisted of cheese and crackers about 9pm.

We find ourselves going to bed earlier and earlier every night and likewise waking earlier. I guess it is to be expected with such a lifestyle.

Jimi picked Daniel up from the airport on Tuesday. He is here for one week. We ventured out in the dingy on Wednesday and explored an secluded stretch of beach. We found several coconuts, cracked a couple open and ate them. We need to do some more research on proper storage though. 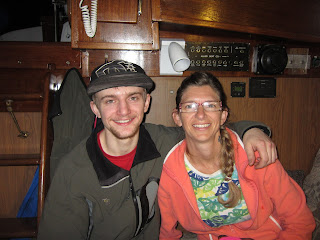 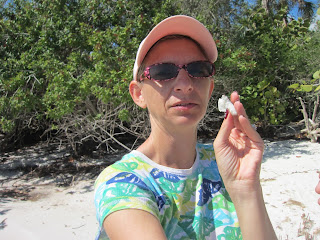 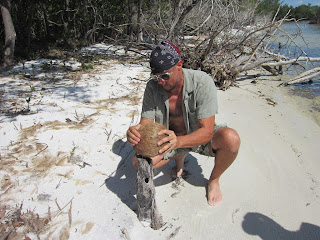 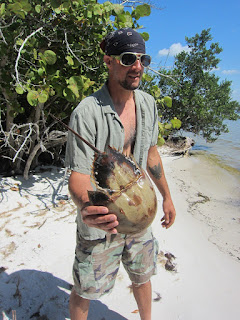 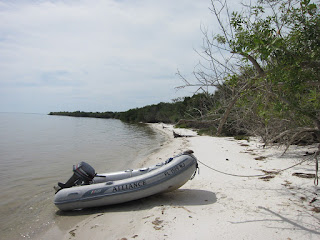 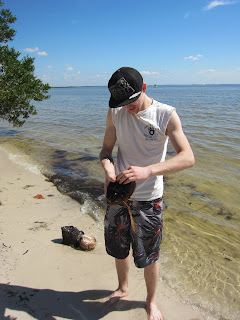 Thursday we went to Sam's Club and Wal-Mart to provision. Check out our provisioning list on our blog.  http://dogbonegraphics.com/blog/?p=3126   The back of the pickup was completely full. We unloaded at the park taking up two large picnic tables. Jimi and Daniel hauled items to Sanibel in the dingy while I stayed at the park to remove all cardboard, even the mac-n-cheese boxes had to be opened and the contents placed in zip lock bags. Twenty five pounds of rice and forty pounds of flour had to be broken down into smaller and more manageable containers. I wrote the contents of all canned goods on the tops of the cans, so if the labels fall off we will still know what everything is. Once on Sanibel we had to store everything, which wasn’t easy. We still have a few things without homes, but we’ll figure them out.

Friday our friend Ray boarded and we went on a long sail leaving about 10 am and returning about 5:30 pm. We raised the main sail for the first time, the mizzen sail and the genoa sail all at the same time. We reached 7.2 nautical knots and at times reached a maximum heel of 20 degrees; however, our average heel was more like 12 degrees. It’s not so bad being on deck in the cock pit, but it’s kind of gnarly below. I managed to cook lunch for the guys taking advantage of our gimbaled stove, which looked like it was about to lay on its side. It was weird to see the stove so tilted, but really the stove remained level and the boat was leaning. We had fun, but at the end of the day we were all beat and went to bed early. 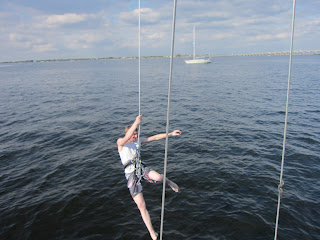 Daniel is having a good time and we are real glad he’s is here.

Here is a link to the video Jimi made of the outside of Sanibel. He hasn't had a chance to make the inside video yet, but he will, so stay tuned. Click here for the video http://dogbonegraphics.com/blog/?p=3116